A bhaptics integration mod into The Walking Dead Saints & Sinners

This programm reads the memory of a different process which is often classified as suspicious behavior by Anti-Virus programms. This could lead to false-positive Anti-Virus alerts. Make sure to add the .exe to the exception list if Windows Defender or some other Anti-Virus don’t let you run it.

You don’t trust the .exe? Just run the python script and check the code by yourself. 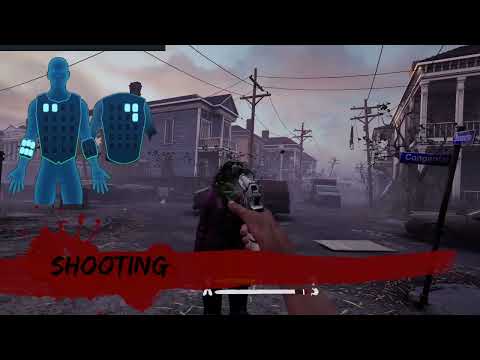 How To Use (easy)

How To Use (using a Python interpreter)

Don’t want to run a prebuild .exe? This is a python project so just clone the repo and run the starter.py with a Python3.9 interpreter instead of the binary. You need to install the following dependencys:

This mod is more like what is often called a “Trainer”, so it reads certain memory addresses of the game. This leads to the following issues:

Will this mod be updated for upcoming updates of the game?

Probably not. It is very likely that the smallest update shifts the memory offsets, which means that the whole mod is not working anymore. Finding these offsets was the main workload creating this mod. Since it is OpenSource you are welcomed to search for broken offsets by yourself and therefore help me to fix it!

Thanks to Florian Fahrenberger for his heavy testing and the haptic-patterns!

If you have any suggestions, feel free to open an Issue. Or contact me (McFredward) in the bHaptics Discord.