baikal is written in pure Python. It supports Python 3.5 and above.

baikal is a graph-based, functional API for building complex machine learning pipelines of objects that implement the scikit-learn API. It is mostly inspired on the excellent Keras API for Deep Learning, and borrows a few concepts from the TensorFlow framework and the (perhaps lesser known) graphkit package.

baikal aims to provide an API that allows to build complex, non-linear machine learning pipelines that looks like this: 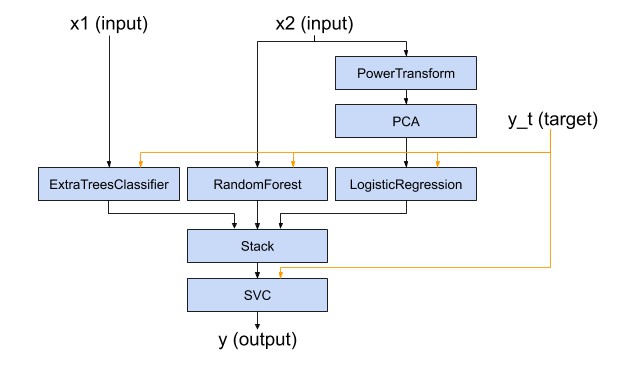 What can I do with it?

With baikal you can

All with boilerplate-free, readable code.

The pipeline above (to the best of the author's knowledge) cannot be easily built using scikit-learn's composite estimators API as you encounter some limitations:

Perhaps you could instead define a big, composite estimator class that integrates each of the pipeline steps through composition. This, however, most likely will require

By using baikal as shown in the example above, code can be more readable, less verbose and closer to our mental representation of the pipeline. baikal also provides an API to fit, predict with, and query the entire pipeline with single commands, as we will see below.

Without further ado, here's a short example of a simple SVC model built with baikal:

As shown in the short example above, the baikal API consists of four basic steps:

Let's take a look at each of them in detail. Full examples can be found in the project's examples folder.

A step is defined very easily, just feed the provided make_step function with the class you want to make a step from:

You can make a step from any class you like, so long that class implements the scikit-learn API.

For example, to make a step for sklearn.linear_model.LogisticRegression we do:

Other steps are defined similarly (omitted here for brevity).

Once we have defined the steps, we can make a model like shown below. First, you create the initial step, that serves as the entry-point to the model, by calling the Input helper function. This outputs a DataPlaceholder representing one of the inputs to the model. Then, all you have to do is to instantiate the steps and call them on the outputs (DataPlaceholders from previous steps) as you deem appropriate. Finally, you instantiate the model with the inputs/outputs (also DataPlaceholders) that specify your pipeline.

This style should feel familiar to users of Keras.

Note that steps that require target data (like ExtraTreesClassifier, RandomForestClassifier, LogisticRegression and SVC) are called with two arguments. These arguments correspond to the inputs (e.g. x1, x2) and targets (e.g. y_t) of the step. These targets are specified to the Model at instantiation via the third argument. baikal pipelines are made of complex, heterogenous, non-differentiable steps (e.g. a whole RandomForestClassifier, with its own internal learning algorithm), so there's no some magic automatic differentiation that backpropagates the target information from the outputs to the appropriate steps, so we must specify which step needs which targets directly.

(*) Steps are called on and output DataPlaceHolders. DataPlaceholders are produced and consumed exclusively by Steps, so you do not need to instantiate these yourself.

Note: Currently, calling the same step on different inputs and targets to reuse the step (similar to the concept of shared layers and nodes in Keras) is not supported. Calling a step twice on different inputs will override the connectivity from the first call. Support for shareable steps might be added in future releases.

Now that we have built a model, we are ready to train it. The model also follows the scikit-learn API, as it has a fit method:

The model will automatically propagate the data through the pipeline and fit any internal steps that require training.

To predict with model, just pass the input data like you would for the fit method. The model will automatically propagate the inputs through all the steps and produce the outputs specified at instantiation.

Models are query-able. That is, you can request other outputs other than those specified at model instantiation. This allows querying intermediate outputs and ease debugging. For example, to get both the output from PCA and the ExtraTreesClassifier:

You don't need to pass inputs that are not required to compute the queried output. For example, if we just want the output of PowerTransformer:

Models are also nestable. In fact, Models are steps, too. This allows composing smaller models into bigger ones, like so:

Like sklearn objects, models can be serialized with pickle or joblib without any extra setup:

Keep in mind, however, the security and maintainability limitations of these formats.

Currently, baikal also provides a wrapper utility class that allows models to used in scikit-learn's GridSearchCV API. Below there's a code snippet showing its usage. It follows the style of Keras' own wrapper. Here is an example script of this utility.

A future release of baikal plans to include a custom GridSearchCV API, based on the original scikit-learn implementation, that can handle baikal models natively, avoiding a couple of gotchas with the current wrapper implementation (mentioned below).

Currently there are a couple of gotchas:

For the example above, it produces this: 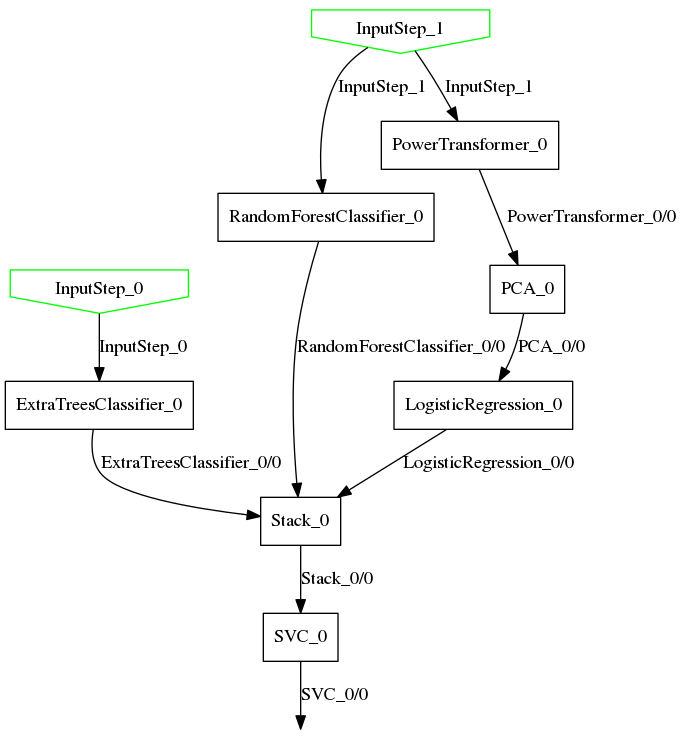 In order to use the plot utility, you need to install pydot and graphviz.

Similar to the the example in the quick-start above, stacks of classifiers (or regressors) can be built like shown below. Note that you can specify the function the step should use for computation, in this case function='predict_proba' to use the label probabilities as the features of the meta-classifier.

The API also lends itself for more interesting configurations, such as that of classifier chains. By leveraging the API and Python's own control flow, a classifier chain model can be built as follows:

Sure, scikit-learn already does have ClassifierChain and RegressorChain classes for this. But with baikal you could, for example, mix classifiers and regressors to predict multilabels that include both categorical and continuous labels.

Setting up the development environment