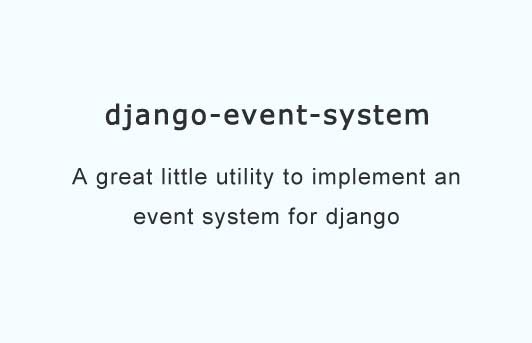 django-event-system utilizes gevent to build out an easy to use event system. This event system uses strings to track events and call event handlers.

Why not just use django's built in signals?

Unlike django signals, django-event-system utilizes a string based system for events. This allows developers to listen using regular expressions, and add a slightly nicer interface to interact and deal with events. For example you can create events like event::db::Model::created, event::db::Model::updated, and event::db::Model::deleted and have a listener that listens for event::db::Model::.*. This listener will handle all of the defined events.

To get started add "events" to your installed_apps in settings.py. That's really it.

Important note about gevent and monkey_patch

Django event system does not use gevent's monkey patch utility anywhere. If you want to monkey patch (and I recommend you do), you need to do it yourself.

The Dispatcher is the central peice to django-event-system, every single event goes through the dispatcher. While there really isn't a need to use the dipsatcher directly, you can. The dispatcher manages the event queue, the handlers, and dispatching the event.

In order to start using the dispatcher, you first need to define your handlers:

This will define a handler that will respond to event::name events. The handler object must be a callable object (like a function or a class with __call__ defined).

While it is not necessary, I recommend that you use :: rather than . in your event handlers because the string you pass into register handler gets compiled into regular expression. If you want to base events off of a class and its module, there is a utility called GetPathFromClass you can use.

You can also, define a handler that responds to multiple events by using regular expressions:

To Dispatch an event, all you need to do is call Dispatcher.Dispatch('event::name'). This call will call every listener that is waiting for that event.

If you need to pass arguments to an event handler, all you need to is: Dispatcher.Dispatch('event::name', *args, **kwargs)

Because django-event-system is based off of gevent, its possible that the queue doesn't get cleared. If you want to force the queue to be cleared after a function, you should use the Dispatcher.EnsureQueueIsCleared decorator. This will run your function first and then clear the queue. If you don't want to use the wrapper, you can use the Dispatcher.ClearQueue method instead.

The Event class is really just here to stop you from making mistakes. All the Event class does is build a string for your event and gives you a Dispatch helper.

If you want to give your event classes a different name, you can just define the Name property on the class:

If you want to pass data using an Event class, use the __init__ method to capture the input:

Then when dispatching: ExampleEvent.Dispatch('name', 'value, 'something'). This will pass an ExampleEvent object to the handler with name, value, and something defined.

This class sets up an event listener for you. If you use this class, you don't need to do anything more than define a listensFor list and a handle method. The handle method will recieve the event that triggered the handler:

Then, when you call ExampleEvent.Dispatch, ExampleEventListener's handle method will automatically get called, with event refering to the ExampleEvent that triggered the handler.

The listensFor list can contain both Event objects and strings. These will also be compiled into regular expressions. This allows you to have an EventListener listen for all events for example:

In order to respond to model events, I implemented a Model observer class called Observer. Using this model, you can respond to events such as creating, created, updating, updated, deleting, deleted a given model. And Observer has a method that corresponds to those events and recieves a Model object. To use a model Observer, simply inherit from the Observer class and define a observes model:

When you preform an action on a Model that is being Observed, an event with the style events::db::path::to:ModelClass::* will be created. For example, the event for creating an Example object will be, events::db::my::models::Example::creating. You can define other EventListeners to listen for these events. For example here is a listener that listens for any model that is created:

One thing to note is that only objects that have an Observer defined will create events. If you want a Model to dispatch events without defining an Observer, you can use RegisterSignalsFor to map the signals to Events:

Now the signals will dispatch events. I recommend doing this as early in your application as possible.

I recommend you keep all of your app observers in an observer directory. Then inside that dir's __init__.py import all of your observers.

In django, if you try to use Models before the application is ready, then you will get the infamous django.core.exceptions.AppRegistryNotReady: Apps aren't loaded yet. exception. To solve this, go to apps.py in your django app and define a ready method. Inside this method, import your observers like so: import myapp.observers. Then in the app's __init__.py file put this code: default_app_config = 'myapp.apps.MyAppConfig'. Wnen the models are ready, the observers will get registered! So you apps.py should look like this:

If the Model doesn't have an observer, no events will be dispatched for that model. In order to make un-observed models dispatch events, use the RegisterSignalsFor function. This function juust takes a model class and will register all the signal objects and map them to an event based on the model's name.

Django commes with it's own signal ideas. If you want to listen for some event in django, you would use a signal. But, as these signals are object based, its more boiler plate to listen to multiple signals or to listen to a class of events.

But django is based on signals, so in order to make it easier to just use events instead, django-event-system comes with SignalToEvent to help convert a signal to an event. Basically, this just connects a listener to a signal and then dispatches an event. The way this works is like so:

If you want to handle events from a specific sender, you can also define a sender on the SignalToEvent call:

And finally, sometimes you just want to have more complex event dispatching. For that you can define a hook:

the hook function must return an event or a string!

Note: Do not call Event.Dispatch inside of a hook function. If you do, the event will be dispatched twice!

If you would like to test that certain events are raised during the course of your unit tests, django-event-system provide several utilies to make that easier.

This decorator mocks and puts the Dispatcher into a test mode. In side this environment, you are able to use a function like Dispatcher.Expect().

This lets the dispatcher know you are looking for this event, but to not actually call the listeners on the event. If the event is never called, the test will fail and the message will tell you exactly what events where not raised.

Austin is a Python frame stack sampler for CPython written in pure C.

Jesse is an advanced crypto trading framework which aims to simplify researching and defining trading strategies.

A module for Django that helps you to build pattern libraries and follow the Atomic design methodology.

Give it a blockchain based crypto wallet address and it will crawl 3 levels deep in transaction data to plot a graph out of the information.