A LARS implementation in PyTorch.

LARS (Layer-wise Adaptive Rate Scaling) is an optimization algorithm designed for large-batch training published by You, Gitman, and Ginsburg, which calculates the local learning rate per layer at each optimization step. According to the paper, when training ResNet-50 on ImageNet ILSVRC (2016) classification task with LARS, the learning curve and the best top-1 accuracy stay similar to that of the baseline (training with batch size 256 without LARS) even if the batch size is scaled up to 32K.

Originally, LARS is formulated in terms of SGD optimizer and extension to other optimizers was not mentioned in the paper. In contrast, torchlars implements LARS as a wrapper which can take any optimizers including SGD as the base.

Additionally, LARS of torchlars is designed to more consider operation in the CUDA environment compared to existing implementations. Thanks to this, you can see only the little speed loss appears compared to just using SGD, in an environment where CPU to GPU synchronization does not occur.

To use torchlars, install it via PyPI:

To use LARS, simply wrap your base optimizer with torchlars.LARS. LARS inherits torch.optim.Optimizer, so you can simply use LARS as optimizer on your code. After then, when you call step method of LARS, LARS automatically calculates local learning rate before running base optimizer such as SGD or Adam

The example code below shows how to use LARS using SGD as base optimizer. 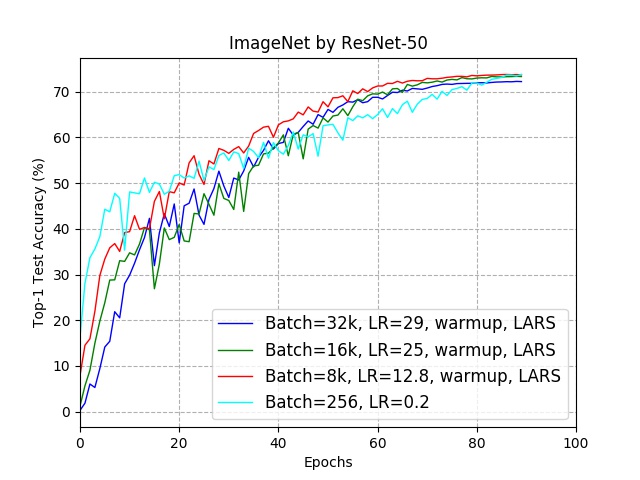 Above image and table show the reproduced performance benchmark on ResNet-50, as reported in Table 4 and Figure 5 of the paper.

The cyan line represents the baseline result, which is training result with batch size 256, and others represent training result of 8K, 16K, 32K respectively. As you see, every result shows a similar learning curve and best top-1 accuracy.

Most experimental conditions are similar to used in the paper, but we slightly change some conditions like learning rate to observe comparable results as proposed by the LARS paper.

Note: We refer log file provided by paper to obtain above hyper-parameters.