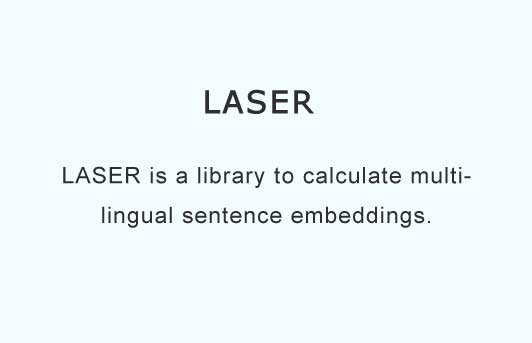 LASER is a library to calculate multilingual sentence embeddings.

Currently, we include an encoder which supports nine European languages:

All these languages are encoded by the same BLSTM encoder, and there is no need to specify the input language (but tokenization is language specific). According to our experience, the sentence encoder supports code-switching, i.e. the same sentences can contain words in several different languages.

We have also some evidence that the encoder generalizes somehow to other languages of the Germanic and Romanic language families (e.g. Swedish, Norwegian, Afrikaans, Catalan or Corsican), although no data of these languages was used during training.

A detailed description how the multilingual sentence embeddings are trained can be found in.

Python 3 with NumPy
PyTorch 0.40
Faiss (for mining bitexts)
tokenization from the Moses encoder and byte-pair-encoding

This is the Tensorflow implementation of Convolutional Pose Machines, one of the state-of-the-art models for 2D body and hand pose estimation.

Starter code in PyTorch for the Visual Dialog challenge.