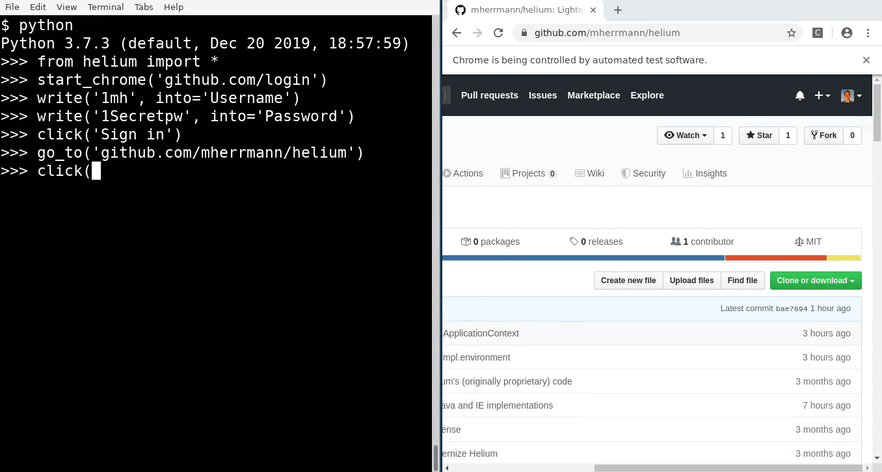 Helium is a Python library for automating web browsers. For example:

Under the hood, Helium forwards each call to Selenium. The difference is that Helium's API is much more high-level. In Selenium, you need to use HTML IDs, XPaths and CSS selectors to identify web page elements. Helium on the other hand lets you refer to elements by their user-visible labels. As a result, Helium scripts are 30-50% shorter than similar Selenium scripts. What's more, they are easier to read and more stable with respect to changes in the underlying web page.

Because Helium is simply a wrapper around Selenium, you can freely mix the two libraries. For example:

So in other words, you don't lose anything by using Helium over pure Selenium.

In addition to its high-level API, Helium simplifies further tasks that are
traditionally painful in Selenium:

To get started with Helium, you need Python 3 and Chrome or Firefox.

If you already know Python, then the following command should be all you need:

Otherwise - Hi! I would recommend you create a virtual environment in the
current directory. Any libraries you download (such as Helium) will be placed
there. Enter the following into a command prompt:

This creates a virtual environment in the venv directory. To activate it:

Now enter python into the command prompt and (for instance) the commands in
the animation at the top of this page (from helium import *, ...).

I've compiled a cheatsheet that quickly teaches you all
you need to know to be productive with Helium.

If you use an IDE such as PyCharm, you should get auto-completion and
documentation for Helium's various functions. Otherwise, please look at
this Python file. It lists all of Helium's public
functions. I have not yet had time to bring this into a more readable state,
sorry.

Status of this project

I have too little spare time to maintain this project for free. If you'd like
my help, please go to my web site to ask about my
consulting rates. Otherwise, unless it is very easy for me, I will usually not
respond to emails or issues on the issue tracker. I will however accept and
merge PRs. So if you add some functionality to Helium that may be useful for
others, do share it with us by creating a Pull Request. For instructions, please
see below.

Pull Requests are very welcome. Please follow the same coding conventions as the
rest of the code, in particular the use of tabs over spaces.

Before you submit a PR, ensure that the tests still work:

This runs the tests against Chrome. To run them against Firefox, set the
environment variable TEST_BROWSER to firefox. Eg. on Mac/Linux:

If you do add new functionality, you should also add tests for it. Please see
the tests/ directory for what this might look like.

FuzzBench is a free service that evaluates fuzzers on a wide variety of real-world benchmarks, at Google scale.

hypothesis-auto is an extension for the Hypothesis project that enables fully automatic tests for type annotated functions.

Dashboard to track the spread of the coronavirus, based on three data sources, built with shinyMobile and echarts4r.