The PySpectrometer is a Python (OpenCV and Tkinter) implementation of an optical spectrometer. The motivation beind this project was to build a tool that could measure the wavelength of home-made Dye Lasers and perform some fluorescence spectroscopy.

The hardware is simple and widely avilable and so should be easily to duplicate without critical alignment or difficult construction. The hard work was developing the software.

Resolution/accuracy seems to be +/- a couple of nm or so, pretty reasonable for the price of the hardware, especially when you consider the price of commercial components such as the Hamamatsu C12880MA breakout boards which run north of 300 bucks, and has a resolution of 15nm. Of course, this build is physically much larger, but not enormous! 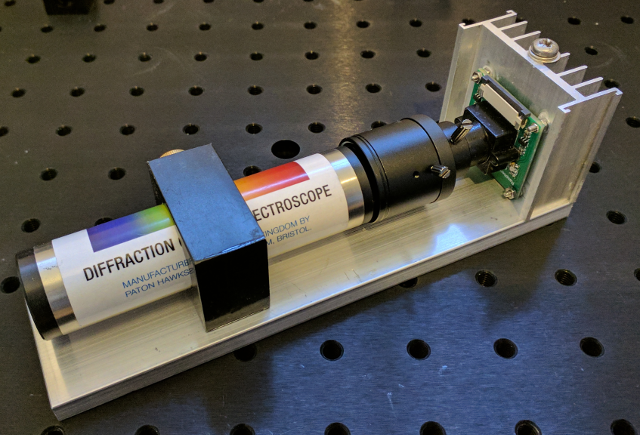 The hardware consists of:

A Raspberry Pi Camera (with an M12 Thread)
https://thepihut.com/products/raspberry-pi-camera-adjustable-focus-5mp

Everything is assembled on an aluminium base (note the Camera is not cooled, the heatsink was a conveniently sized piece of aluminium.) 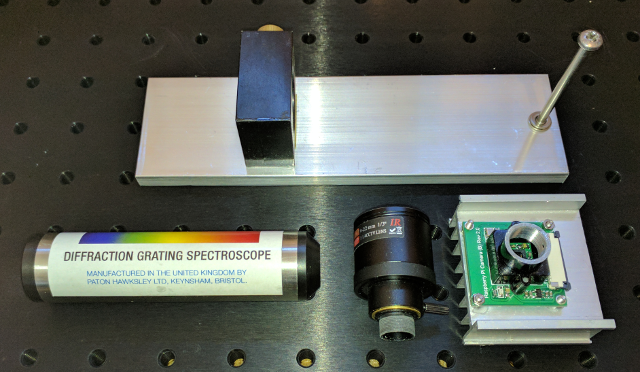 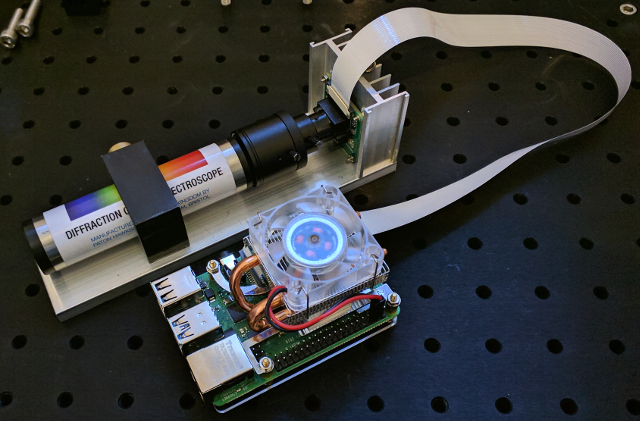 Developed and tested on: 2021-01-11-raspios-buster-armhf-full.img for anything else your milage may vary!

(Note the software uses the Linux Video Driver, not the Picam Python module. As a consequence it will work with some webcams on probably any Linux box (Tested on Debian with a random webcam))

First attach the Picam, and enable it with raspi-config

Run the program with: python3 pyspectrometer-v1.py

To calibrate, shine 2 Lasers of known wavelength (He-Ne, Argon or DPSS recommended! (Diode Lasers can have wavelengths that can be +/- several nm!)) at a piece of card in front of the spectrometer.

Click the two peaks on the graph, and in each of the boxes enter the corresponding wavelength. Then hit 'Calibrate'. In this example I have Calibrated with 532nm (DPSS) and 633nm He-Ne. The Scale and lablels will then adjust to match your values.

For good accuracy make sure your wavelengths are quite far apart, ideally one at the red end and one at the blue end 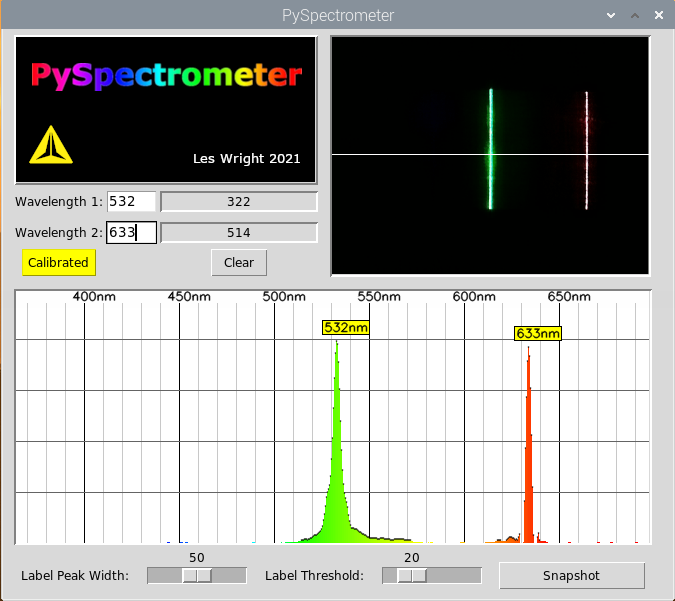 Alternatively, you may use a Fluorescent tube (or any other gas discharge tube) in front of the Spectrometer, you will have to research the wavelengths of the emission lines (Mercury for Fluorescent tubes, Neon, Argon, Xenon for other types) That will be an excercise for you!

"Label Peak width" and "Label threshold" set the width of a peak to label, and the level to consider it a peak respectively. The Defaults are fine, but if you find the graph too cluttered, you can play with these values.

Snapshot, takes a snapshot of the graph section like this: 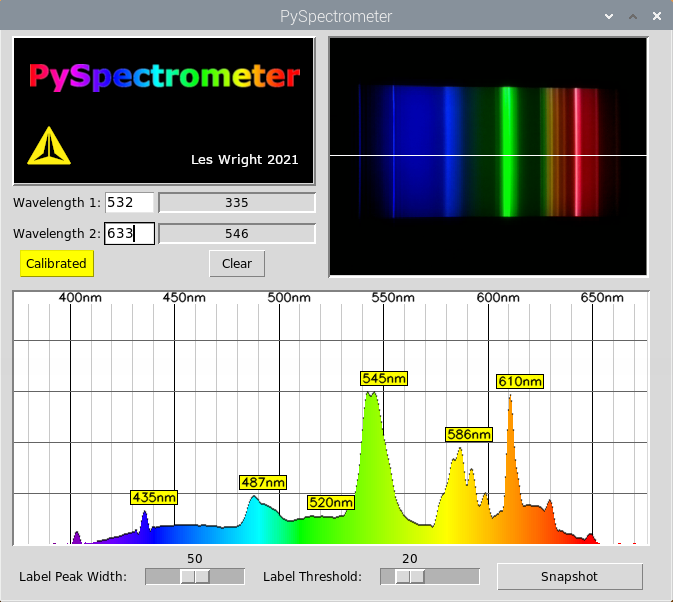 Measuring the wavelength of a cheap red laser pointer (661nm) 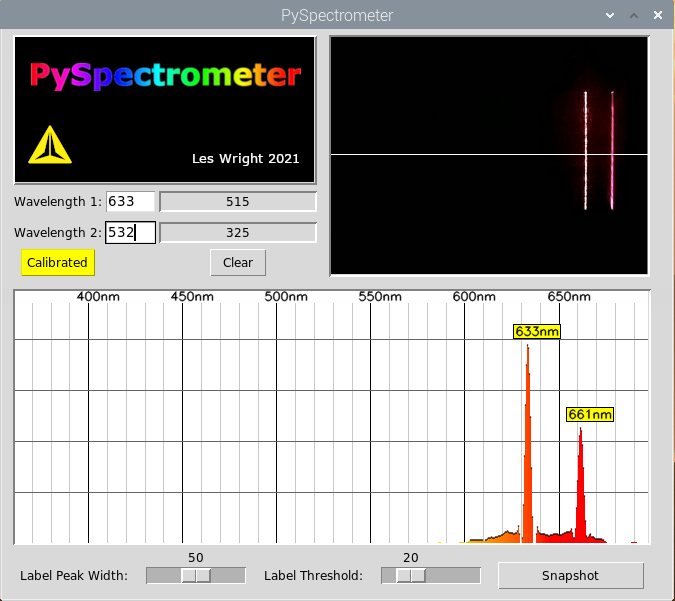 Measuring the wavelength of a cheap violet Laser pointer, note the strong fluorescence from the paper! Paper is optically brightened with a fluorescent dyes, most likely Coumarin. 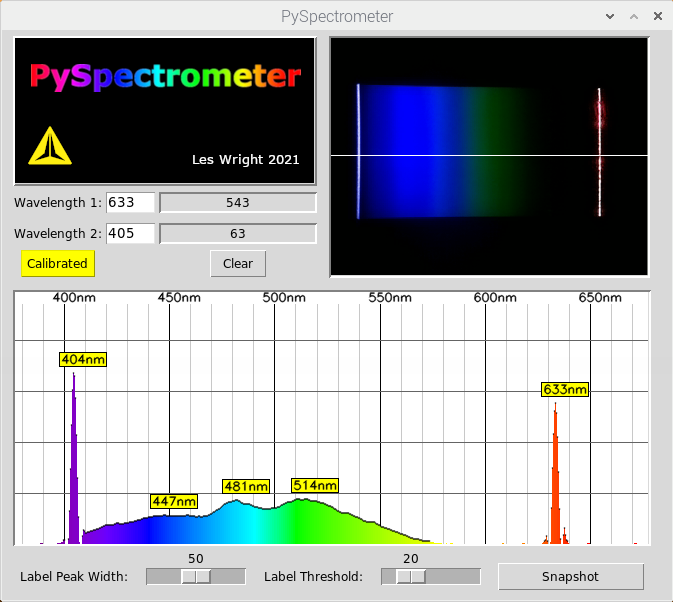 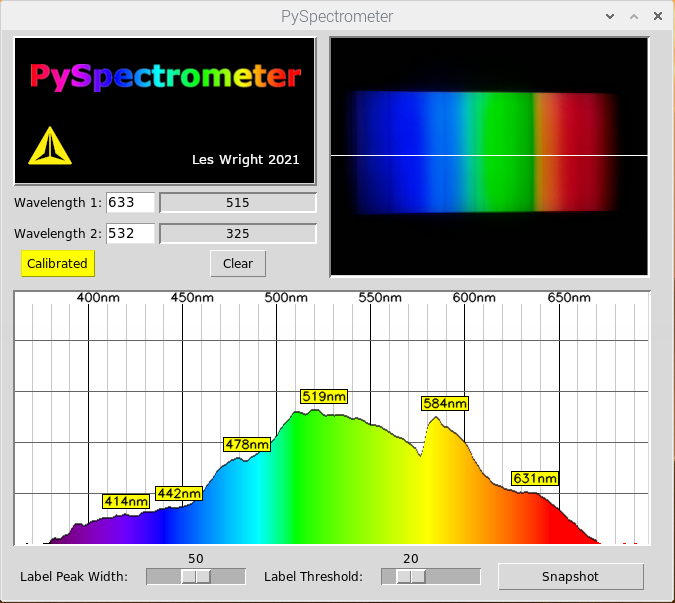 The spectrum of of a Helium-Neon Discharge. 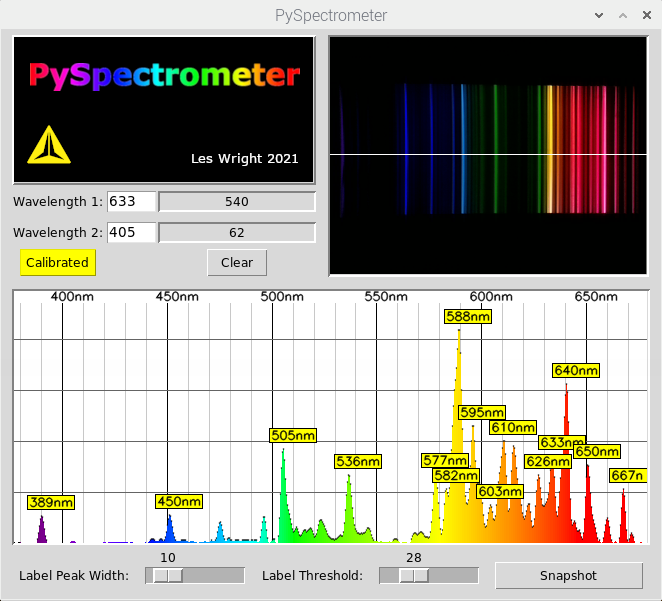 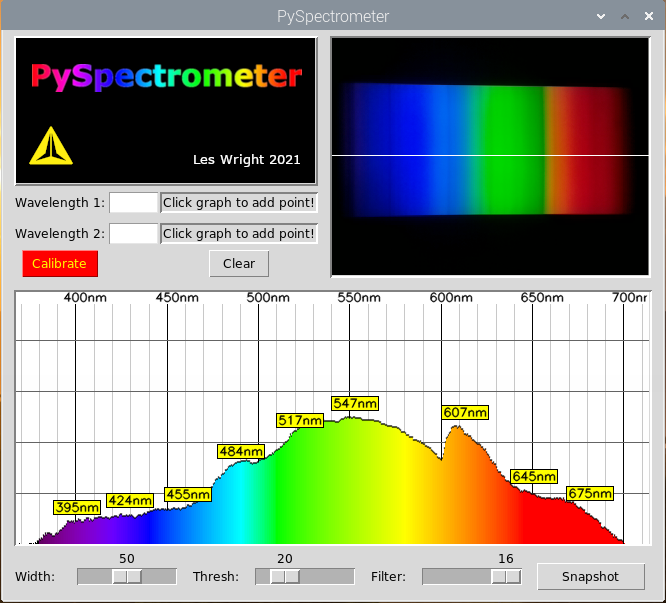 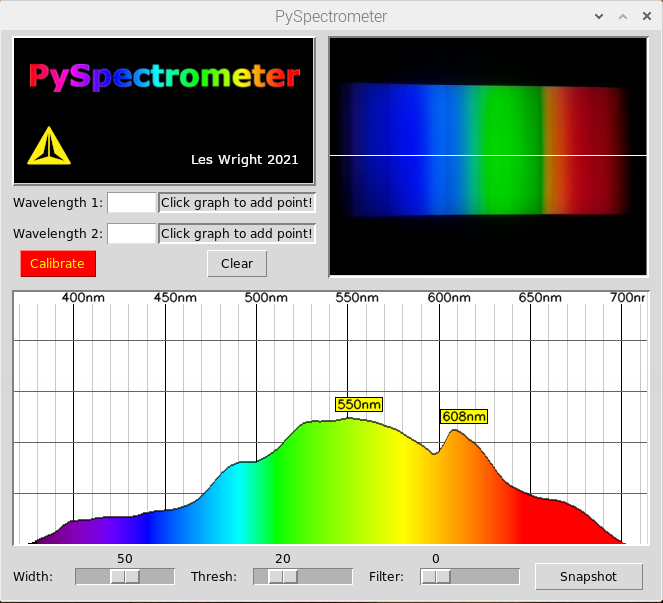 Version 3 has a Peak hold feature to detect transient events, such as a Laser pulse, or a Camera Flash! 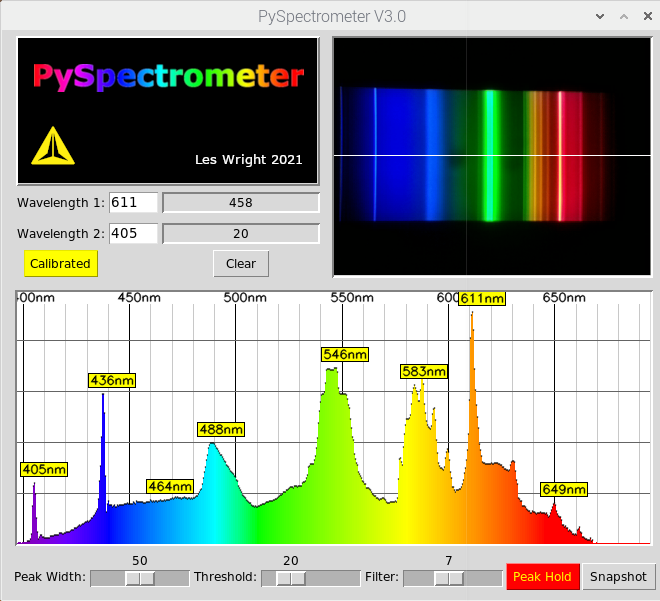 Pressing the snapshot button also dumps data to a CSV file. This is far more accurate data than the graph window, and can be imported into OpenOffice on the Pi. 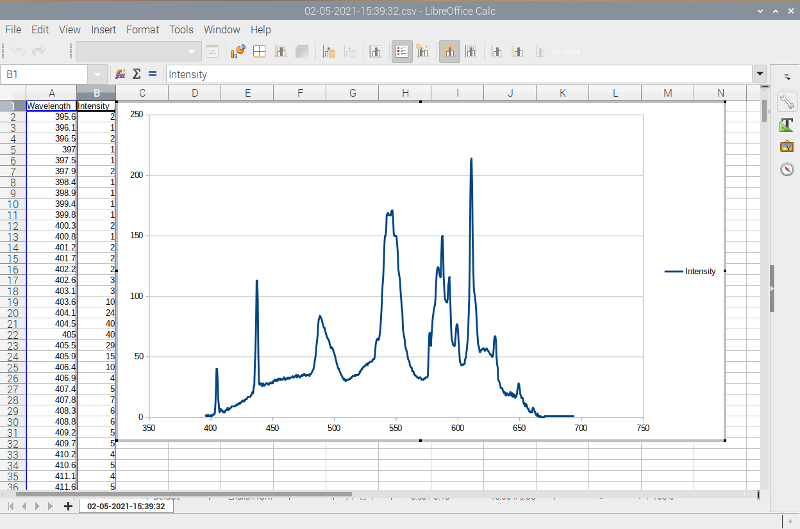 Note: Filenames have colons in them. Unix like OS's e.g. Linux have no issue, but you will find that you have to rename these if you want to import to Windows! 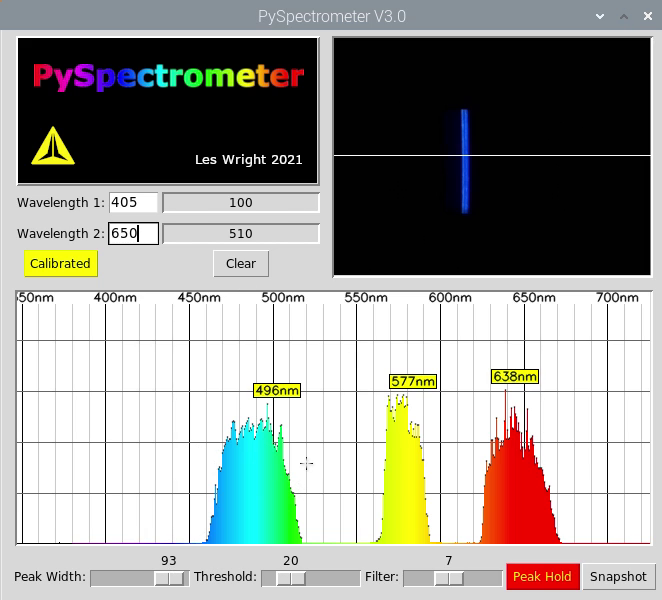