This section covers some of the important design features of the Automation Kit framework.

One of the key philosophies behind the Automation Kit design is one of being able quickly and efficiently identify the nature of issues that come up during automation runs. The Automation Kit initially classifies errors into one of four categories:

Having the initial classification of issues fall into one of these four categories helps to ensure that issues are easier to triage and assign to the appropriate party for investigation and resolution.

The Automation Kit comes with enterprise level integration and distributed automation capabilities. The framework utilizes a customize-able set of classes that guides enterprise users through a process of creating a very robust integration object model based on the roles that enterprise resources play in an automation landscape.

The declaration of a custom automation landscape is as simple as setting an environment variable or passing a command line flag declaring the python module that contains a custom landscape derived class. The Landscape and LandscapeDescription derived classes work together to provide the Automation Kit with a description of the customized roles and integration mixin(s) that provide the connection between the tasks and test automation code. 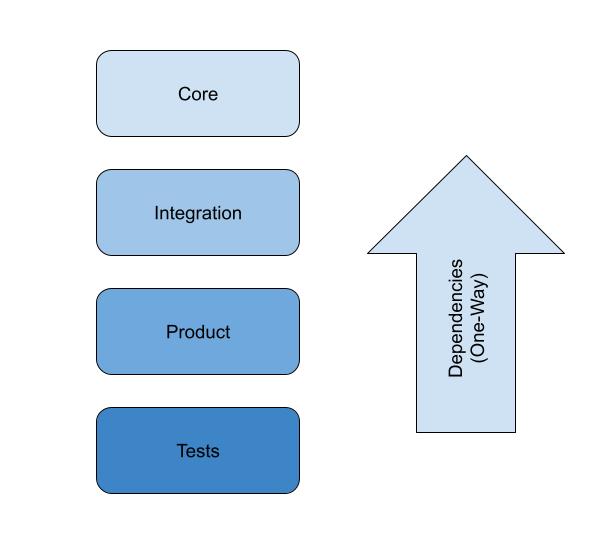 The four layer software stack that is shown in the diagram helps to break down the test automation stack into major groups which serves to establish good patterns and practices for maintaining the software stack. The patterns span different disciplines of the software development process.

The Automation Kit servers as the core layer in the above software stack. It provides the foundation components on which to build a distributed automation software stack and provides extensibility to make it easy to adapt the core layer to different automation scenarios and to build an integration layer on top of. This makes it easier to use the Automation Kit as the foundation for any distributed automation project and itegrate it into an enterprise continuous integration system.

The software stack divides the source code up by product alignment. This seperation of product alignment means that source code can more easily be partitioned for deployment in the enterprise. The core and intergation components of the software stack that are not closely aligned with the product under test, can be stored in repositories and deployed based on repository style deployment techniques. 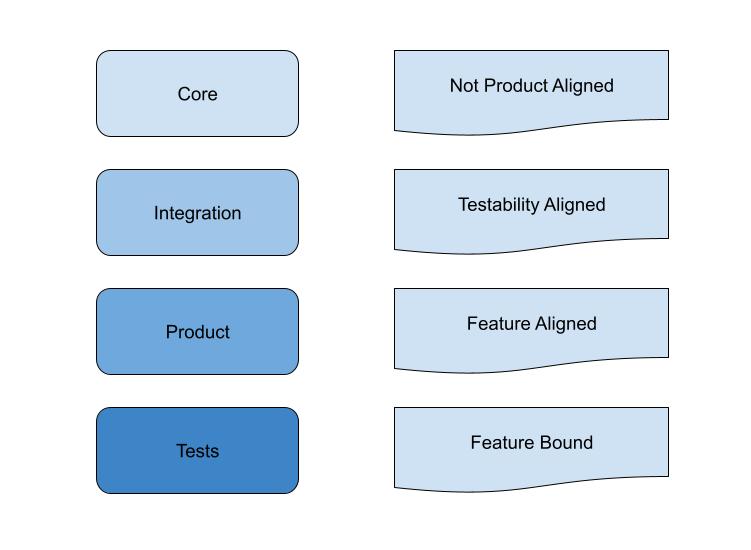 From the diagram you can see that the mid-tier and test code are the most closely aligned to the the product code and can be kept in the source tree with the product code. This means that changes to features and assocatied tests can be versioned in the branch along with the feature code.

The software stack also divides up the code by Risk and Impact. Because the core and integration code is a central dependency for the mid-tier and test code. They have a higher risk when it comes to code changes. They also are shared and so have higher impact. 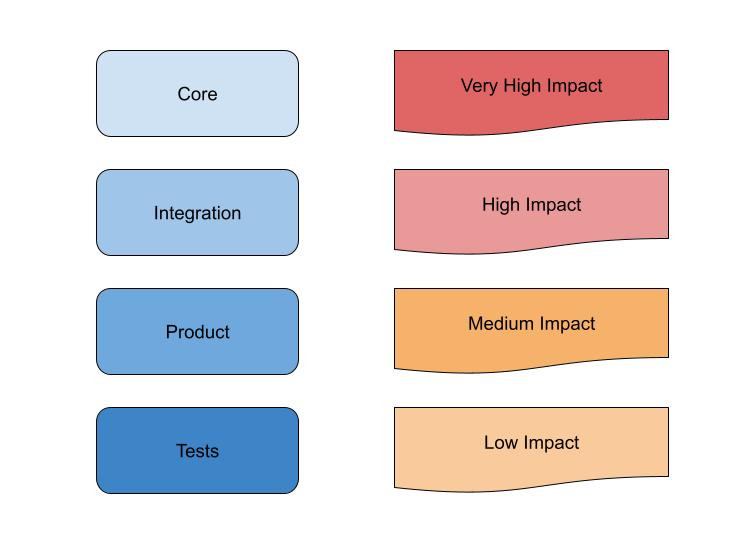 The fact that we seperate out the higher impact code into different layers, means that we can establish different patterns and practices that are followed with working with the code at the given layers in the stack. This is important as it allows us to make changes to lower impact product code easier for testers but still maintaining quality in the high impact code. We can also put special layer appropriate testing proceedures in place for the code at the core and intergation layers. 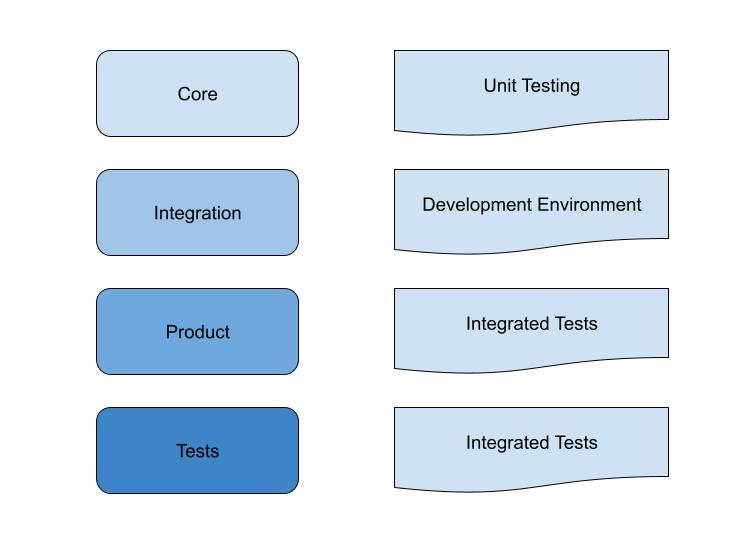 The diagram above shows how we can establish appropriate testing patterns and practices for the code being merged into each level of the software stack.

The AutomationKit defines an object model that helps to create a test landscape where automation activies can be conducted and coordinated. The pre-defined object model helps to eliminate a lot of experimental or trial and error activities when standing up new automation products, by defining patterns that have been previously utilized to successfully create large scale automation projects. 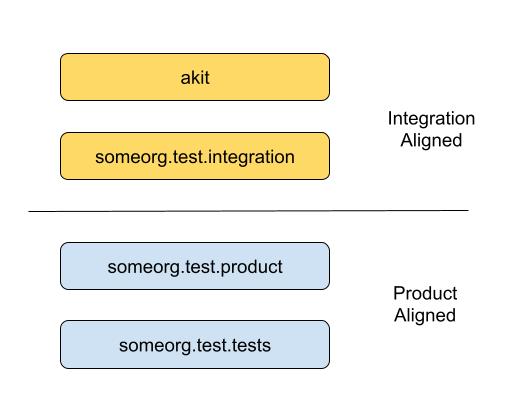 The layout of the software stack shown above is critically important for creating a robust at scale. It is partitioned in such a way as to hit a sweet spot between the needs of the Continuous Integration team and the Individual Test Contributors on many levels. If you want to understand the importance of the partitioning shown you can read an in depth explanation on the

The sections below describe the integration model that is utilized by the AutomationKit in order to quickly stand up robust automation projects.

The Landscape object utilizes Coordinator objects to manage external automation resources such as devices, serial connections, and power connections. The coordinators are loaded based on whether or not a test or other framework consumer includes a coordinator or device integration fixture which indicates that resources are required for automation. Once the test framework finds an integration fixture, it commences the process of querying the fixture for information about the test resources that will be required or utilized by the test run and provides the fixtures with an opportunity to integrate any required resources. 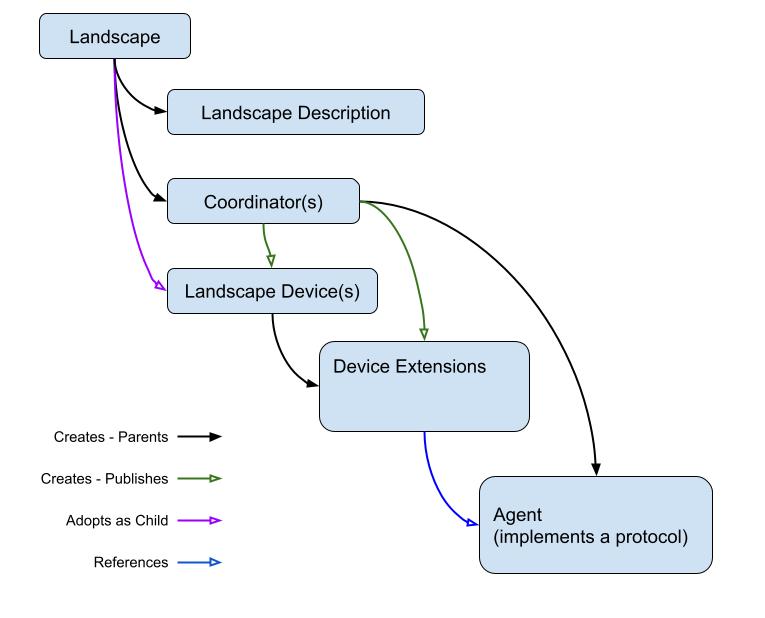