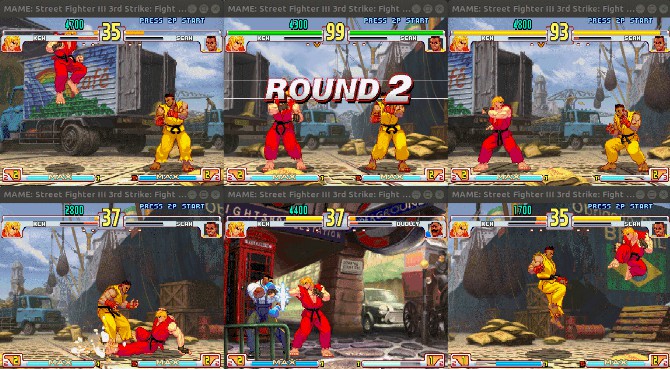 This Python library has the to potential to train your reinforcement learning algorithm on almost any arcade game. It is currently available on Linux systems and works as a wrapper around MAME. The toolkit allows your algorithm to step through gameplay while recieving the frame data and internal memory address values for tracking the games state, along with sending actions to interact with the game.

You can use pip to install the library, just run:

DISCLAIMER: We are unable to provide you with any game ROMs. It is the users own legal responsibility to acquire a game ROM for emulation. This library should only be used for non-commercial research purposes.

There are some free ROMs available at: [https://www.mamedev.org/roms/]

The toolkit has currently been applied to Street Fighter III Third Strike: Fight for the Future (Japan 990608, NO CD), but can modified for any game available on MAME. The following demonstrates how a random agent can be written for a street fighter environment.

Setting Up Your Own Game Environment

To create an emulation of the game you must first have the ROM for the game you are emulating and know the game ID used by MAME, for example for this version of street fighter it is 'sfiii3n'.
The id of your game can be found by running:

This will bring up the MAME emulator. You can search through the list of games to find the one you want. The id of the game is always in brackets at the end of the game title.

It doesn't take much to interact with the emulator itself using the toolkit, however the challenge comes from finding the memory address values associated with the internal state you care about, and tracking said state with your environment class.
The internal memory states of a game can be tracked using the MAME Cheat Debugger, which allows you to track how the memory address values of the game change over time.

The cheat debugger can be run using the following:

For information about using the debugger, see the Memory dump section of this tutorial [https://www.dorkbotpdx.org/blog/skinny/use_mames_debugger_to_reverse_engineer_and_extend_old_games]

Once you have determined the memory addresses you wish to track you can start the emulation using:

This will immediately start the emulation and halt it when the toolkit has linked to the emulator process.

Once the toolkit is linked, you can step the emulator along using the step function:

The step function returns the frame data as a NumPy matrix, along with all of the memory address integer values from that timestep.

Sending inputs
To send actions to the emulator you also need to determine which input ports and fields the game supports. For example, with street fighter to insert a coin the following code is required:

To identify which ports are availble use the list actions command:

which for street fighter returns the list with all the ports and fields available for sending actions to the step function:

We advise you to create an enum of all the possible actions, then send their action values to the emulator, see the example Actions Enum

There is also the problem of transitioning games between non-learnable gameplay screens such as the title screen and character select. To see how this can be implemented please look at the provided Steps script and the Example Street Fighter III Third Strike: Fight for the Future Environment Implementation

The emulator class also has a frame_ratio argument which can be used for adjusting the frame rate seen by your algorithm. By default MAME generates frames at 60 frames per second, however, this may be too many frames for your algorithm. The toolkit by default will use a frame_ratio of 3, which means that 1 in 3 frames are sent through the toolkit, this converts the frame rate to 20 frames per second. Using a higher frame_ratio also increases the performance of the toolkit.

To ensure that the toolkit is able to train algorithms, a simple 5 layer ConvNet was setup with minimal tuning. The algorithm was able to successfully learn some simple mechanics of Street Fighter, such as combos and blocking. The Street Fighter gameplay works by having the player fight different opponents across 10 stages of increasing difficulty. Initially, the algorithm would reach stage 2 on average, but eventually could reach stage 5 on average after 2200 episodes of training. The learning rate was tracked using the net damage done vs damage taken of a single playthough for each episode. 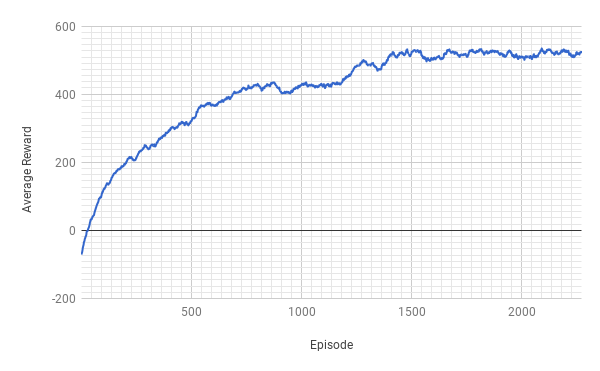 The library works by acting as a wrapper around a modified MAME implementation.
The following changes were made:

The following files are affected:

The modified MAME implementation can be found at [https://github.com/M-J-Murray/mame]

It is highly recommended to read the report to get a light introduction to Game Boy emulation. The report is relevant, eventhough you want to contribute to another emulator, or create your own.

Tested on Kali Linux. Should work with all Debian based distros (and other ones if you have the right packages installed)