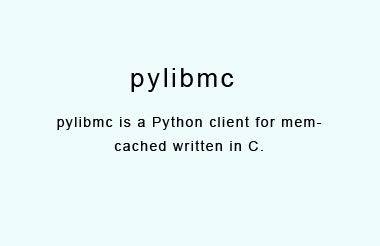 pylibmc is a Python client for memcached written in C.

This release fixes critical memory leaks in common code paths introduced in
1.4.2. Also fixes a critical bug in a corner of the zlib inflation code, where
prior memory errors would trigger a double free. Thank you to everybody
involved in the making of this release, and especially Eau de Web__, without
their contributions, this release and the bug fixes it contains wouldn't have
been so expedient.

Thanks to everybody involved in this project; this release involves less
authors but a lot more work per person. Thanks especially to Harvey Falcic
for the work he put in, without which there wouldn't be any Python 3.x support.
Also thanks to Sergey Pashinin for the initial stab at the problem.

Other than that, we had miscellaneous bug fixes, testing improvements, and
documentation updates.

Last but not least I would like to ask for your support in this project, either
by helping out with development, testing, documentation or anything at all; or
simply by donating some magic internet money__ to the project's Bitcoin
address 12dveKhqiJWCY8zXT4kaHdHELXPeGAUo9h__.

Beaker is a web session and general caching library that includes WSGI middleware for use in web applications.

Cache Machine provides automatic caching and invalidation for Django models through the ORM.

Johnny Cache is a caching framework for django applications.

Raven is the official Python client for Sentry, officially supports Python 2.6–2.7 & 3.3–3.7, and runs on PyPy and Google App Engine.