Uproot is a reader and a writer of the ROOT file format using only Python and Numpy. Unlike the standard C++ ROOT implementation, Uproot is only an I/O library, primarily intended to stream data into machine learning libraries in Python. Unlike PyROOT and root_numpy, Uproot does not depend on C++ ROOT. Instead, it uses Numpy to cast blocks of data from the ROOT file as Numpy arrays. 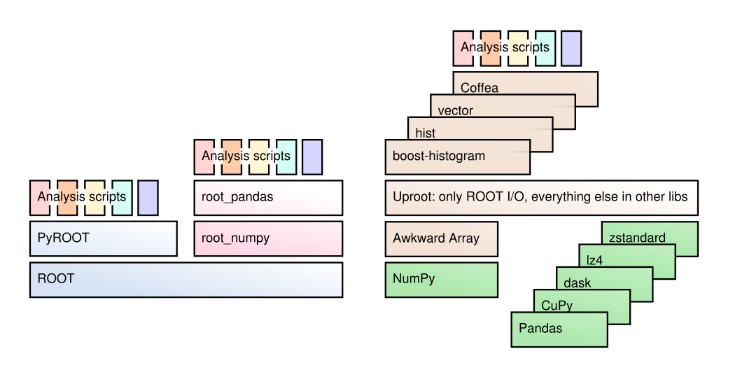 Uproot can be installed from PyPI using pip (Awkward Array is optional but highly recommended):

If you have already added conda-forge as a channel, the -c conda-forge is unnecessary. Adding the channel is recommended because it ensures that all of your packages use compatible versions:

Note: if you need to write ROOT files, you'll need to use the deprecated uproot3 for now. This feature is coming to the new version soon.

Start with the tutorials and reference documentation.

Uproot is an ordinary Python library; you can get a copy of the code with

and install it locally by calling pip install . in the repository directory.

If you need to develop Awkward Array as well, see its installation for developers.

Uproot's only strict dependency is NumPy. This is the only dependency that pip will automatically install.

Awkward Array is highly recommended. It is not a strict dependency to allow Uproot to be used in restrictive environments. If you're using Uproot without Awkward Array, you'll have to use the library="np" option or globally set uproot.default_library to return arrays as NumPy arrays (see documentation).

The following libraries are also useful in conjunction with Uproot, but are not necessary. If you call a function that needs one, you'll be prompted to install it. (Conda installs most of these automatically.)

For exporting data to other libraries: