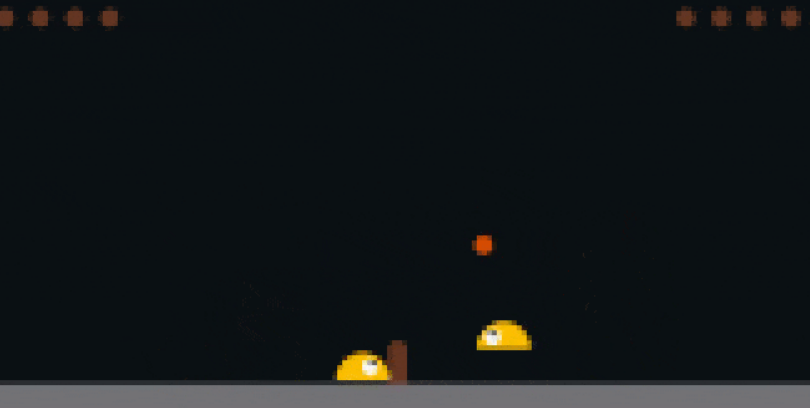 Slime Volleyball is a game created in the early 2000s by an unknown author.

“The physics of the game are a little ‘dodgy,’ but its simple gameplay made it instantly addictive.”

The game is very simple: the agent's goal is to get the ball to land on the ground of its opponent's side, causing its opponent to lose a life. Each agent starts off with five lives. The episode ends when either agent loses all five lives, or after 3000 timesteps has passed. An agent receives a reward of +1 when its opponent loses or -1 when it loses a life.

This environment is based on Neural Slime Volleyball, a JavaScript game I created in 2015 that used self-play and evolution to train a simple neural network agent to play the game better than most human players. I decided to port it over to Python as a lightweight and fast gym environment as a testbed for more advanced RL methods such as multi-agent, self-play, continual learning, and imitation learning algorithms.

This environment is meant to complement existing simple benchmark tasks, such as CartPole, Lunar Lander, Bipedal Walker, Car Racing, and continuous control tasks (MuJoCo / PyBullet / DM Control), but with an extra game-playing element. The motivation is to easily enable trained agents to play against each other, and also let us easily train agents directly in a multi-agent setting, thus adding an extra dimension for evaluating an agent's performance.

Install from pip package, if you only want to use the gym environment, but don't want the example usage scripts:

After installing from the repo, you can play the game against the baseline agent by running:

There are two types of environments: state-space observation or pixel observations:

SlimeVolleyNoFrameskip-v0 identical to SlimeVolleyPixel-v0 except that the action space is now a one-hot vector typically used in Atari RL agents.

In state-space observation, the 12-dim vector corresponds to the following states:

The origin point (0, 0) is located at the bottom of the fence.

Both state and pixel observations are presented assuming the agent is playing on the right side of the screen.

It is straight forward to modify the gym loop to enable multi-agent or self-play. Here is a basic gym loop:

The info object contains extra information including the observation for the opponent:

Note that in both state and pixel modes, otherObs is given as if the agent is playing on the right side of the screen, so one can swap an agent to play either side without modifying the agent.

Opponent's observation is rendered in the smaller window.

One can consider replacing policy2 with earlier versions of your agent (self-play) and wrapping the multi-agent environment as if it were a single-agent environment so that it can use standard RL algorithms. There are several examples of these techniques described in more detail in the TRAINING.md tutorial.

Evaluating against other agents

You can run them against each other using the following command:

It should be relatively straightforward to modify eval_agents.py to include your custom agent.

Below are scores achieved by various algorithms and links to their implementations. Feel free to add yours here:

For sample efficiency, we can measure how many timesteps it took to train an agent that can achieve a positive average score (over 1000 episodes) against the built-in baseline policy:

Table of average scores achieved versus agents other than the default baseline policy (1000 episodes):

Results for pixel observation version of the environment (SlimeVolleyPixel-v0 or SlimeVolleyNoFrameskip-v0):

If you have publications, articles, projects, blog posts that use this environment, feel free to add a link here via a PR.

Please use this BibTeX to cite this repository in your publications:

The DOS game from the 80s re-written in Python from Scratch!

The goal of palmerpenguins is to provide a great dataset for data exploration & visualization, as an alternative to iris.

Libra automates the end-to-end machine learning process in just one line of code.