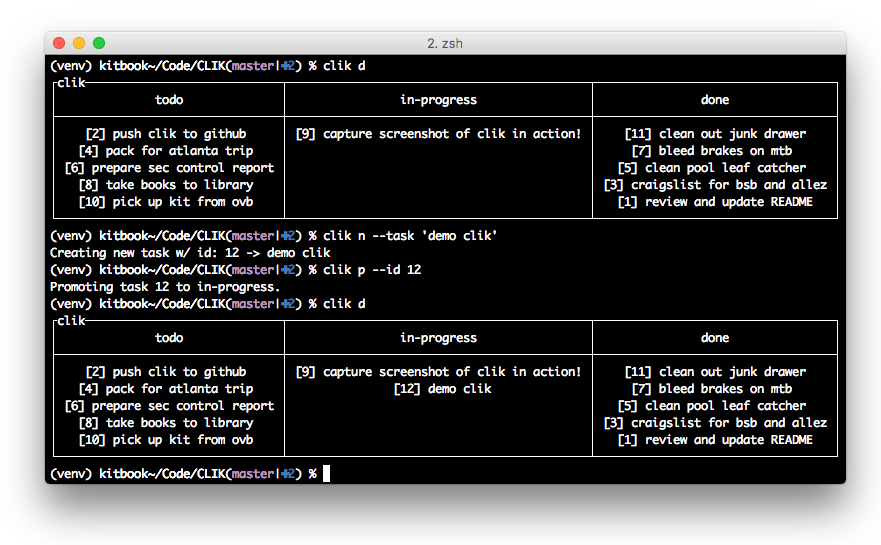 There has been a little chatter about 'personal' kanban on the tubes lately. I don't know about the need to hype it as personal, but if you're looking to get your head wrapped around stuff needing to get done - then kanban is a healthy tool. clikan is a super simple command-line utility for tracking tasks following the Japanese Kanban (boarding) style. clikan's core intent is to be easy to use, and to maintain simplicity.

This is where the tool will store the history of files. It's configurable so you can put the data in a Dropbox or other cloud-watched directory for safe archiving/backing up.

If you're like me, even clikan is a bunch too many characters to type, so shorten with an alias in my shell config to clik.

The basic usage of clikan breaks down into three basic commands:

And there are more supporting commands:

It's Python code. Fork, fix, and submit a PR - it'd be super appreciated.

Webwrap is a simple script that will use your web shell to simulate a terminal, and makes you gain speed.

Rich is a Python library for rich text and beautiful formatting in the terminal.

TermUI is a simple (for now) window manager to be used in a terminal.

A DevOps Tools Path to Production for DevOps Learning and Design. Design with Web Component can use it any page.