Ivy is a templated deep learning framework which maximizes the portability of deep learning codebases. Ivy wraps the functional APIs of existing frameworks. Framework-agnostic functions, libraries and layers can then be written using Ivy, with simultaneous support for all frameworks. Ivy currently supports Jax, TensorFlow, PyTorch, MXNet and Numpy. Check out the docs for more info!

There are a host of derived libraries written in Ivy, in the areas of mechanics, 3D vision, robotics, differentiable memory, and differentiable gym environments. Click on the icons below for their respective github pages.

Ivy can be installed like so: pip install ivy-core You can immediately use Ivy to train a neural network, using your favourite framework in the background, like so:

This example uses PyTorch as a backend framework, but the backend can easily be changed to your favourite framework, such as TensorFlow, JAX or MXNet.

In the example below we show how Ivy's concatenation function is compatible with tensors from different frameworks. This is the same for ALL Ivy functions. They can accept tensors from any framework and return the correct result.

To see a list of all Ivy methods, type ivy. into a python command prompt and press tab. You should then see output like the following: 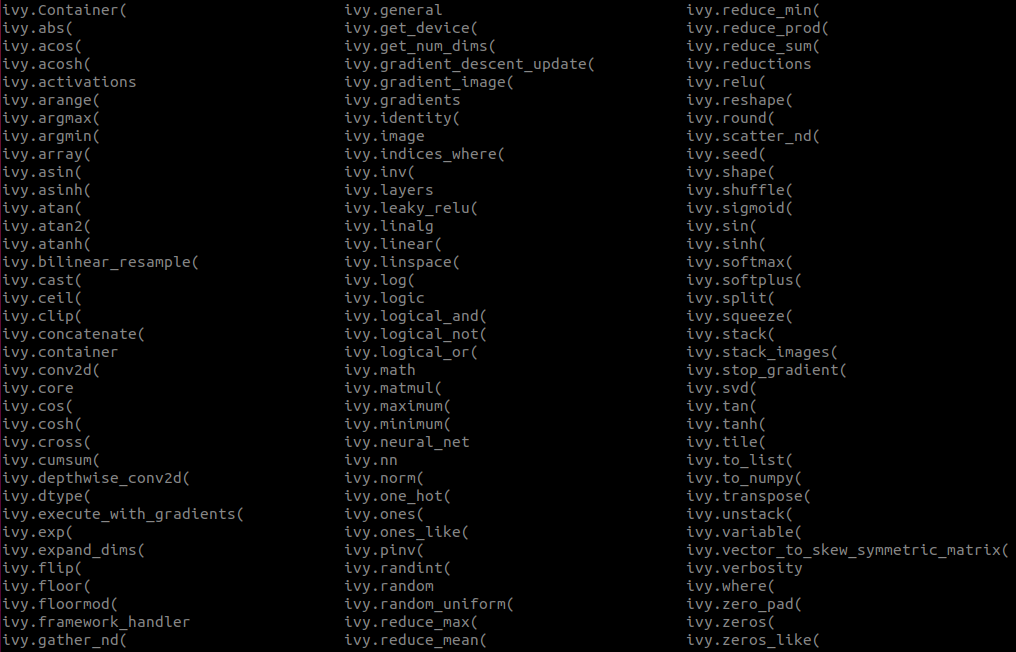 Based on this short code sample alone, you may wonder, why is this helpful? Don't most developers stick to just one framework for a project? This is indeed the case, and the benefit of Ivy is not the ability to combine different frameworks in a single project.

So what is the benefit of Ivy?

Ivy's strength arises when we want to maximize the usability of our code.

We can write a set of functions once in Ivy, and share these with the community so that all developers can use them, irrespective of their personal choice of framework. TensorFlow? PyTorch? Jax? With Ivy code it doesn't matter!

This makes it very simple to create highly portable deep learning codebases. The core idea behind Ivy is captured by the example of the ivy.clip function below.

For example, the Ivy libraries for mechanics, 3D vision, robotics, and differentiable environments are all written in pure Ivy. These libraries provide fully differentiable implementations of various applied functions, primed for integration in end-to-end networks, for users of any deep-learning framework.

Another benefit of Ivy is user flexibility. By keeping the Ivy abstraction lightweight and fully functional, this keeps you in full control of your code. The schematic below emphasizes that you can choose to develop at any abstraction level.

You can code entirely in Ivy, or mainly in their native DL framework, with a small amount of Ivy code. This is entirely up to you, depending on how many Ivy functions you need from existing Ivy libraries, and how much new Ivy code you add into your own project, to maximize it's audience when sharing online.

So, now that you've got the gist of Ivy, and why it's useful. Where to next?

If you would like to use the existing set of Ivy libraries, dragging and dropping key functions into your own project, then we suggest you dive into some of the demos for the various Ivy libraries currently on offer. Simply open up the main docs, then open the library-specific docs linked on the bottom left, and check out the demos folder in the library repo.

On the other hand, if you have your own new library in mind, or if you would like to implement parts of your own project in Ivy to maximise its portability, then we recommend checking out the page Using Ivy in the docs. Here, we dive a bit deeper into the Ivy framework, and the best coding practices to get the most out of Ivy for your own codebases and libraries.