fds is a tool for Data Scientists made by DAGsHub to version control data and code at once.

At a high level, fds is a command line wrapper around Git and DVC, meant to minimize the chances of human error, automate repetitive tasks, and provide a smoother landing for new users.

See the launch blog for more information about the motivation behind this project.

fds status lets us quickly check the full status of the repo - both DVC and git at the same time, to make sure we don't forget anything.

Here, we can see that we have a small, normal text file - .gitignore, plus a bigfile.txt and data folder which we would want to add to DVC and not to git. fds add makes that easy!

You're probably used to the convenience of using git add . to just track everything. Unfortunately, you have to be careful doing this when working with large files - one wrong move, and you might fry your hard drive by accidentally telling git to track a huge dataset!
We wanted to retain the convenience of just typing one command which means "just track all changes, I'll do a git commit in one second", which will be smart enough to avoid the pitfalls of large data files.
fds add does exactly that, while interactively asking the user how to handle files. You can add to DVC, or git, recursively step into large folders, skip or ignore files, etc.

Here's the file tree of the repo I used above, with file sizes included. Note how bigfile.txt and data/ were automatically added to DVC and not git:

Finally, to close the loop of a real workflow, what happens when I change existing DVC tracked files? Without FDS, you'd have to remember to separately run dvc repro or dvc commit, then git add tracked_file.dvc, and only then git commit.
fds commit does all that for you - commits changes to DVC first, then adds the .dvc files with the updated hashes to git, then immediately commits these changes (plus any other staged changes) to a new git commit. Voila! 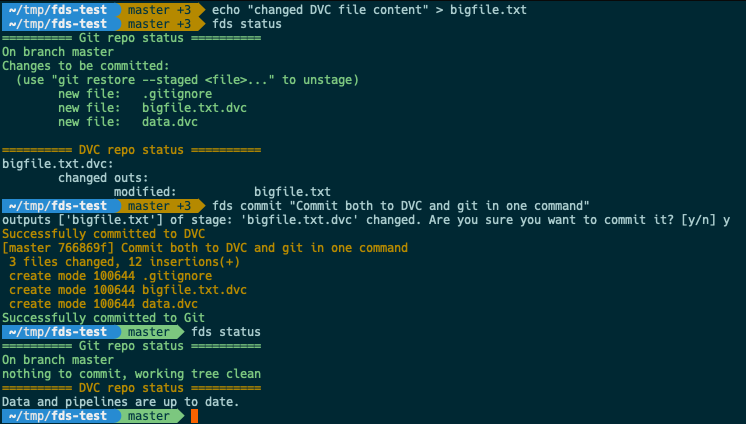 It's a simple python package to play videos in a terminal using ASCII characters.
21 June 2021
termplotlibtermplotlib is a Python library for all your terminal plotting needs. It aims to work like matplotlib. Line plotsFor line plots, termplotlib relies on gnuplot. With that installed, the code import termplotlib as
23 September 2021
Selene is a Python library and command line interface for training deep neural networks from biological sequence data such as genomes
13 September 2021