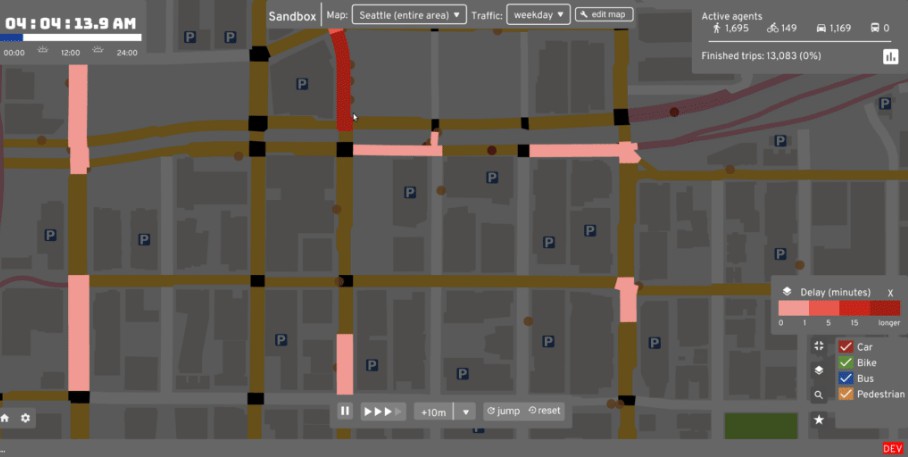 Ever been on a bus stuck in traffic, wondering why there are cars parked on the road instead of a bus lane? A/B Street is a game exploring how small changes to a city affect the movement of drivers, cyclists, transit users, and pedestrians.

See the roadmap for current work, including ways to help. If
you want to bring this to your city or if you're skilled in design, traffic
simulation, data visualization, or civic/government outreach, please contact
Dustin Carlino at [email protected]. Follow
r/abstreet for weekly updates or
@CarlinoDustin for occasional videos of
recent progress.

If you fix some traffic problem while playing A/B Street, my ultimate goal is
for your changes to become a real proposal for adjusting Seattle's
infrastructure. A/B Street is of course a game, using a simplified approach to
traffic modeling, so city governments still have to evaluate proposals using
their existing methods. A/B Street is intended as a conversation starter and
tool to communicate ideas with interactive visualizations.

Why not leave city planning to professionals? People are local experts on the
small slice of the city they interact with daily -- the one left turn lane that
always backs up or a certain set of poorly timed walk signals.
Laura Adler
writes:

"Only with simple, accessible simulation programs can citizens become active
generators of their own urban visions, not just passive recipients of options
laid out by government officials."

Existing urban planning software is either proprietary or hard to use. A/B
Street strives to set the accessibility bar high, by being a fun, engaging game.
See here for more guiding principles.

The DOS game from the 80s re-written in Python from Scratch!