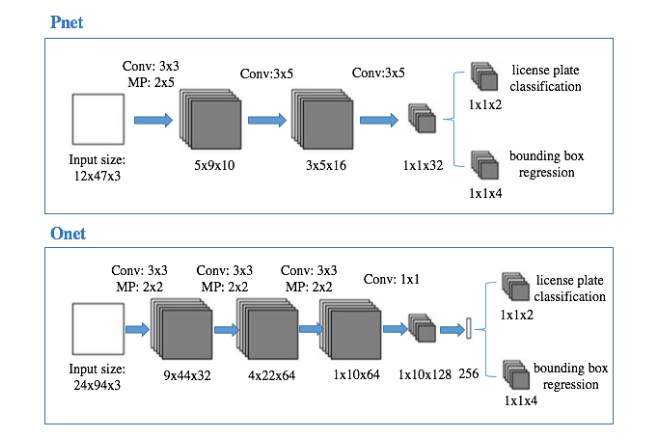 This is a two stage lightweight and robust license plate recognition in MTCNN and LPRNet using Pytorch. MTCNN is a very well-known real-time detection model primarily designed for human face recognition. It is modified for license plate detection. LPRNet, another real-time end-to-end DNN, is utilized for the subsquent recognition. This network is attributed by its superior performance with low computational cost without preliminary character segmentation. The Spatial Transformer Layer is embeded in this work to allow a better characteristics for recognition. The recognition accuracy is up to 99% on CCPD base dataset with ~ 80 ms/image on Nivida Quadro P4000. Here is the illustration of the proposed pipeline:

The modified MTCNN structure is presented as below. Only proposal net (Pnet) and output net (Onet) are used in this work since it is found that skipping Rnet will not hurt the accuracy in this case. The Onet accepts 24(height) x 94(width) BGR image which is consistent with input for LPRNet. 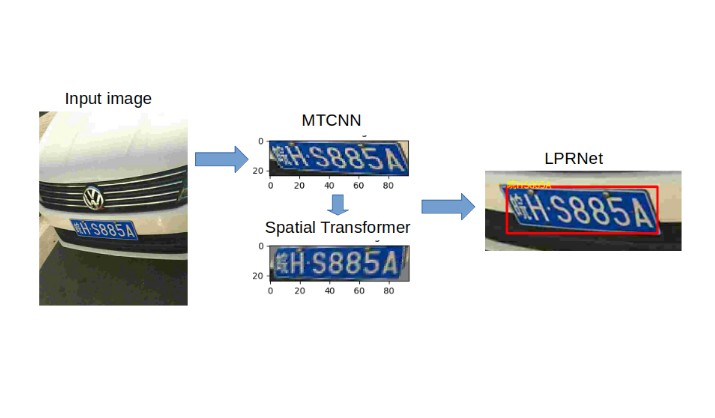 LPRNet coding is heavily followed by sirius-ai's repo. One exception is that the spatial transformer layer is inserted to increase the accuracy reported on CCPD database as below:

robo-gym is an open source toolkit for distributed reinforcement learning on real and simulated robots.

A collection of quickstart samples demonstrating the ML Kit APIs on Android and iOS.

The PyTorch Implementation based on YOLOv4 of the paper: Complex-YOLO: Real-time 3D Object Detection on Point Clouds.

This repo contains a sparse learning library which allows you to wrap any PyTorch neural network with a sparse mask to emulate the training of sparse neural networks.

OmniNet is a unified and extended version of the Transformer architecture for multi-modal multi-task learning.