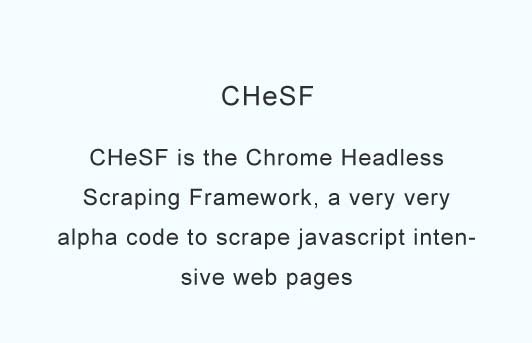 In the era of Big Data, the web is an endless source of information. For this reason, there are plenty of good tools/frameworks to perform scraping of web pages.

So, I guess, in an ideal world there should be no need of a new web scraping framework. Nevertheless, there are always subtle differences between theory and practice. The case of web scraping made no exceptions.

Such considerations were the sparks that gave birth to CHeSF, the Chrome Headless Scraping Framework. To make a long story short, CHeSF relies on both selenium-python and ChromeDriver to perform scraping of webpages also when javascript makes it impossible.

I know that already exists some nice solutions to this problems, but in my point of view CHeSF is simpler: you just create a class that inherits from it, define the parse method and launch it with a start url.

The framework is still very alpha. You should expect that things could change rapidly. Currently, there is no documentation, nor packaging. There is just an example showing how you could use the framework to easily scrape TripAdvisor reviews. Personally, I used it to collect this dataset, i.e. a collection of more than 220k TripAdvisor reviews.

SpiderX allows you to watch movies by scraping data from the internet. This is android/ios client repo built with React native and Expo.

SBOX is a python script to download subtitles for your movies from SubDB database using their API.

Script that crawls meta data from ICLR OpenReview webpage. Tutorials on installing and using Selenium and ChromeDriver on Ubuntu.

Web crawling framework for everyone. Written with asyncio, uvloop and aiohttp.

SoundCloud is a single–page webapp (all content served via JavaScript).