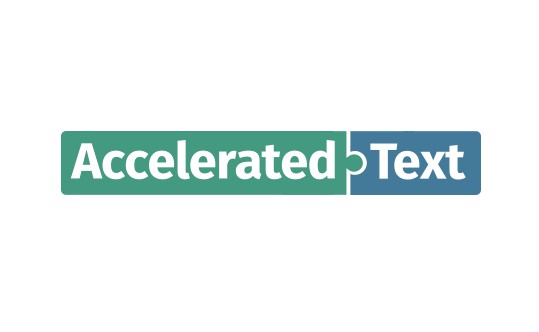 A picture is worth a thousand words. Or is it? Tables, charts, pictures are all useful in undestanding our data but often we need a description; a story to tell us what are we looking at. Accelerated Text is a natural language generation tool which allows you to define data descriptions and then generates multiple versions of those descriptions varying in wording and structure.

Accelerated Text can work with all sorts of data:

With Accelerated Text you can use such data and generate text for your business reports, your e-commerce platform, or your customer support system.

Accelerated Text provides a web based Document Plan builder, where

Document Plans and the connected data are used by Accelerated Text's Natural Language Generation engine
to produce multiple variations of the text exactly expressing what was intended to be communicated to the readers.

Whereof one cannot speak thereof one must be silent

Natural language generation is a broad domain with applications in chat-bots, story generation, and data descriptions to name a few.
Accelerated Text focuses on applying NLG technology to solve your data to text needs.

Data descriptions require precision.
For example, a text describing weather conditions can not invent things beyond what it was provided with: Temperature: -1C, Humidity: 40%, Wind: 10km/h.
The generated text can only state those facts. The expression of an individual fact - temperature - could vary.
It could result in a "it is cold", or "it is just below freezing", or "-1C" but this fact will be stated because it is in the data.
A data to text system is also not the one to elaborate on a story adding something about the serenity of the freezing lake - again, it was not in the supplied data.

Accelerated Text follows the principle of this strict adherence to the data-bound text generation.
Via its user interface it provides instruments to define how the data should be translated into a descriptive text.
This description - a document plan - is executed by natural language generation engine to produce texts that vary in structure and wording but are always and only about the data provided.

If you want to start tinkering and run it based on the latest code in the repository, first make sure that you have make installed

Then clone the project and run

After running this command the front-end will be availabe at the http://localhost:8080

The generation back-end API is at http://localhost:3001

In previous section we created a simple document plan. Here we will use Accelerated Text GraphQL API to fetch the text for the book items. In order to get the generated text, two bits of information need to be passed to the NLG backend: document plan identifier, and data item identifier for which the text will be generated.

If Accelerated Text was started as described in Running section, then GraphQL endpoint is accessible at http://localhost:3001/_graphql endpoint. CURL will be used to illustrate the calls to the back end.

The id field gives document plan id, and the dataSampleId field specifies which data to use.

With this, a second call has to be made to get the results identifier for actual sentence polling. Polling is used because text is not generated right away, NLG process for a more complcated plans can take some time.

A result id is returned:

Whith this a final request can be made to fetch the results. Note that it can be done repeatedly with high performance, since the text generation is not happening at this stage.

You should get generated text with annotations (data is truncated):

Accelerated Text UI helps with creating document plan and testing it with sample data.
Accelerated Text's generation functionality can be used directly from the Clojure code.

Lets say you have a book data limited to the author and the book title:

When working via UI this data needs to be uploaded as the CSV. To use it in the code we'll have to represent as a Clojure map.

Second component needed for generation is the plan itself. In UI it has a nice representation in visual blocks, and is persisted in the structure like this:

With those two in place we can generate the text:

Carrot2 is a programming library for clustering text. It can automatically discover groups of related documents and label them with short key terms or phrases.

This repository is to do car recognition by fine-tuning ResNet-152 with Cars Dataset from Stanford.