ScratchABit is a work in progress, features are added on as needed basis, contributions are welcome.

ScratchABit is released under the terms of GNU General Public License v3 (GPLv3).

To use ScratchABit, you need Python3 installed (tested with Python 3.3 thru 3.7) and VT100 (minimum) or XTerm (recommended) terminal or terminal emulator (any Unix system should be compliant, like Linux/BSD/etc., see FAQ below for more).

If you cloned code without --recursive, run git submodule update --init in the ScratchABit directory.

ScratchABit now ships with Capstone Engine based CPU plugin(s), which allow access to a number of CPU architectures. To use it, recent Python bindings module for Capstone should be installed (in the preference to packages shipped by OS distributions, which are often outdated). The easiest way to install it is into the Python user packages directory:

An alternative is to install it to a Python virtual environment within the ScratchABit directory:

Whenever you open a new terminal session to work with ScratchABit, run source .venv/bin/activate command again to activate the virtual environment.

If nothing of the above works, you can try to install the capstone package system-wide (not recommended):

If you want to disassemble a file in self-describing executable format (like ELF), just pass it as an argument to ScratchABit.py. The repository includes a number of example-*.elf files for various architectures for a quick start. For example, to try x86 32bit version:

Alternatively, if you want to disassemble a raw binary file, you need to create a .def (definition) file, to specify what memory areas are defined for the code, at which address to load binary file, etc. (Note: a .def file may be useful for .elf and similar files too.) The repository includes a simple x86_64 raw binary code, and the corresponding example-x86_64.def file (look inside for description of available options):

Press F9 to access menus (mouse works too in XTerm-compatible terminals). Press F1 to get help about key bindings (most actions are also accessible via menu). The workflow of ScratchABit is similar to other interactive dissamblers (some previous experience or background reading may be helpful).

IDAPython processor plugins can be loaded from anywhere on the Python module path. Alternatively, you can symlink/copy the plugin .py file(s) into the plugins/cpu/ subdirectory.

For a very simple example that uses an external plugin, see this esp8266.def file that works with the xtensa.py plugin from the ida-xtensa2 repository.

Q: What processors/architectures are supported?

A: ScratchABit doesn't support any processor architectures on its own, it is fully retargettable using IDAPython API plugins. Many plugins are available, writing a new plugin is easy. To let users test-drive ScratchABit, a simple x86 processor plugin is included in the distribution, using Pymsasid disassembler under the hood.

From version 2.0, Capstone plugin is also included, allowing access to a number of architectures, including x86, ARM, MIPS, PowerPC, SPARC, etc. (architecture support is enabled gradually based on user testing).

You can read about the plugins shipped together with ScratchABit in the README for plugins/cpu/ dir.

A: ScratchABit is dedicated to static analysis and easy support for new CPU architectures (just code up an new CPU plugin in Python - you can get initial results in few hours). Dynamic analysis wasn't conceived to be a core feature and there're no immediate plans to implement it. Patches are welcome though.

A: There is a related project, called ScratchABlock for deep program analysis, transformation and decompilation. It's expected that as ScratchABlock matures, some of its functionality will be available within ScratchABit (perhaps via plugins).

Q: I'm not on Linux, how can I run ScratchABit?

A: Install Linux in an emulator/VM on your system and rejoice. 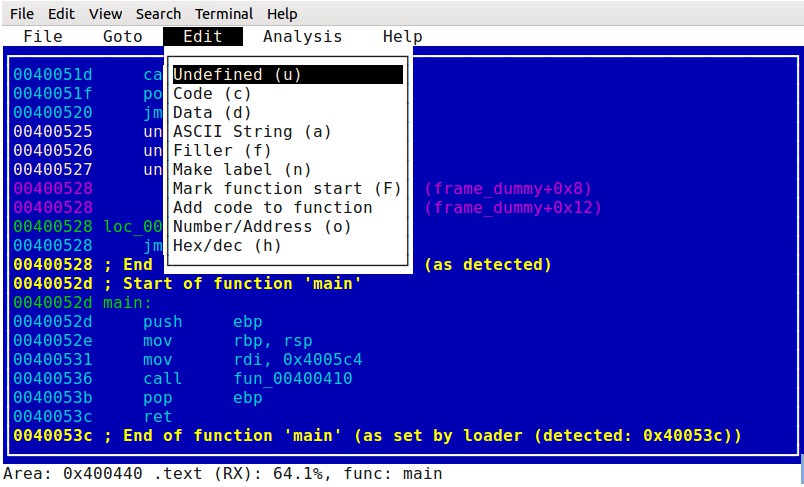