Word Tray is a GUI plugin that automatically looks up efficient outlines for words that start with the current input, much like autocomplete suggestions. It is heavily inspired by StenoTray, which was a widget made before Plover’s plugin system was implemented. 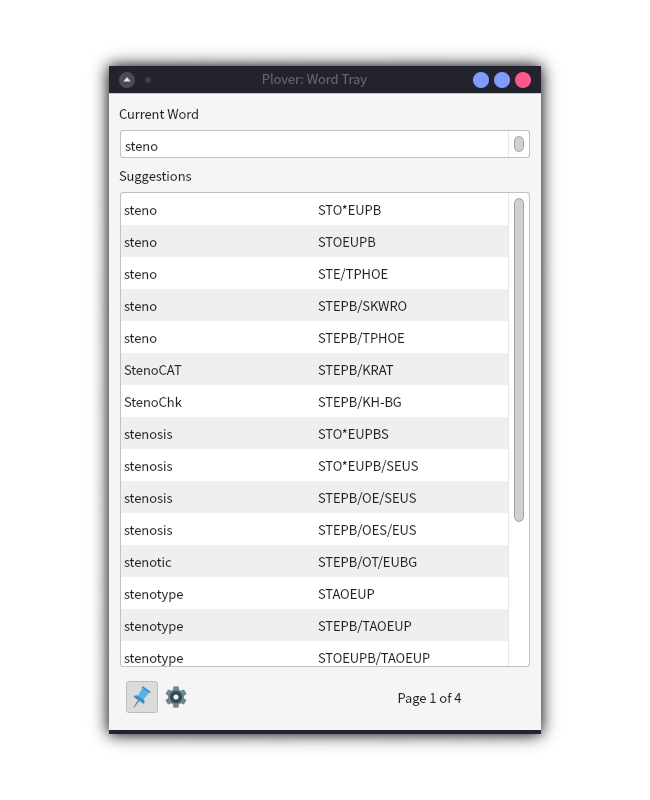 This plugin isn’t on the Plover Plugin Registry yet; install it with the following command:

Alternatively, if you are on Windows, locate the directory where Plover.exe is located in and install using the following command:

In the settings page, you may turn on Display Pseudosteno to show hidden sounds in the list of outlines, such as PLOFR instead of PHROFR.

Tolerance determines the maximum outline length above the minimum length the widget will list. For instance, if the minimum number of strokes required to stroke the word “sample” is 2, setting Tolerance = 3 will display all outlines with 2 to 5 strokes.

To scroll between pages in the widget, you may use the following dictionary definitions. Note that these don’t come with the plugin itself and you’ll have to add them manually! Feel free to use the recommended strokes, or don’t.

The plugin keeps an internal copy of your dictionaries to load suggestions faster. If you edit the dictionaries, this plugin might not respond immediately; you may force it to reload using the Reload Suggestions stroke.

If you’re designing a language system for Plover and you’d like to customize the display order and format, you may do so by including these functions in your system file:

All suggestions will be run through the two formatters (if available) before being sorted. If the user chooses to turn on pseudosteno formatting, the pseudo conversion will happen first before that is passed to the sorter. The sorter will only be used if the user changes their display order to “System Defined”.

The icons used in this plugin are taken from Icons8 Flat Color Icons.

Much of the UI in this plugin is taken from the Plover Next Stroke plugin.