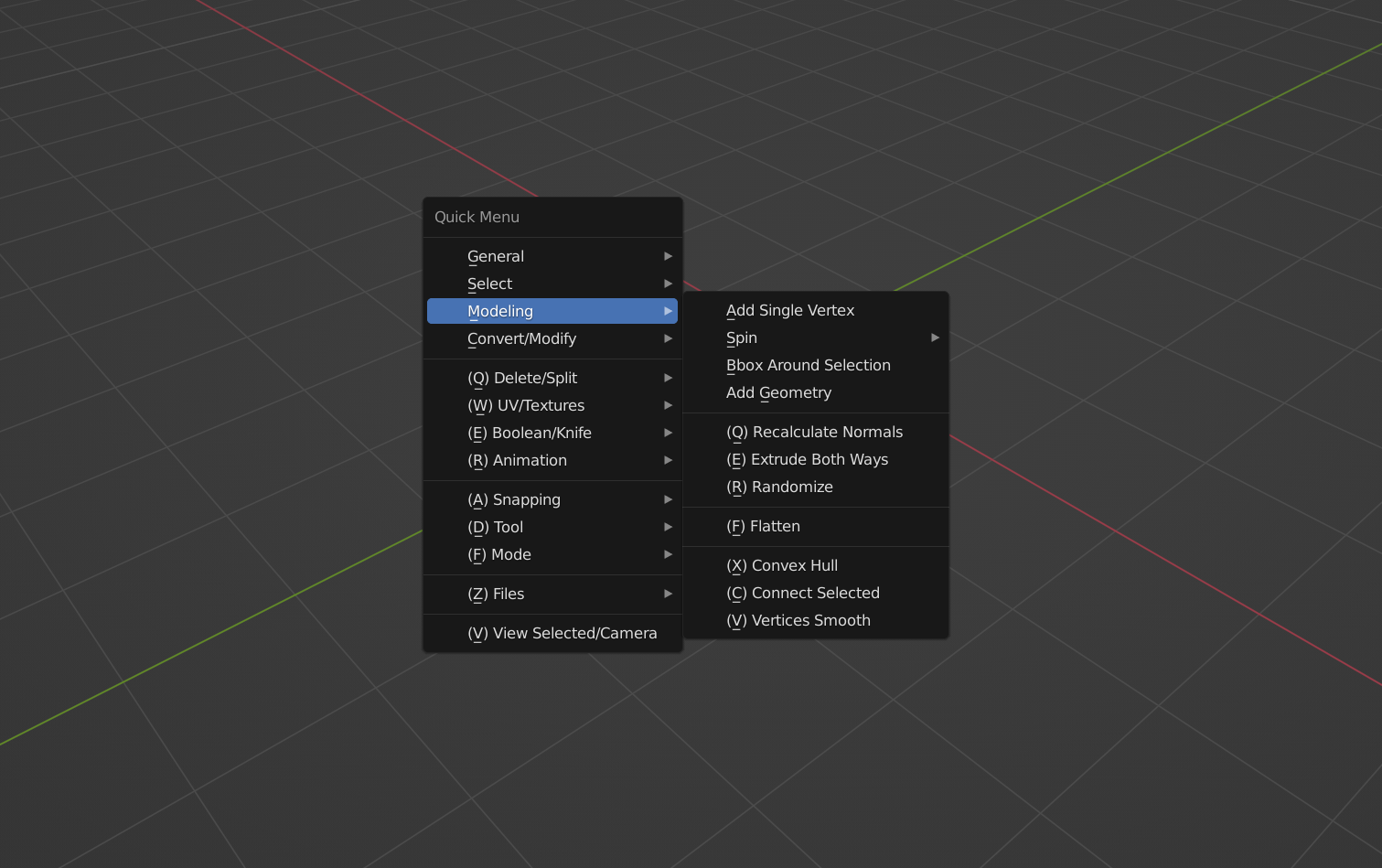 Quick Menu is a Blender addon that simplifies common tasks

Press D to open the menu.

Every operator is described in the manual.

Join our DISCORD for discussion.

The addon was initially made only with personal use in mind and therefore is not customizable. However, it adds some new operators that some people may find useful. It also simplifies access to some operators and settings. Blender is already very hotkey-friendly, but:

This addon is the result of over a year of brainstorming on the effectiveness of modeling/texturing workflow and testing tools on small projects. I’m trying to keep it lightweight. If something seems missing from it, there’s a high chance that the reason for it is that Blender already has built-in tools that allow to do it easily, or the use-case for it is very rare.

This addon is designed to be as unintrusive and minimalistic as possible. All of the operators are in just one menu. There’s no UI other than that, which makes it easy to use. It also only takes one hotkey. It can be changed in the addon’s preferences, but I recommend D.

This addon is a single-file addon for now, and it will probably stay that way because it simplifies development (reloading addons consisting of multiple files is not as straightforward as just pressing Alt+R, Alt+P in Blender’s text editor).

Here are some examples of tools that Quick Menu has. Keep in mind that this is not a complete list of operators, but rather a small showcase of what kind of things the addon is capable of. Only some modeling tools are listed, but the addon also has some operators for UVs, textures, export, etc. Check out the manual for the complete list.

Allows to create tubes out of selected edges with either round or square cross-section. Can be used without leaving edit mode. Usage: d+4+1

Creates a circle or a square aligned to the selected face. Usage: d+3+5. Press shift to make a square

Like some other Quick Menu operators (for example Separate/Join) it unifies multiple existing Blender operators into one. So instead of having to remember two separate hotkeys for Select Loop Inner Region and Select Boundary Loop, you can now just press d+2+3, and the addon will decide what to do depending on what mode you’re in

Creates a bounding box around selected elements in edit mode. Can also create a bounding plane/line, depending on the selection. Usage: d+3+3

Context-dependent boolean, works in both object and edit mode. This operator will pre-scale selection by a small margin before applying boolean to avoid problems with coplanar faces. Works well with Blender’s existing Add Cube tool (dd1). Usage: d+e+1 for union, d+e+2 for difference, d+e+3 for intersection

Connects selected isolated islands with an edge. Will make a face if more than 2 islands are selected. Usage: d+3+c

A faster way to flatten compared to s+{axis}+0+enter. This operator is view-dependent. Usage: d+3+f

Randomize operator that works in both object and edit mode (on separate islands). Usage: d+3+r

A view-dependent operator that cuts an island with a plane that goes through the center of the active element and is oriented towards the viewport camera (Snapped to 90 degrees by default). Convenient for cutting through complex meshes with ngons. Usage: d+e+q

Projects selected elements to unselected. Just like the previous one, this operator is view-dependent. Flattens selection before projecting. Usage: d+e+r

In generative deep geometry learning, we often get many obj files remain to be rendered
17 December 2021
Plots the graph of a function with ASCII characters
08 December 2021
Implementations of Machine Learning models, Regularizers, Optimizers and different Cost functions
10 October 2021