SATNet is a differentiable (smoothed) maximum satisfiability (MAXSAT) solver that can be integrated into the loop of larger deep learning systems. This (approximate) solver is based upon a fast coordinate descent approach to solving the semidefinite program (SDP) associated with the MAXSAT problem.

A SATNet layer takes as input the discrete or probabilistic assignments of known MAXSAT variables, and outputs guesses for the assignments of unknown variables via a MAXSAT SDP relaxation with weights S. A schematic depicting the forward pass of this layer is shown below. To obtain the backward pass, we analytically differentiate through the SDP relaxation (see the paper for more details).

We show that by integrating SATNet into end-to-end learning systems, we can learn the logical structure of challenging problems in a minimally supervised fashion. In particular, we show that we can: 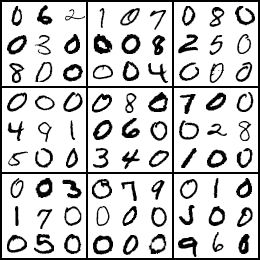 The Sudoku dataset and Parity dataset can be downloaded via