This repo contains our efficient implementation of multi-task learning (MTL) for few-shot learning benchmarks. Our empirical studies show that our efficient MTL implementation can match the state-of-the-art gradient-based meta-learning algorithms, while enjoying an order of magnitude less training time.

If you find this repo useful for your research, please consider citing our paper

This repo is mainly built upon the learn2learn package (especially its pytorch-lightning version).

Below, we introduce multiple arguments and flags you might want to modify.

Notice that the argparser does not only parse the arguments in train.py. In addition, it also parses arguments in 'lightning_episodic_module.py' and lightning_mtl.py. Furthermore, some arguments are embedded in pytorch-lightning (e.g., --max_epochs).

To replicate empirical results of multi-task learning shown in the paper, please run the following commands with your preferred root directory to save datasets and the GPU to use. The code can automatically download datasets to the root directory you specified.

In the following demo, we consider the root directory as /data and the GPU index as 0.

Here is an empirical comparison of our implementation of multi-task learning against MetaOptNet, a state-of-the-art gradient-based meta-learning algorithm. For more results, please refer to our paper.

We benchmarked the training cost of Multi-Task Learning and MetaOptNet on AWS-EC2 P3 instances. See our papers for more details. 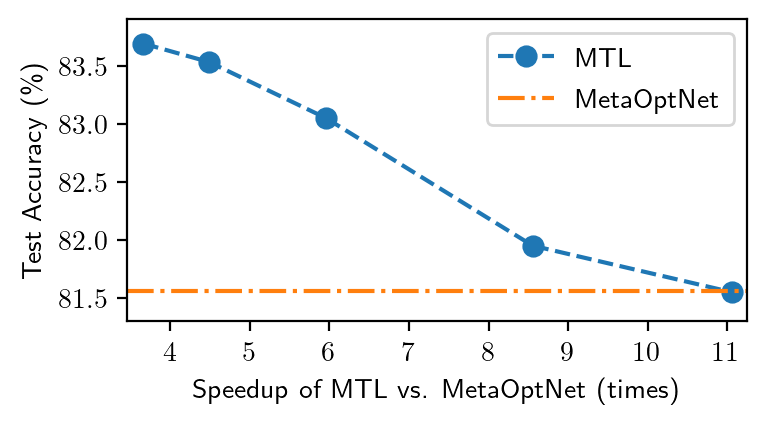 Please contact Haoxiang Wang ([email protected]) for any questions regarding this repo.

In this repo, we adopt some code from the following codebases, and we sincerely thank their authors: