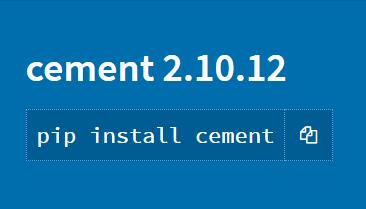 Cement is an advanced CLI Application Framework for Python. Its goal is to introduce a standard, and feature-full platform for both simple and complex command line applications as well as support rapid development needs without sacrificing quality. Cement is flexible, and it's use cases span from the simplicity of a micro-framework to the complexity of a mega-framework. Whether it's a single file script, or a multi-tier application, Cement is the foundation you've been looking for.

The first commit to Git was on Dec 4, 2009. Since then, the framework has seen several iterations in design, and has continued to grow and improve since it's inception. Cement is the most stable, and complete framework for command line and backend application development.

NOTE: 2.11.x is the development version of Cement. Please use stable/2.10.x in production until stable/2.12.x is released. Additionally, it is unlikely that this branch will see any further development, as all future development is currently happening in the portland branch in prepartion for Cement 3 (sometime in 2018).

Cement core features include (but are not limited to):

There has been a little chatter about 'personal' kanban on the tubes lately.

json interactive stream editor (jq + up) - for Linux and MacOS.

Scan a file directly from your terminal using VirusTotal API.

Click is a Python package for creating beautiful command line interfaces in a composable way with as little code as necessary.

plotting in the terminal.