Code and instructions for creating Artificial Life in a non-traditional way, namely with Reinforcement Learning instead of Evolutionary Algorithms.

Although Evolutionary Algorithms have shown to result in interesting behavior, they focus on learning across generations whereas behavior could also be learned during ones lifetime. This is where Reinforcement Learning comes in, which learns through a reward/punishment system that allows it to learn new behavior during its live time. Using Reinforcement Learning, entities learn to survive, reproduce, and make sure to maximize the fitness of their kin. 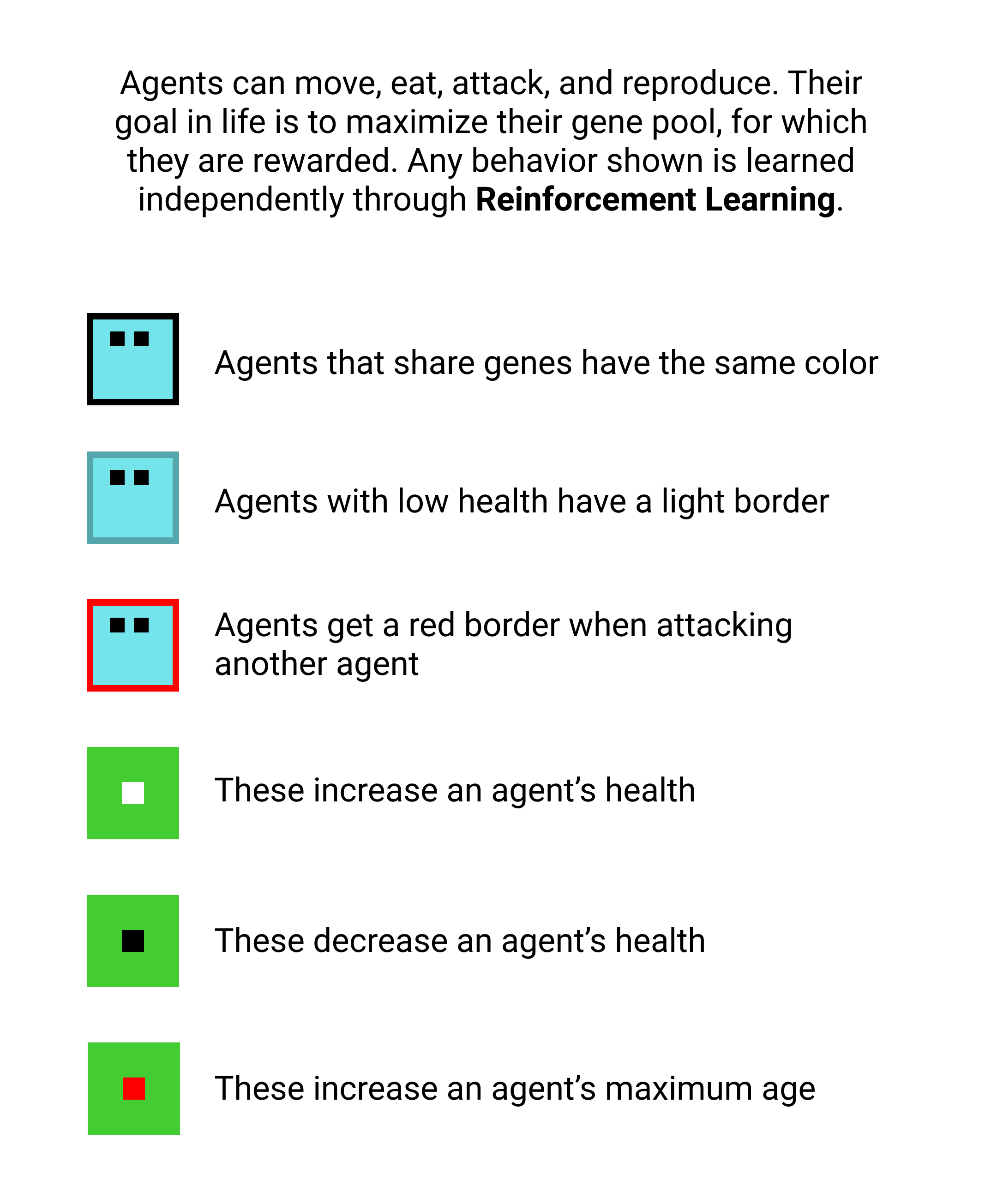 The simulation above is a good summary of what this project is about. Entities move and learn independently, eat, attack other entities, and reproduce. This is all possible by applying Reinforcement Learning algorithms to each entity, such as DQN and PPO.

The general principle is simple, each entity starts by randomly executing some actions and will slowly learn, based on specific rewards, whether those actions helped or not. The entity is punished if the action is poor and rewarded if it was helpful.

It is then up to the entities to find a way to survive as long as possible while also making sure their kin is in good shape as possible.

To get started, you will only need to install the requirements and fork/download the ReinLife package, together with the train.py and test.py files.

Due to the many parameters within each model and the environment itself, it is advised to start with train.py and test.py. These files have been prepared such that you can run them as is.

To train one or models, simply run:

This will start training the models for 15_000 episodes. The most important variable here is static_families. If this is set to True, then there will be at most as many genes as the number of brains chosen. Thus, you will only see two colors. If you set this to False, then any number of genes will be created each with their own brain.

To test one or models, simply run:

The models above are pre-trained (see results below).
You can choose any number of brains that you have trained previously. Note, make sure to set all models (except PPO) to training=False, otherwise it will demonstrate more random behavior.

It is possible to run the training code in google colaboratory if you need more computing power. You start by installing pygame and cloning the repo:

After that, you are ready to run the training code:

Then, simply look at the files on the left in ReinLife/experiments/... to find the experiment that was run.

The environment is build upon a numpy matrix of size n * m where each grid has a pixel size of 24 by 24. Each location within the matrix represents a location which can be occupied by only a single entity.

Agents are entities or organisms in the simulation that can move, attack, reproduce, and act independently.

Each agent has the following characteristics:

An agent can perform one of the following eight actions:

The order of action execution is as follows:

An agent can occupy any un-occupied space and, from that position, can move up, down, left or right. Entities cannot move diagonally. The environment has no walls, which means that if an entity moves left from the most left position in the numpy matrix, then it will move to the most right position. In other words, the environment is a fully-connected world.

Although the movement in itself is not complex, it becomes more difficult as multiple entities want to move into the same spot. For that reason, each entity checks whether the target coordinate is unoccupied and if no other entity wants to move in that space. It does this iteratively as the target coordinate changes if an entity cannot move.

An agent can attack in one of four directions:

Each agent learns continuously during its lifetime. The end of an episode is marked by the end of an agents life.

When a new entity is reproduced, it inherits its brain (RL-algorithm) from its parents.

The field of view of each agent is a square surrounding the agent. Since the world is fully-connected, the agent can see "through" walls.

The input for the neural network can be see in the image below: There are three grids of 7x7 (example shows 5x5) that each show a specific observation of the environment:

The reward structure is tricky as you want to minimize the amount you steer the entity towards certain behavior. For that reason, I've adopted a simple and straightforward fitness measure, namely:

Where r is the reward given to agent i at time t. The δ is the Kronecker delta which is one if the the gene of agent i, gi, equals the gene of agent j, gj, and zero otherwise. n is the total number of agents that are alive at time t. Thus, the reward essentially checks how many agents are alive that share a gene with agent i at time t and divides by the total number of agents alive.

The result is that an agent's behavior is only steered towards making sure its gene lives on for as long as possible.

Currently, the following algorithms are implemented that can be used as brains:

In order to test the quality of the trained algorithms, I ran each algorithm independently against a copy of itself to test the speed at which they converge to a high fitness. Below, you can see all algorithms battling it out with PER-D3QN coming out on top. Note, this does not mean it is necessarily the best algorithm. It might have converged faster than others which limits their learning ability.

Moreover, for each algorithm, I ran simulations with and without static families.

The parameters for test.py: