CredData (Credential Dataset) is a set of files including credentials in open source projects.
CredData includes suspicious lines with manual review results and more information such as credential types for each suspicious line.

CredData can be used to develop new tools or improve existing tools.
Furthermore, using the benchmark result of the CredData, users can choose a proper tool among open source credential scanning tools according to their use case.
We sincerely hope that CredData will help minimize credential leaks.

We offer the dataset for download as metadata files and script that would collect required code files based on the metadata.

That Linux based OS is required due to NTFS filenames issue.
Some files that would be downloaded and processed have names that are
invalid in Windows/NTFS systems (such as version->1.2.js).

Using python with lower versions may result in
OSError: [Errno 40] Too many levels of symbolic links exception.

Resulting dataset has no invalid filenames and can be used on Windows OS.

tmp directory can be removed after dataset generated.

Lines of code by language 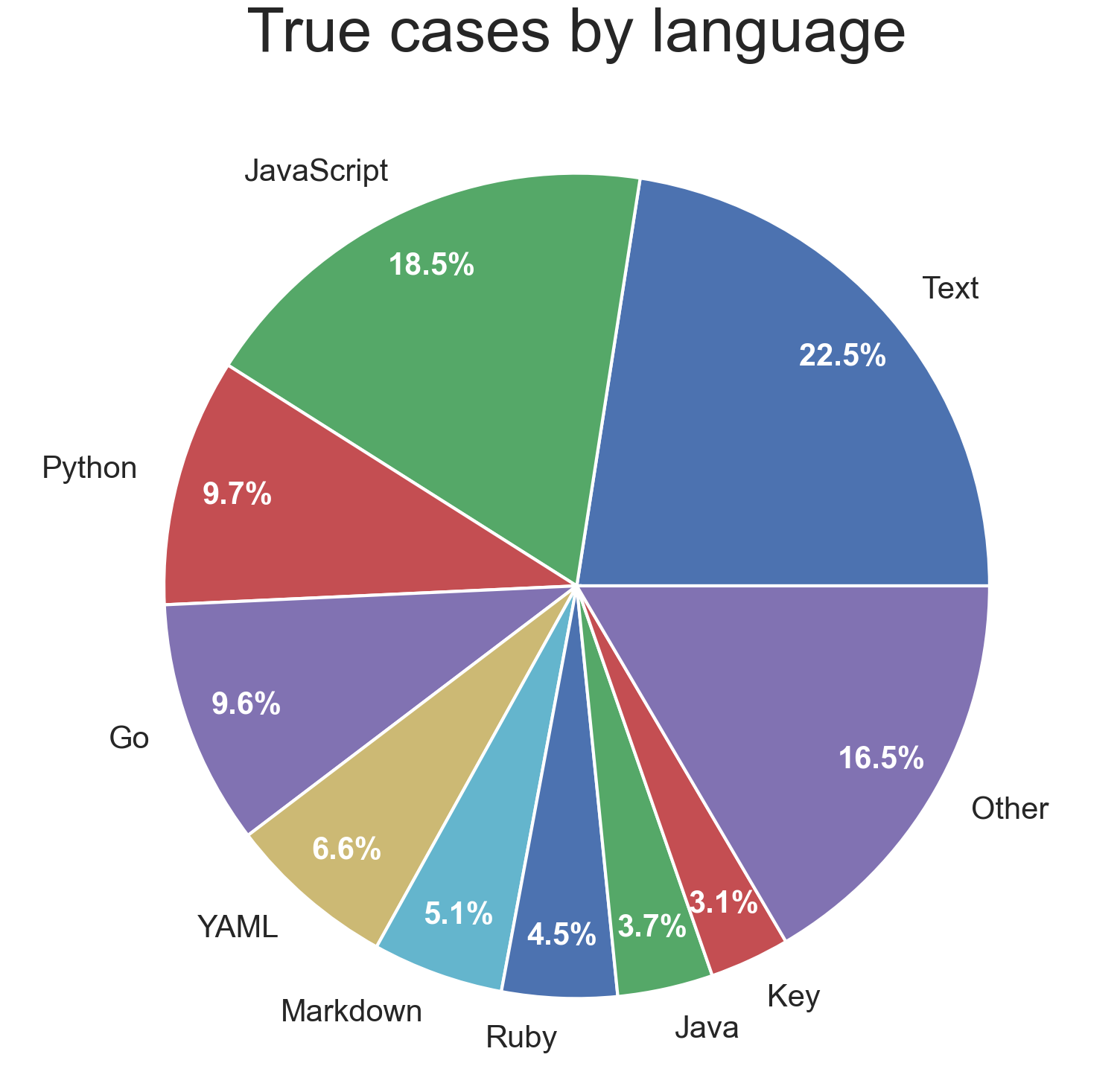 In order to collect various cases in which credentials exist, we selected publicly accessible repositories on Github through the following process:

As a result, we selected 297 repositories containing lines that we suspect had at least one credential value.

It is difficult to know whether a line included in the source code is a real credential.
However, based on human cognitive abilities, we can expect the possibility that the detected result contains actual credential information.
We classify the detection results to the three credential type.

In order to compose an accurate Ground Truth set, we proceed data review based on the following 'Ground Rules':

We could see that many credentials exist in directories/files that have the same test purpose as test/tests.
In the case of these values, people often judge that they contain a real credential, but we do not know whether this value is an actual usable credential or a value used only for testing purposes.
We classify those values as True in order to prevent the case of missing real usable credentials.
Since it may be necessary to separate the values in the future, we have separated the files for testing and the files that are not. (Check metadata or data set)

Properties on the Metadata

Labeled data divided into 8 major categories according to their properties.

Relationship between Data and Metadata

You can see metadata files in the meta directory.
A single metadata file contains rows including line location, value index and GT(GroundTruth) information about the suspect credential information for a specific repository.

Let's look at the meta/02dfa7ec.csv. file as an example.

Convert the above line with only essential columns into a table format:

When you check the 83th line of the file, you can see that the following line exists.

In here, you can see the credential based on the values of ValueStart and ValueEnd in the metadata.

That the corresponding value is an obfuscated value, not an actual credential value. For that part, please refer to the following Obfuscation section.

If the suspicious lines are included in the dataset as it is, the credential values actually used in real may be leaked, which is not a desirable result.

To avoid such cases we proceeded:

To prevent leakage of the actual credential value in the file, we can mask the line that is supposed to be credential or change it to a random string.
However, this masking and changing to a random string can make the side effects to the detection performance of several tools.
We have applied other methods to substitute the actual credential values within the limits of ensuring the detectability of these various tools.

Even if the line suspected of having a credential in the file is obfuscated, you can easily check the original credential value and where it came from by the information of the repository (repo name, directory structure, file name).
To prevent this from happening, we obfuscated the directory structure and file names.
Files with lines suspected of being credential / detected by the tool.
It is saved in the form of data/RepoID/(src|test)/FileID.FILE_EXTENSION.
RepoID and FileID are not opened separately, but original repository information can be provided only for research purposes and the actual repository owner through separate contact.
For contact information, please refer to the How to Contact section.

A table of performance metrics for each tool tested based on CredData.
The content will be updated in detail with the release of our tool in October.
For the tools used, see the Used Tools for Benchmarking section below.

You can use CredData on your research.

How to Get Involved

In addition to developing under an Open Source license, A use an Open Source Development approach, welcoming everyone to participate, contribute, and engage with each other through the project.

A recognizes the following formal roles: Contributor and Maintainer. Informally, the community may organize itself and give rights and responsibilities to the necessary people to achieve its goals.

A Contributor is anyone who wishes to contribute to the project, at any level. Contributors are granted the following rights, to:

Contributors are required to:

Contributors who show dedication and skill are rewarded with additional rights and responsibilities. Their opinions weigh more when decisions are made, in a fully meritocratic fashion.

A Maintainer is a Contributor who is also responsible for knowing, directing and anticipating the needs of a given a Module. As such, Maintainers have the right to set the overall organization of the source code in the Module, and the right to participate in the decision-making. Maintainers are required to review the contributor’s requests and decide whether to accept or not the contributed data.

Please post questions, issues, or suggestions into Issues. This is the best way to communicate with the developer.