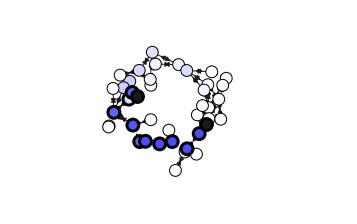 Graph Nets is DeepMind's library for building graph networks in Tensorflow and Sonnet.

What are graph networks?

A graph network takes a graph as input and returns a graph as output. The input
graph has edge- (E ), node- (V ), and global-level (u) attributes. The
output graph has the same structure, but updated attributes. Graph networks are
part of the broader family of "graph neural networks" (Scarselli et al., 2009).

The Graph Nets library can be installed from pip.

This installation is compatible with Linux/Mac OS X, and Python 2.7 and 3.4+.

The library will work with both the CPU and GPU version of TensorFlow, but to allow for that it does not list Tensorflow as a requirement, so you need to install Tensorflow separately if you haven't already done so.

To install the Graph Nets library for CPU, run:

To install the Graph Nets library for GPU, run:

The following code constructs a simple graph net module and connects it to data.

The library includes demos which show how to create, manipulate, and
train graph networks to reason about graph-structured data, on a
shortest path-finding task, a sorting task, and a physical prediction task.
Each demo uses the same graph network architecture, which highlights the
flexibility of the approach.

Try the demos in your browser in Colaboratory

To try out the demos without installing anything locally, you can run the demos
in your browser (even on your phone) via a cloud Colaboratory backend. Click a
demo link below, and follow the instructions in the notebook.

The "shortest path demo" creates random graphs, and trains a graph network to
label the nodes and edges on the shortest path between any two nodes. Over a
sequence of message-passing steps (as depicted by each step's plot), the
model refines its prediction of the shortest path.

The "sort demo" creates lists of random numbers, and trains a graph network to
sort the list. After a sequence of message-passing steps, the model makes an
accurate prediction of which elements (columns in the figure) come next after
each other (rows).

The "physics demo" creates random mass-spring physical systems, and trains a
graph network to predict the state of the system on the next timestep. The
model's next-step predictions can be fed back in as input to create a rollout of
a future trajectory. Each subplot below shows the true and predicted mass-spring
system states over 50 steps. This is similar to the model and experiments in
Battaglia et al. (2016)'s "interaction networks".

Run the demos on your local machine

To install the necessary dependencies, run:

To try the demos, run:

then open a demo through the Jupyter notebook interface.

Official pytorch implementation of the paper: "TOAD-GAN: Coherent Style Level Generation from a Single Example" For more information on TOAD-GAN.

Supervised deep networks are among the best methods for finding correspondences in stereo image pairs.

Software that can generate photos from paintings, turn horses into zebras, perform style transfer, and more.