Discord bot for displaying Advent of Code private leardboards, as well as custom leaderboards where participants can set their own start times. The latter function is ideal for participants in different time zones looking for a way to compete with each other.

The Leaderboard in Discord 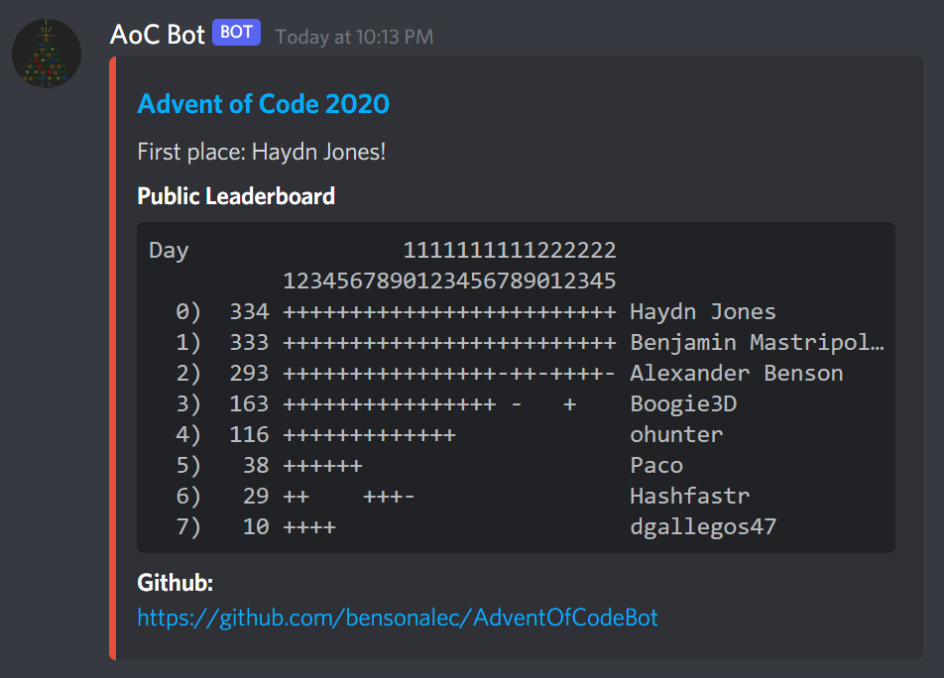 In order to configure the bot you’ll need to open the config located at /src/config.py and set the YEAR, SESSION_COOKIE, DISCORD_TOKEN and LEADERBOARD. The YEAR should be whichever year you’re trying to get on the scoreboard, the SESSION_COOKIE should be the session cookie you get when logging into Advent of Code, and the LEADERBOARD should be the ID of the leaderboard you’re trying to access. You will need to set up a Discord bot and add it to the server you plan to use this bot in, and then retrieve the bot token and set the DISCORD_TOKEN to be that.

This bot provides two unique methods of scoring the leaderboard, specifically based on start time of a problem. Both scoring methods work by counting the number of players on the leaderboard (n), then for each star giving the first player to finish n stars, the second player n – 1 stars, and so on, until the last player recieves 1 star.

The original scoring (!plb) uses the exact same scoring conditions as the original advent of code leaderboard, where start time for a problem is set by the time the problem opens (Midnight EST) for each day.

The custom scoring (!clb) uses custom set start times by players. These are set using the !start <day> command after a user has registered with !register <username>. If a user has not set a start time for a problem, the scoring algorithm will use the time that problem originally opened at Midnight EST of that day.