This repository implements the Householder transformation algorithm for calculating orthogonal matrices and orthonormal frames. The algorithm is implemented as a Python package with differentiable bindings to PyTorch. In particular, the package provides an enhanced drop-in replacement for the torch.orgqr function, which was renamed into torch.linalg.householder_product as of PyTorch 1.9.

This repository implements the Householder transformation algorithm for calculating orthogonal matrices and orthonormal
frames. The algorithm is implemented as a Python package with differentiable bindings to PyTorch. In particular, the
package provides an enhanced drop-in replacement for the torch.orgqr function, which was renamed into
torch.linalg.householder_product as of PyTorch 1.9.

PyTorch 1.7 implements matrix exponential function torch.matrix_exp, which can be repurposed to performing the
orthogonal transformation when the input matrix is skew-symmetric.

The Householder transformation takes a matrix of Householder reflectors parameters of shape d x r with
d >= r > 0 (denoted as 'thin' matrix from now on) and produces an orthogonal matrix of the same shape.

torch_householder_orgqr(param) is the recommended API in the Deep Learning context. Other arguments of this function
are provided for compatibility with the new torch.linalg.householder_product
(Reference)
and old torch.orgqr
(Reference) interfaces.

The parameter param is a matrix of size d x r or a batch of matrices b x d x r of Householder reflectors
parameters. The LAPACK convention suggests to structure the matrix of parameters as shown in the figure on the right.

Given a matrix param of size d x r, here is a simple way to construct a valid matrix of Householder reflectors
parameters from it:

This result can be used as an argument to torch_householder_orgqr.

Given a tuple of b (batch size), d (matrix height), and r (matrix width), we generate a random batch of orthogonal
parameters of the given shape and perform a fixed number of orthogonal transformations with
two methods. We then associate each such tuple with a ratio of run times taken by the functions.

We perform a sweep of matrix dimensions d and r, starting with 1 and doubling each time until reaching 32768.
The batch dimension is swept similarly until reaching the maximum size of 2048. The sweeps were performed
on a single NVIDIA P-100 GPU with 16 GB of RAM using the code from the benchmark.

Since the ORGQR function's convention assumes only thin matrices with d >= r > 0, we skip the evaluation of fat
matrices altogether.

The torch.matrix_exp only deals with square matrices; hence to transform a thin matrix with d > r, we perform
transformation of a square skew-symmetric matrix d x d and then take a d x r minor from the result. This aspect
makes torch.matrix_exp especially inefficient for transforming thin orthonormal frames and provides major speed gains
to the Householder transformation.

All experiments are conducted with float32 dtype, unless specified otherwise. We set a timeout of 10 min for each
experiment, which leaves roughly 5 min for each transformation (including one mandatory warm-up iteration). Those
interested in revealing true values in magenta and yellow areas in the plots below can increase the timeout and re-run
the corresponding experiments.

With a few exceptions of square matrices, torch-householder (HH_OURS) is tens of times faster than torch.matrix_exp
(MEXP), and becomes especially efficient with large batch sizes. 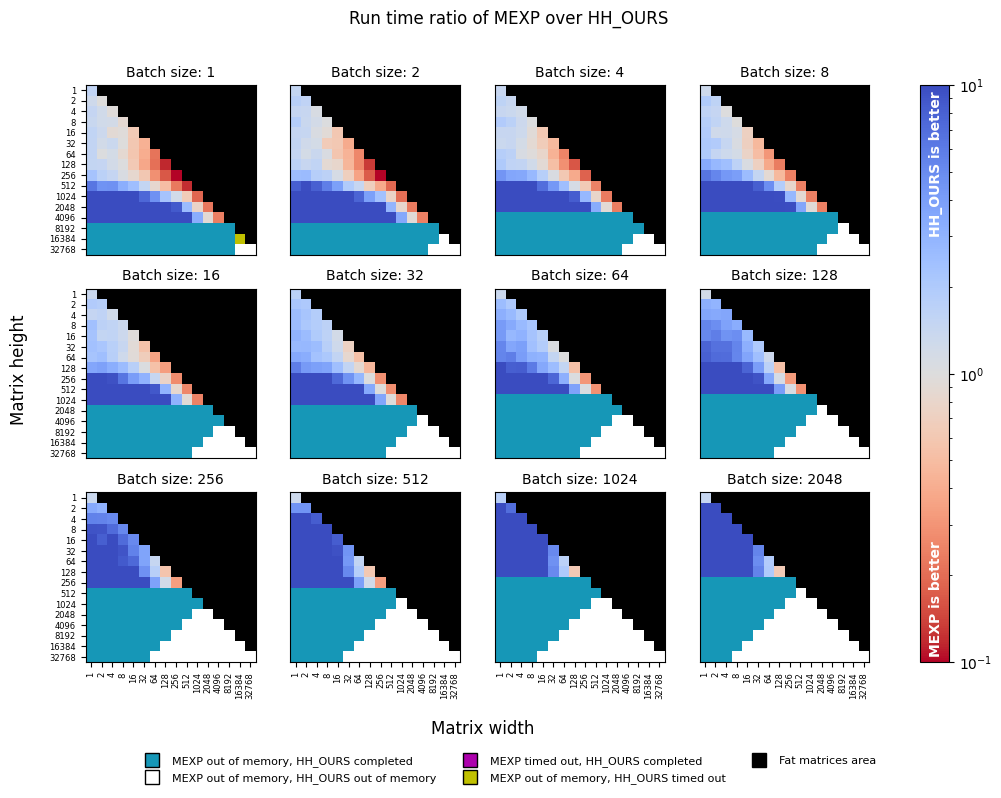 In the numerical precision, torch-householder dominates torch.matrix_exp in all configurations. 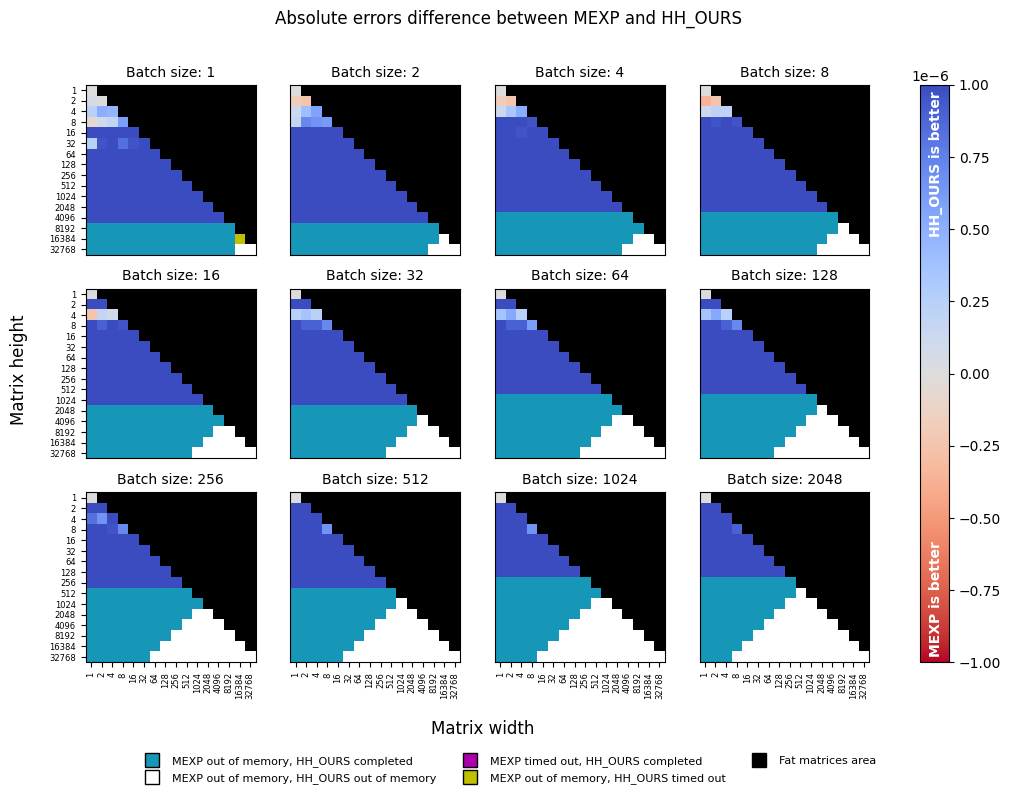 Despite the highly-efficient CUDA-accelerated backends behind torch.linalg.householder_product (HH_PT), it is slower
than torch-householder (HH_OURS) in all configurations (up to ten times and more). torch-householder is also more
memory-efficient, as it permits processing larger workloads without being killed with "out of memory" reason. 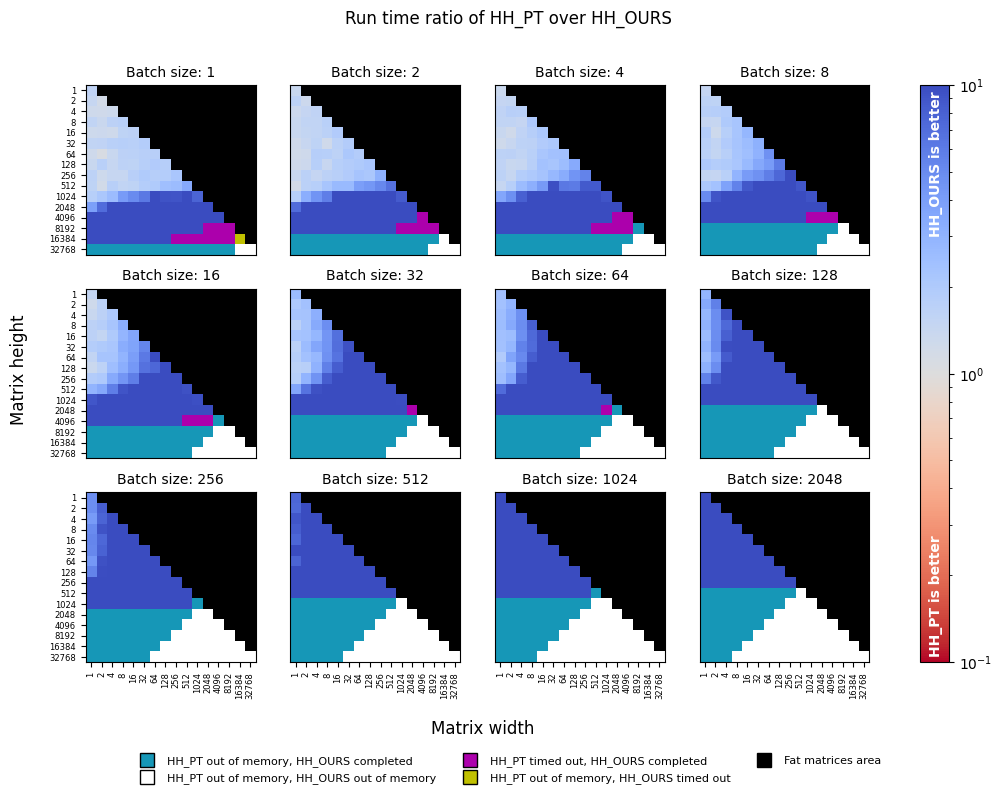 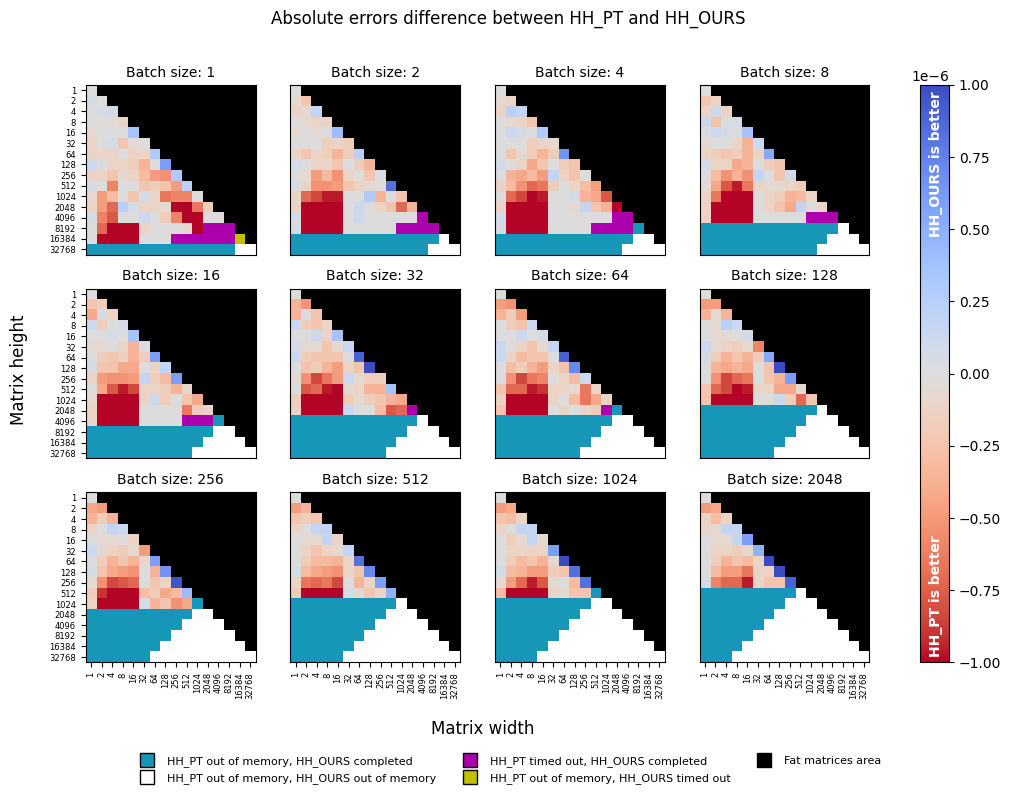 In addition to the previous experiment, we consider the same setting, but with torch-householder operating on the
dtype=torch.float64 inputs (HH_OURS_64). As can be seen from the plots below, speed-wise torch-householder is still
an order of magnitude faster, while its precision now dominates that of torch.linalg.householder_product. In terms of
memory, it is still more efficient than torch.linalg.householder_product, despite doubling the memory requirements due
to switching float32 to float64. 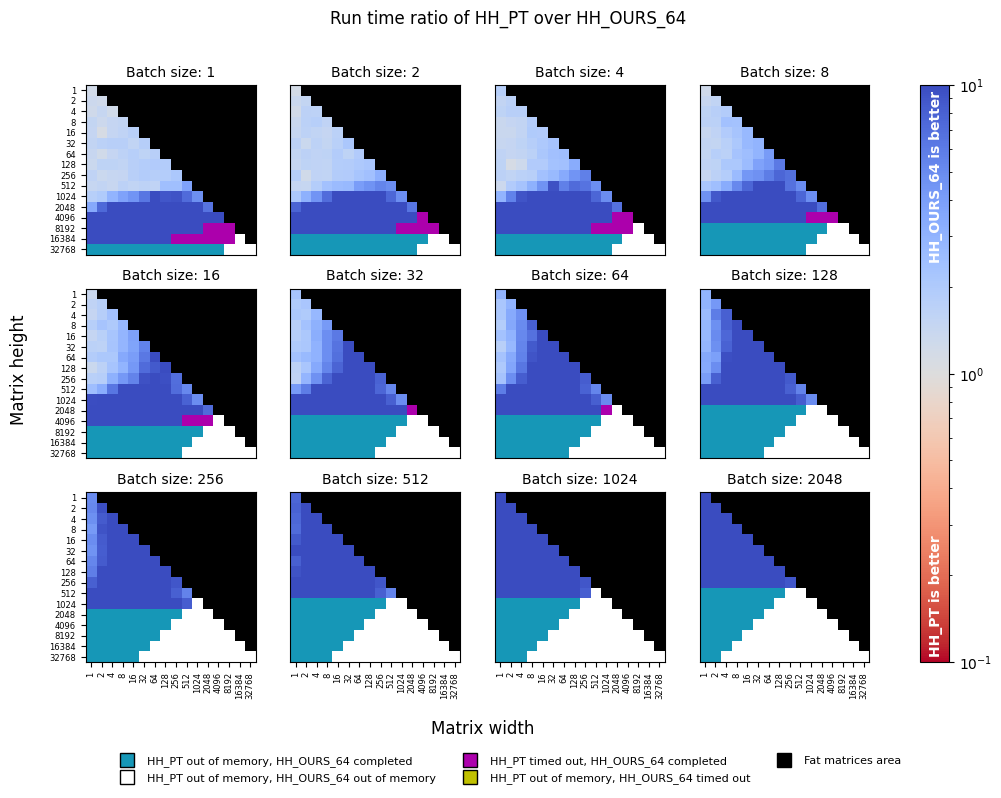 Similar to float32 case above, the following precision plot reveals a peculiar drop in precision when the smaller
dimension is less or equal than 16, which may correspond to different code paths, or different backends used in the
torch.linalg.householder_product function. 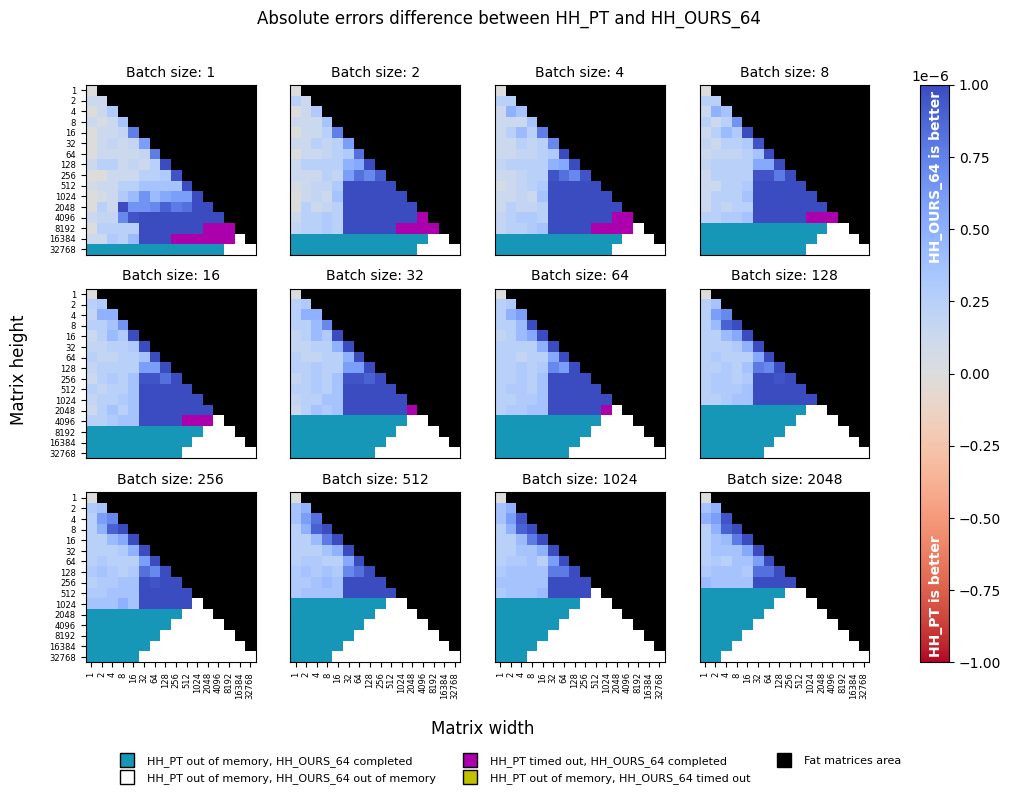 torch-householder is faster, more precise, and uses less memory than any other solution for orthogonal
transformations, bundled in PyTorch (true at least for PyTorch 1.9 and NVIDIA P100 16Gb GPU).

To cite this repository, use the following BibTeX: