Large-scale training datasets lie at the core of the recent success of neural machine translation (NMT) models. However, the complex patterns and potential noises in the large-scale data make training NMT models difficult. In this work, we explore to identify the inactive training examples which contribute less to the model performance, and show that the existence of inactive examples depends on the data distribution. We further introduce data rejuvenation to improve the training of NMT models on large-scale datasets by exploiting inactive examples. The proposed framework consists of three phases. First, we train an identification model on the original training data, and use it to distinguish inactive examples and active examples by their sentence-level output probabilities. Then, we train a rejuvenation model on the active examples, which is used to re-label the inactive examples with forward-translation. Finally, the rejuvenated examples and the active examples are combined to train the final NMT model. Experimental results on WMT14 English-German and English-French datasets show that the proposed data rejuvenation consistently and significantly improves performance for several strong NMT models. Extensive analyses reveal that our approach stabilizes and accelerates the training process of NMT models, resulting in final models with better generalization capability.

This implementation is based on fairseq(v0.9.0), with customized modification of scripts.

To start, you need to clone this repo and install fairseq firstly. Use the following pip command in fairseq/:

Take the Transformer-Base model and WMT14 En-De dataset as an example.

*Note*: A strong identification NMT models can take over the job of the rejuvenation NMT model, thus reducing the effort for training a new model. For example, the large-batch configured Transformer-Big and Dynamic-Conv models.

We evaluate the proposed Data Rejuvenation approach over various SOTA architectures and two language pairs.
Clearly, our data rejuvenation consistently and significantly improves translation performance in all cases, demonstrating the effectiveness and universality of the proposed data rejuvenation approach. It’s worth noting that our approach achieves significant improvements without introducing any additional data and model modification. 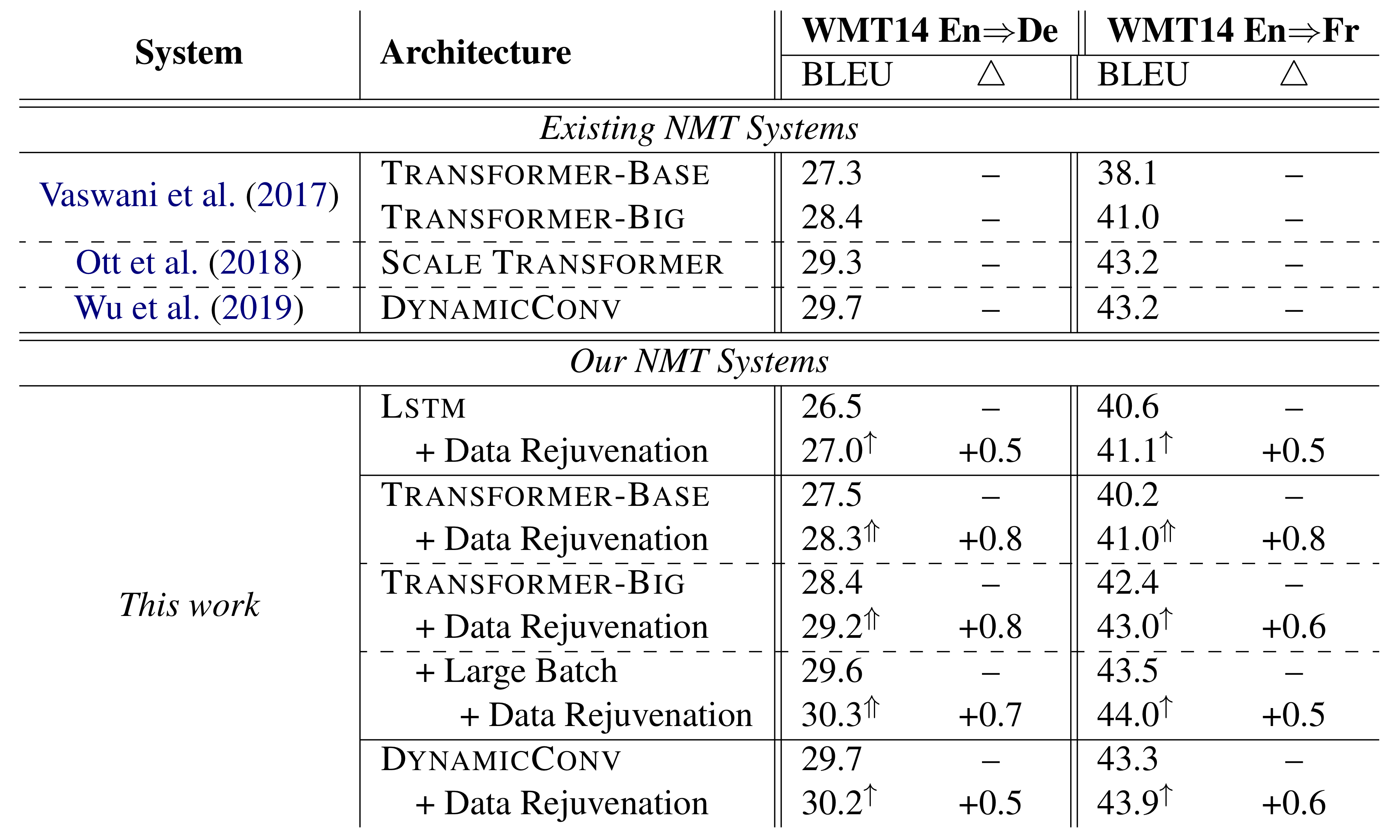 Please kindly cite our paper if you find it helpful: