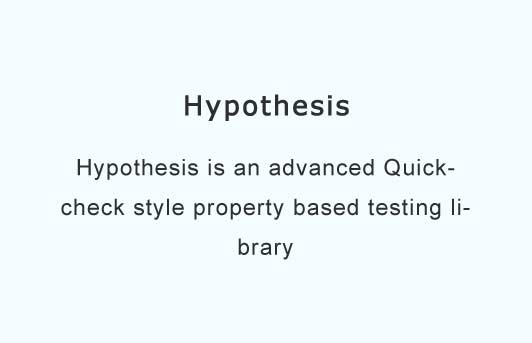 Hypothesis is family of testing libraries which let you write tests parametrized by a source of examples. A Hypothesis implementation then generates simple and comprehensible examples that make your tests fail. This simplifies writing your tests and makes them more powerful at the same time, by letting software automate the boring bits and do them to a higher standard than a human would, freeing you to focus on the higher level test logic.

This sort of testing is often called "property-based testing", and the most widely known implementation of the concept is the Haskell library QuickCheck, but Hypothesis differs significantly from QuickCheck and is designed to fit idiomatically and easily into existing styles of testing that you are used to, with absolutely no familiarity with Haskell or functional programming needed.

This repository will eventually house all implementations of Hypothesis, but we are currently in the process of consolidating the existing repositories into a single one.

FuzzBench is a free service that evaluates fuzzers on a wide variety of real-world benchmarks, at Google scale.

Helium is a Python library for automating web browsers.

The definitive testing tool for Python. Born under the banner of Behavior Driven Development (BDD).