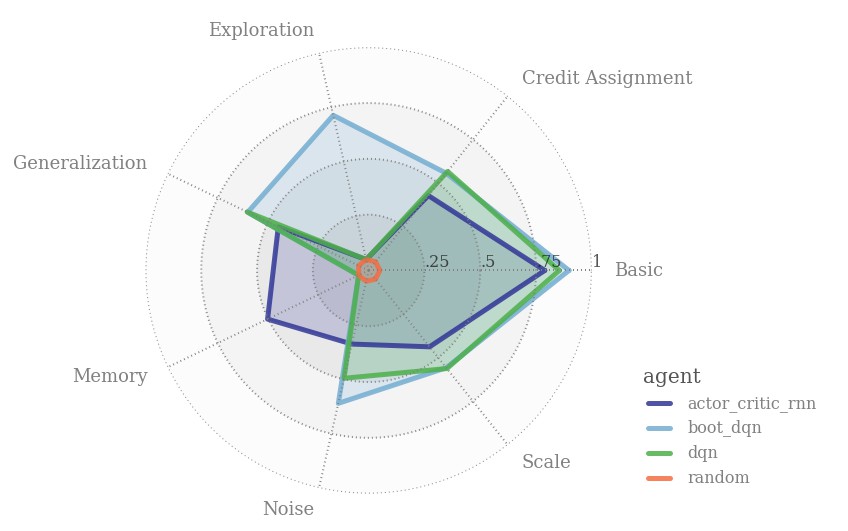 bsuite is a collection of carefully-designed experiments that investigate core capabilities of a reinforcement learning (RL) agent with two main objectives.

This library automates evaluation and analysis of any agent on these benchmarks.
It serves to facilitate reproducible, and accessible, research on the core
issues in RL, and ultimately the design of superior learning algorithms.

For a more comprehensive overview, see the accompanying [paper].

bsuite is a collection of experiments, defined in the [experiments]
subdirectory. Each subdirectory corresponds to one experiment and contains:

bsuite works by logging results from "within" each environment, when loading
environment via a
load_and_record* function.
This means any experiment will automatically output data in the correct format
for analysis using the notebook, without any constraints on the structure of
agents or algorithms.

If you are new to bsuite you can get started in our colab tutorial.
This Jupyter notebook is hosted with a free cloud server, so you can start
coding right away without installing anything on your machine. After this,
you can follow the instructions below to get bsuite running on your local machine.

We have tested bsuiteon Python 3.6. We do not attempt to maintain a working
version for Python 2.7.

To install bsuite, run the command

or clone the repository and run

To install the package while being able to edit the code (see baselines below),
run

To also install dependencies for the baselines/ examples (excluding Gym and
Dopamine examples), install with:

Environments are specified by a bsuite_id string, for example "deep_sea/7".
This string denotes the experiment and the (index of the) environment settings
to use, as described in the technical overview section.

The sequence of bsuite_ids required to run all experiments can be accessed
programmatically via:

This module also contains bsuite_ids for each experiment individually via
uppercase constants corresponding to the experiment name, for example:

We include two implementations of automatic logging, available via:

We also include a terminal logger in [logging/terminal_logging.py], exposed
via bsuite.load_and_record_to_terminal.

It is easy to write your own logging mechanism, if you need to save results to a
different storage system. See the CSV implementation for the simplest reference.

Interacting with an environment

Our environments implement the Python interface defined in
dm_env.

More specifically, all our environments accept a discrete, zero-based integer
action (or equivalently, a scalar numpy array with shape ()).

To determine the number of actions for a specific environment, use

Each environment returns observations in the form of a numpy array.

We also expose a bsuite_num_episodes property for each environment in bsuite.
This allows users to run exactly the number of episodes required for bsuite's
analysis, which may vary between environments used in different experiments.

Example run loop for a hypothetical agent with a step() method.

To use bsuite with a codebase that uses the
OpenAI Gym interface, use the GymWrapper
class in [utils/gym_wrapper.py]:

Note that bsuite does not include Gym in its default dependencies, so you may
need to pip install it separately.

These environments all have small observation sizes such that you should expect
reasonable performance running with a small network in a single process on CPU.

Complete descriptions of each environment and their corresponding experiments
are found in the [analysis/results.ipynb] Jupyter notebook.

We include implementations of several common agents in the baselines
subdirectory, along with a minimal run-loop.

See the installation section for how to include the required
dependencies (mainly TensorFlow and
Sonnet) at install time. These
dependencies are not installed by default, since bsuite does not require users
to use any specific machine learning library.

Running the entire suite of experiments

Each of the agents in the baselines folder contains a run script which
serves as an example which can run against a single environment or against the
entire suite of experiments, by passing the --bsuite_id=SWEEP flags; this will
start a pool of processes with which to run as many experiments in parallel as
the host machine allows. On a 12 core machine, this will complete overnight for
most agents. Alternatively, it is possible to run on Google Compute Platform
using run_on_gcp.sh, steps of which are outlined below.

run_on_gcp.sh does the following in order:

In order to run the script, you first need to create a billing account. Then
follow the instructions
here to setup and
initialize Cloud SDK. After completing gcloud init, you are ready to run
bsuite on Google Cloud.

For this make run_on_gcp.sh executable and run it:

After the instance is created, the instance name will be printed. Then you can
ssh into the instance by selecting Compute Engine -> Instances and clicking
SSH. Note that this is not necessary, as the result will be copied to your
local machine once it is ready. However, sshing might be convenient if you
want to make local changes to agent and environments. In this case, after
sshing, do

to activate the virtual environment. Then you can run agents via

bsuite comes with a ready-made analysis Jupyter notebook included in
[analysis/results.ipynb]. This notebook loads and processes logged data, and
produces the scores and plots for each experiment. We recommend using this
notebook in conjunction with Colaboratory.

We provide an example of a such bsuite report here.

You can use bsuite to generate an automated 1-page appendix, that summarizes
the core capabilities of your RL algorithm. This appendix is compatible with
most major ML conference formats. For example output run,

More examples of bsuite reports can be found in the reports/ subdirectory.

If you use bsuite in your work, please cite the accompanying paper:

Yaspin provides a full-featured terminal spinner to show the progress during long-hanging operations.

Lightly is a computer vision framework for self-supervised learning.

Starter pack for Bokeh plots in a Material Design dashboard interacting with Flask.