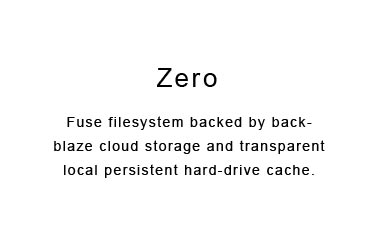 Ideally, it feels like an infinite local file system because it keeps those files local that are used while moving those files to the remote storage that haven't been accessed in a long time.

This is WORK IN PROGRESS

There are a few known issues and race conditions. For example, the ctime on the files may be newer than the correct value. Also, writes and reads are slow.
Do not use in production.

However, the code is a mess and needs to be refactored and cleaned up significantly.

Here, accountId, applicationKey and bucketId are the corresponding backblaze settings and sqliteFileLocation is simply the path to a place where the sqlite databases containing the state of the virtual file system can be stored.
targetDiskUsage is the amount of disk space (in GB) that you would like to use for local caching.

to mount the file system.
You will also need to run

to start the worker process that moves files between disk and cloud.

There are 3 categories of tests:

This is the implementation of paper Deep Exemplar-based Colorization by Mingming He*, Dongdong Chen*, Jing Liao, Pedro V.