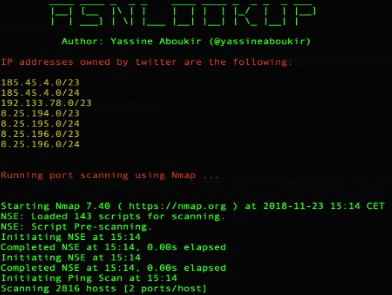 Look up IP addresses (IPv4 & IPv6) registered and owned by a specific organization for reconnaissance purposes.

An autonomous system number (ASN) is a unique number assigned to an autonomous system (AS) by the Internet Assigned Numbers Authority (IANA). An AS consists of blocks of IP addresses which have a distinctly defined policy for accessing external networks and are administered by a single organization

This tool will search an updated database for a specific organization's ASN then use the latter to look up all IP addresses (IPv4 and IPv6) registered and owned by the organization.

This script should be used during reconnaissance phase to identify properties owned by the company, and run a port scan on it to identify open ports and publicly exposed services.

The tool exports the list of IP addresses as a text file which you can use with other tools such as Masscan. On the other hand, the tool supports Nmap port scanning but it requires you to already have Nmap installed on your machine. How to?

To scan the IP addresses, add -s arugment to the command:

It will export the result to a text file in the same directory as the script (E.g: ./twitter.txt) then run Nmap as follows:

For smaller organizations the ASN will usually be that of their ISP whereas the hostname might not. One example of this is 207.97.227.245, a GitHub IP address. The ASN is AS27357 (Rackspace Hosting), but the hostname is pages.github.com.

Rich is a Python library for rich text and beautiful formatting in the terminal.

In my analysis work, I will frequently put auth credentials into environment variables. This allows me to check my code into Github without divulging any secrets.

Using the tooling in this repo, I am able to boot from linux to sinit as PID1, and from there to Emacs acting as PID2 using --script mode, performing all typical rc.boot system initialization using Emacs lisp until we hit the getty.

Extracts 10 dominating colors from the image and add the palette to the bottom of the image (inspired by colorpalette.cinema).