This HCI (Human-Computer Interaction) application in Python(3.6) will allow you to control your mouse cursor with your facial movements, works with just your regular webcam. Its hands-free, no wearable hardware or sensors needed.

At this point, you are forced to work with the facial movements I chose but I am working on making them configurable. The list of actions include:

Special thanks to Adrian Rosebrock for his amazing blog posts, code snippets and his imutils library that played an important role in making this idea of mine a reality.

Order of Execution is as follows:

Please raise an issue in case of any errors.

I definitely understand that these facial movements could be a little bit weird to do, especially when you are around people. Being a patient of benign-positional-vertigo, I hate doing some of these actions myself. But I hope to make them easier and less weird over time. Feel free to suggest some public friendly actions that I can incorporate in the project. 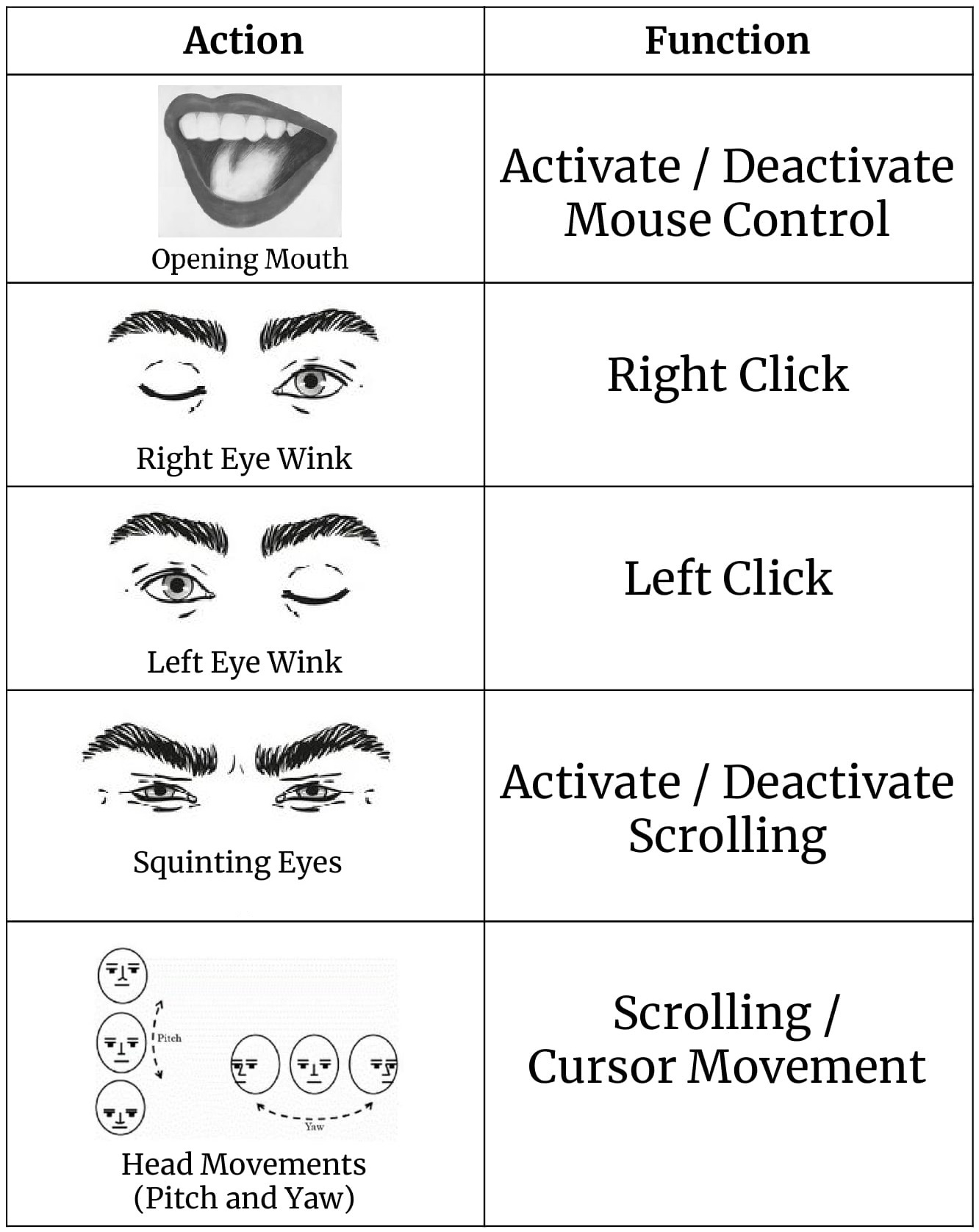 This project is deeply centered around predicting the facial landmarks of a given face. We can accomplish a lot of things using these landmarks. From detecting eye-blinks in a video to predicting emotions of the subject. The applications, outcomes and possibilities of facial landmarks are immense and intriguing.

Dlib's prebuilt model, which is essentially an implementation of, not only does a fast face-detection but also allows us to accurately predict 68 2D facial landmarks. Very handy.

Using these predicted landmarks of the face, we can build appropriate features that will further allow us to detect certain actions, like using the eye-aspect-ratio (more on this below) to detect a blink or a wink, using the mouth-aspect-ratio to detect a yawn etc or maybe even a pout. In this project, these actions are programmed as triggers to control the mouse cursor. PyAutoGUI library was used to control the mouse cursor.

You will see that Eye-Aspect-Ratio is the simplest and the most elegant feature that takes good advantage of the facial landmarks. EAR helps us in detecting blinks and winks etc.

You can see that the EAR value drops whenever the eye closes. We can train a simple classifier to detect the drop. However, a normal if condition works just fine. Something like this:

Highly inspired by the EAR feature, I tweaked the formula a little bit to get a metric that can detect open/closed mouth. Unoriginal but it works.

Similar to EAR, MAR value goes up when the mouth opens. Similar intuitions hold true for this metric as well.

The model offers two important functions. A detector to detect the face and a predictor to predict the landmarks. The face detector used is made using the classic Histogram of Oriented Gradients (HOG) feature combined with a linear classifier, an image pyramid, and sliding window detection scheme.

You can get the trained model file from http://dlib.net/files, click on shape_predictor_68_face_landmarks.dat.bz2. The model dat file has to be in the model folder.

Note: The license for the iBUG 300-W dataset excludes commercial use. So you should contact Imperial College London to find out if it's OK for you to use this model file in a commercial product.

A collection of various RL algorithms like policy gradients, DQN and PPO.
16 May 2021
zeus is a Python implementation of the Ensemble Slice Sampling method.
16 May 2021
PyTorch Connectomics: segmentation toolbox for EM connectomics
16 May 2021