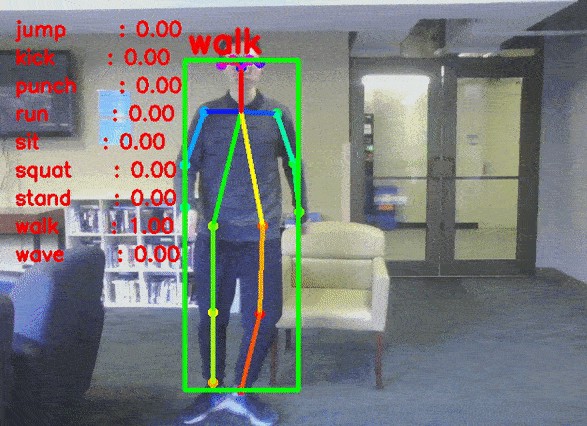 Multi-person real-time recognition (classification) of 9 actions based on human skeleton from OpenPose and a 0.5-second window.

This is my final project for EECS-433 Pattern Recognition. It's based on this github, where Chenge and Zhicheng and me worked out a simpler version.

I've tested this in a public place.
The recognition worked well for me. However, the performance became bad for (1) people who have different body shape, (2) people are far from the camera. How to improve? I guess the first thing to do is to collect larger training set from different people. Then, improve the data augmentation and featuer selection.

Besides, my simple tracking algorithm is not good when too many people (>10) appear in the scene. So I guess you can only use this project for course demo, but not for any useful applications ... T.T

Warning: The input video must be around 10 frames per second, since I'm using a 0.5s-window to extract features. On my GTX 1070, the program runs at 8 fps (with a proper image size), and the recognition works fine.

For more details about how the features are extracted, please see my report. For other parts of the algorithm, they are not included in this old report (I might update them someday).

I used the OpenPose from this Github: tf-pose-estimation. First download it:

Follow its tutorial here to download the "cmu" model. As for the "mobilenet_thin", it's already inside the folder.

Then install dependencies. I listed my installation steps as bellow:

Make sure you can successfully run its demo examples:

1). First, detect skeleton from training images and save result to txt:

3). Third, open jupyter notebook, and run this file: "src/Train.ipynb".
The trained model will be saved to "model/trained_classifier.pickle".

Now, it's ready to run the real-time demo from your web camera.

The Cross-lingual Choice of Plausible Alternatives dataset is a benchmark to evaluate the ability of machine learning models to transfer commonsense reasoning across languages.

Shameless plugin: We are a data annotation platform to make it super easy for you to build ML datasets. Just upload data, invite your team and build datasets super quick.

Pretty-print tabular data in Python, a library and a command-line utility.