pynm is an open source, low-code library in python to build neuromorphic predictive models (Classification & Regression problems) using [Spiking Neural Networks (SNNs)] (https://en.wikipedia.org/wiki/Spiking_neural_network) at ease. It allows you to go from preparing your data to deploying your spiking model within minutes. SNNs are neural networks that mimics the biological brain. In the case of SNNs, the neurons accumulate the input activation until a threshold is reached, and when this threshold is reached, the neuron empties itself from it's activation and fire. Once empty, it should indeed take some refractory period until it fires again, as it happen in the brain.

pynm is simple, easy to use and low-code. It enables users to perform end-to-end Proof-Of-Concept (POC) experiments quickly and efficiently.

PYNM is an open source library ideal for:-

Neuromorphic design finds new life in machine learning. Neuromorphic architecture has had little practical success in building machines that can tackle standard tests such as logistic regression or image recognition. But lately it has been combined with the best of machine learning, and the networks of spiking neurons, bringing new hope for neuromorphic breakthroughs. Neuromorphic computing is an umbrella term given to a variety of efforts to build computation that resembles some aspect of the way the brain is formed. The brain is incredibly efficient, and one of the things that makes it efficient is because it uses spikes. If we can get a model of a spiking neurons as part of deep nets, it can be a big boost to inference, the task of making predictions, even on the energy-constrained edge computing devices such as mobile phones.

In SNNs, there is a time axis and the neural network sees data througout time, and activation functions are spikes that are raised past a certain pre-activation threshold. Pre-activation values constantly fades if neurons aren't excited enough. Think of it like a time-distributed ReLU with spikes or no spikes at certain time steps.

Spiking Neural Networks (SNNs) are neural networks that are closer to what happens in the brain compared to what people usually code when doing Machine Learning and Deep Learning. In the case of SNNs, the neurons accumulate the input activation until a threshold is reached, and when this threshold is reached, the neuron empties itself from it's activation and fire. Once empty, it should indeed take some [refractory period](https://en.wikipedia.org/wiki/Refractory_period_(physiology) until it fires again, as it happen in the brain.

This implies adding a time axis to Artificial Neural Networks (ANNs), where signal is accumulated throughout time in a pre-activation phase, then once a threshold is reached, signal is raised to the neurons above as a firing activation. At every moment, such as when the threshold isn't reached yet, the signal's pre-activation value fades.

For more detail information about SNNs you are recommended to watch [this interesting SNN animation](https://www.youtube.com/embed/3JQ3hYko51Y?start=120) which will quickly get you a feel of what it is (especially notice how neurons gets activated only gradually over time like a storm that fire together rather than statically from their inputs).

The concept is as given in the figure. 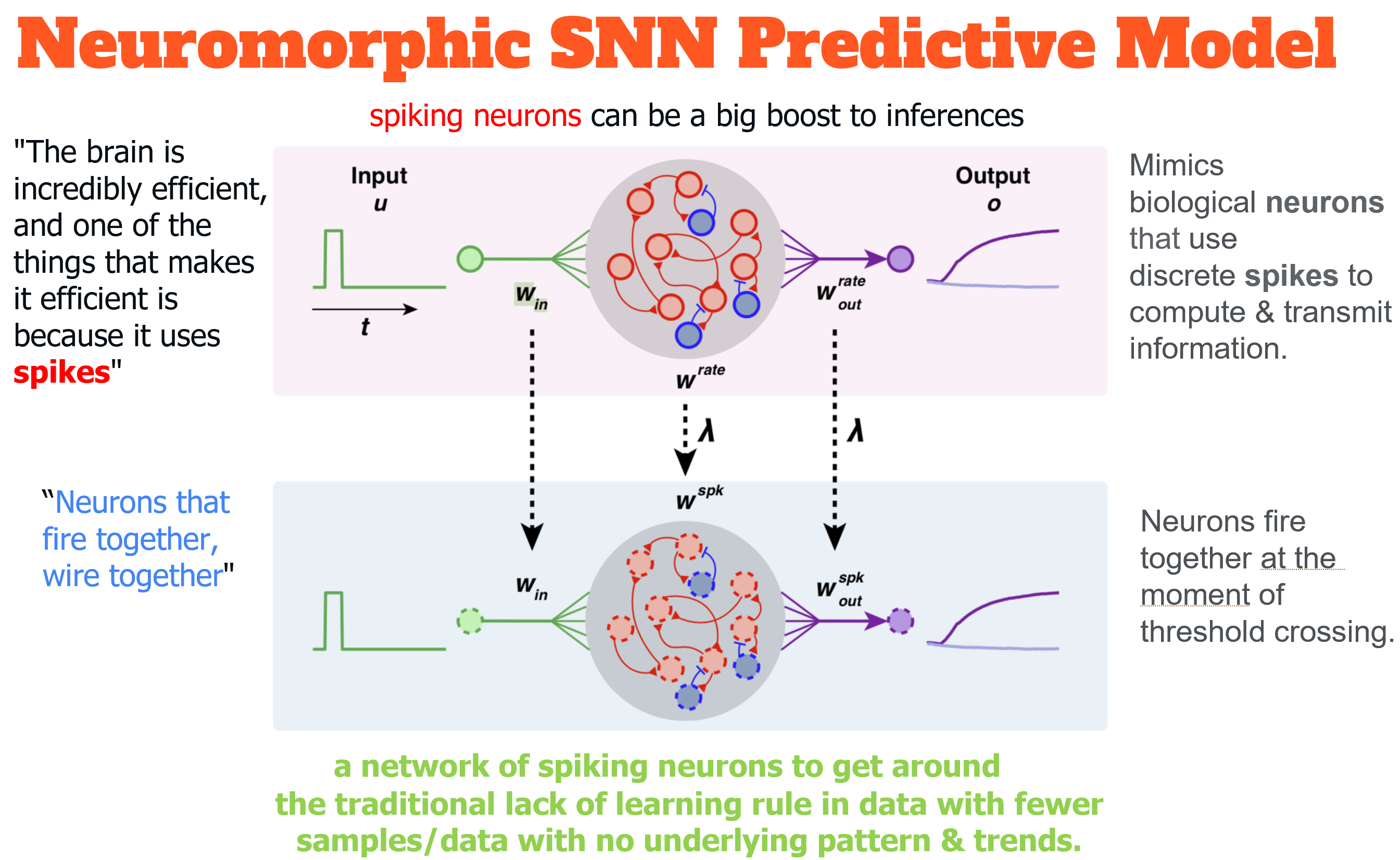 The neuron's firing method is through the following steps, where the argument x is an input:

Before anything, we need an initialize (or to empty) the state for each neuron upon starting predictions.

Then, a weight matrix multiplies the input x, which is the input dataset. It is to be noted that x was modified to be flickering randomly through time (depending on the intensity of the original input x multiplied by a random uniform noise mask), or else x is already the output of a lower deep spiking layer:

We then add the result to a decayed version of the information inside the neuron that we already had at the previous time step / time tick (Δt time elapsed). The decay_multiplier serves the purpose of slowly fading the inner activation such that we don't accumulate stimulis for too long to be able to have the neurons to rest. The decay_multiplier could have a value of 0.9 for example. Decay as such is also called exponential decay and yields an effect of [Exponential moving average](https://en.wikipedia.org/wiki/Moving_average#Exponential_moving_average) over time on the most recent values seen, which also affects the gradients upon backpropagating. So, by repeatedly multplying by 0.9 the inner activation through time, it decays and neurons unexcite themselves before firing. In this sense, it's now really true that "neurons that fire together wire together": when a pre-synaptic input is received closer to the moment of giving an output, that recentmost value will not have had the time to be decayed/faded. This way, the gradient of recent neurons that participated in exciting the current neuron that fired will be strong. Learning will be able to take place by gradient descent according to the decay's weighting's. So, in the opposite case, a stimuli that happened too long ago will suffer from vanishing gradients since it has been exponentially decayed down. So, it won't be useful in the learning process of backprop, which is what we want and respects the "neurons that fire together, wire together" idiom of Hebbian learning.

Now, we compute the activation of the neurons to find their output value. We have a threshold to reach before having the neuron activating. The ReLU function might not be the most appropriate here, but just for a working prototype ReLU was used:

Now, the magic happens. If the neuron fires, the activation of the neuron is subtracted to its inner state to reset each neuron. First, this has the effect of resetting them to a resting position such that they won't be firing constantly upon being activated once. Second, resetting them as such will clip the gradient through time to isolate each firing events from each other. SNNs as such are truly inspired from the brain, as the natural neurons also have a refractory period: neurons, once they fire, will need to wait a bit before firing again even if fully excited by lower neurons they have as inputs. So here, I even subtracted a second penalty named penalty_threshold after each resetting threshold. Disclaimer:- I wasn't sure whether the negative part in the biological refractory period was on the outputs of the neurons or inside the neurons (e.g.: axon v.s. body?), so here I've simply put it inside. Let's see how I subtract this just when the neuron fires to have it to have a refractory period:

Finally, I return the previous output, simulating a small firing delay, which may not be useful in all the case, but which may be interesting to have if the SNN that is designed was ever to have Recurrent connections which would require time offsets in the connections from top layers near the outputs back into bottom layers near the input:

Past that, to do the classification, the values of the classification output spiking neurons are averaged over the time axis so as to have one number per class to plug into the softmax cross entropy loss for classification as we know it and we backpropagate. This means the present SNN PyTorch class is reusable within any other feedforward neural network, as it repeats intputs over time with random noisy masks, and averages outputs over time.

Basically, the neurons' activation must decay through time, and fire only when getting past a certain threshold.