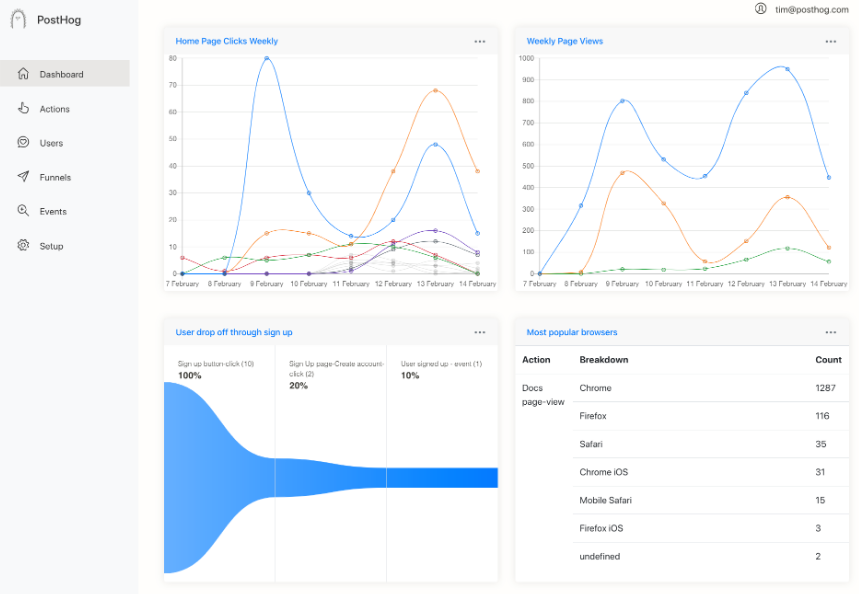 PostHog is open source product analytics, built for developers. Automate the collection of every event on your website or app, with no need to send data to 3rd parties. It's a 1 click to deploy on your own infrastructure, with full API/SQL access to the underlying data.

Join the PostHog Users Slack if you need help, want to chat, or are thinking of a new feature idea.

Many engineers find it painful to work out how their products are being used. This makes design decisions tough. PostHog solves that.

We also strongly believe 3rd party analytics don't work anymore in a world of Cookie laws, GDPR, CCPA and lots of other 4 letter acronyms. There should be an alternative to sending all of your users' personal information and usage data to 3rd parties.

PostHog gives you full control over all your users' data, while letting anyone easily perform powerful analytics.

It means you can know who is using your app, how they're using, and where you lose users in the sign up process.

What's cool about this?

PostHog is the only product-focused open source analytics library, with an event and user-driven architecture. That means tracking identifiable (where applicable) user behavior, and creating user profiles. We are an open source alternative to Mixpanel, Amplitude or Heap, designed to be more developer friendly.

There are a couple of session-based open source libraries that are nice alternatives to Google Analytics. That's not what we are focused on.

The preview image has Postgres running locally and runs in debug mode.

For a production installation you have a few options:

Heroku is the quickest way to get a production PostHog environment up-and-running.

We recommend getting at the very least a hobby-dev Postgres and Dyno for low volumes of events.

Using the posthog/posthog:latest Docker image. You'll need to spin up a separate Postgres docker container. We've included a docker-compose.yml file that does that.

Click here for instructions on upgrading PostHog on Heroku to the latest version.

Running behind a proxy?

See running behind a proxy

If at any point, you get "command not found: nvm", you need to install nvm, then use that to install node.

This repo is entirely MIT licensed. We charge for things like teams, permissioning, data lake integrations, and support. Please email [email protected] and we will gladly help with your implementation.

GEPP takes your app and Dockerize it, sets up a Kubernetes cluster and runs your app in it, configure K8s resources and produce Terraform file for Azure deployments, and more!

A commandline tool + python library to glitchify images and even make GIFs out of them!