This repository implements and evaluates convolutional networks on the Möbius strip as toy model instantiations of Coordinate Independent Convolutional Networks.

All derivations and a detailed description of the models are found in Section 5 of our paper. What follows is an informal tl;dr, summarizing the central aspects of Möbius CNNs.

Feature fields on the Möbius strip: A key characteristic of the Möbius strip is its topological twist, making it a non-orientable manifold. Convolutional weight sharing on the Möbius strip is therefore only well defined up to a reflection of kernels. To account for the ambiguity of kernel orientations, one needs to demand that the kernel responses (feature vectors) transform in a predictable way when different orientations are chosen. Mathematically, this transformation is specified by a group representation ρ of the reflection group. We implement three different feature field types, each characterized by a choice of group representation:

Convolution kernels on the Möbius strip are parameterized maps

whose numbers of input and output channels depend on the types of feature fields between which they map.
Since a reflection of a kernel should result in a corresponding transformation of its output feature field, the kernel
has to obey certain symmetry constraints.
Specifically, kernels have to be reflection steerable (or gauge equivariant), i.e. should satisfy:

The following table visualizes this symmetry constraint for any pair of input and output field types that we implement: 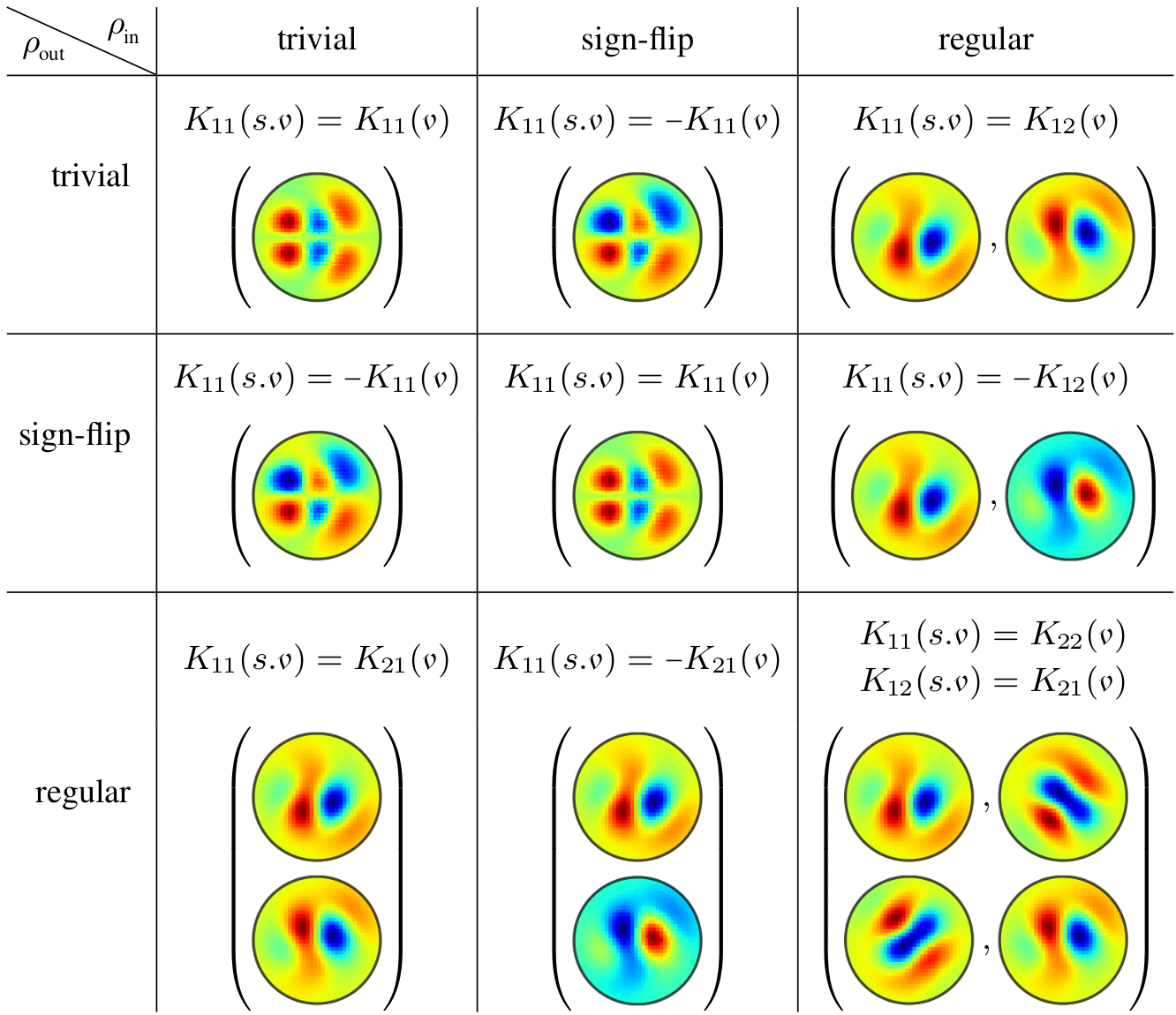 Similar equivariance constraints are imposed on biases and nonlinearities; see the paper for more
details.

Isometry equivariance:
Shifts of the Möbius strip along itself are isometries.
After one revolution (a shift by 2π), points on the strip do not return to themselves,
but end up reflected along the width of the strip:

Such reflections of patterns are explained away by the reflection equivariance of the convolution
kernels.
Orientation independent convolutions are therefore automatically equivariant w.r.t. the action of such isometries on feature fields.
Our empirical results, shown in the table below, confirm that this theoretical guarantee holds in practice.
Conventional CNNs, on the other hand, are explicitly coordinate dependent, and are therefore in particular not isometry equivariant.

Neural network layers are implemented in nn_layers.py
while the models are found in models.py.
All individual layers and all models are unit tested in unit_tests.py.

Feature fields:
We assume Möbius strips with a locally flat geometry, i.e. strips which can be thought of as being constructed by gluing two opposite ends of a rectangular flat stripe together in a twisted way.
Feature fields are therefore discretized on a regular sampling grid on a rectangular domain of
pixels.
Note that this choice induces a global gauge (frame field), which is discontinuous at the cut.

In practice, a neural network operates on multiple feature fields which are stacked in the channel dimension (a direct sum).
Feature spaces are therefore characterized by their feature field multiplicities.
For instance, one could have 10 scalar fields, 4 sign-flip fields and 8 regular feature fields, which consume in total
channels.
Denoting the batch size by

,
a feature space is encoded by a tensor of shape
.

The correct transformation law of the feature fields is guaranteed by the coordinate independence (steerability) of the network layers operating on it.

Orientation independent convolutions and bias summation:
The class MobiusConv implements orientation independent convolutions and bias summations between input and output feature spaces as specified by the multiplicity constructor arguments in_fields and out_fields, respectively.
Kernels are as usual discretized by a grid of size*size pixels.
The steerability constraints on convolution kernels and biases are implemented by allocating a reduced number of parameters, from which the symmetric (steerable) kernels and biases are expanded during the forward pass.

Coordinate independent convolutions rely furthermore on parallel transporters of feature vectors, which are implemented as a transport padding operation.
This operation pads both sides of the cut with size//2 columns of pixels which are 1) spatially reflected and 2) reflection-steered according to the field types.
The stripes are furthermore zero-padded along their width. 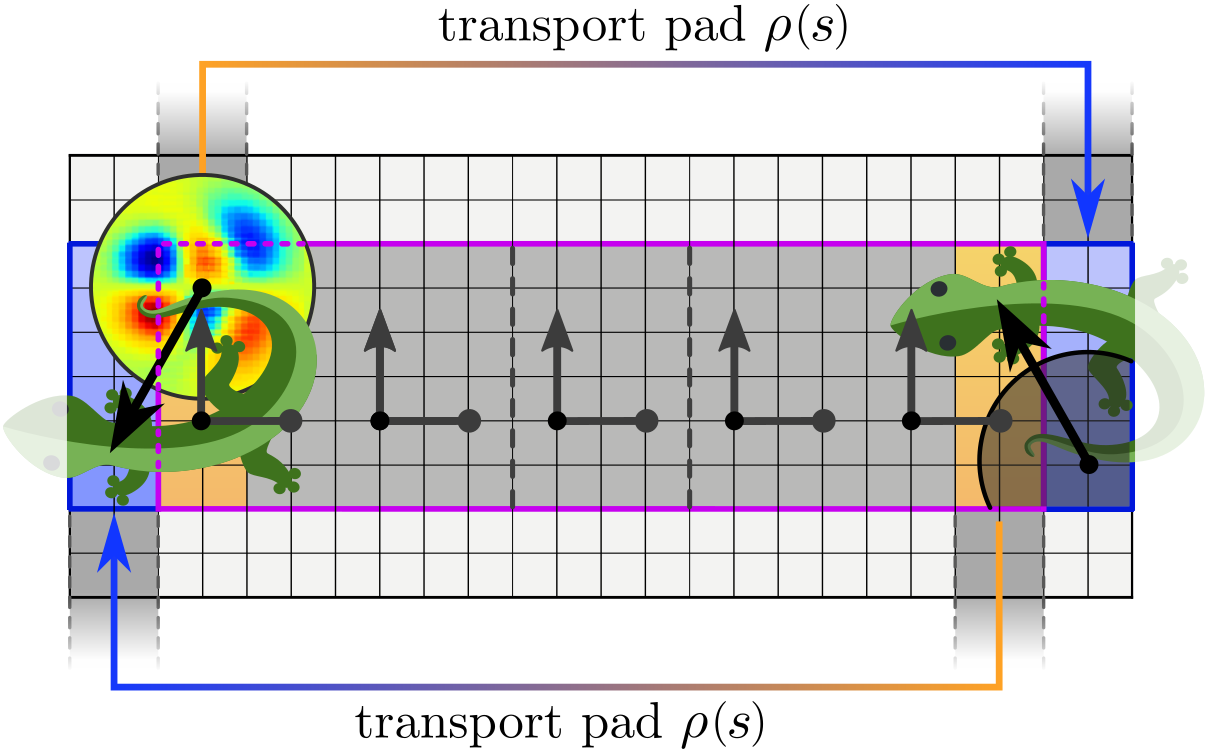 The forward pass operates then by:

As the padding added size//2 pixels around the strip, the spatial resolution of the output field agrees with that of the input field.

Orientation independent nonlinearities:
Scalar fields and regular feature fields are acted on by conventional
ELU nonlinearities,
which are equivariant for these field types.
Sign-flip fields are processed by applying ELU nonlinearities to their absolute value after summing a learnable bias parameter.
To ensure that the resulting fields are again transforming according to the sign-flip representation, we multiply them subsequently with the signs of the input features.
See the paper and the class EquivNonlin for more details.

Feature field pooling:
The module MobiusPool implements an orientation independent pooling operation with a stride and kernel size of two pixels, thus halving the fields' spatial resolution.
Scalar and regular feature fields are pooled with a conventional max pooling operation, which is for these field types coordinate independent.
As the coefficients of sign-flip fields negate under gauge transformations, they are pooled based on their (gauge invariant) absolute value.

Models:
All models are implemented in
models.py.
The orientation independent models, which differ only in their field type multiplicities but agree in their total number of channels, are implemented as class MobiusGaugeCNN.
We furthermore implement conventional CNN baselines, one with the same number of channels and thus more parameters (α=1) and one with the same number of parameters but less channels (α=2).
Since conventional CNNs are explicitly coordinate dependent they utilize a naive padding operation (MobiusPadNaive), which performs a spatial reflection of feature maps but does not apply the unspecified gauge transformation.
The following table gives an overview of the different models:

We benchmark our models on Möbius MNIST, a simple classification dataset which consists of MNIST digits that are projected on the Möbius strip.
Since MNIST digits are gray-scale images, they are geometrically identified as scalar fields.
The size of the training set is by default set to 12000 digits, which agrees with the rotated MNIST dataset.

To generate the datasets it is sufficient to call convert_mnist.py,
which downloads the original MNIST dataset via torchvision and saves the Möbius MNIST datasets in data/mobius_MNIST.npz.

The models can then be trained by calling, for instance,

The following table gives an overview of the performance of all models in two different settings, averaged over 32 runs:

The setting "shifted train digits" trains and evaluates on isometry shifted digits.
To test the isometry equivariance of the models, we train them furthermore on "centered train digits", testing them then out-of-distribution on shifted digits.
As one can see, the orientation independent models generalize well over these unseen variations while the conventional coordinate dependent CNNs' performance deteriorates.

This library is based on Python3.7.
It requires the following packages:

Logging via tensorboard is optional.