It is structured into folders which hold the code or assets for different parts of the workflow. I am using a general framework which was inspired by the CycleGAN project, and then modified to work with Pytorch Lightning.

How to run training and inference

The scripts in the root folder are for running the common high level tasks. script_generate.sh generates samples for the model of a particular experiment. script_train.sh trains a model on some data, as specified by a particular hyperparameters file, though any of the hparams can be overriden as argparse arguments. You can add --help to to get some explanation of what the different options/hparams do. Note that the options parser (in training/options/base_options.py) gathers the set of available options by aggregating the base options with the options defined in the particular model and dataset you have specified in the model and dataset_name options.

Training on your own data

More options: You can specify a different experiment name which will look for a different hparams file inside training/hparams/dance_combined. You can also directly pass arguments to ./script_train.sh. You can see some of them by typing python training/train.py -h, but this is not a complete list, as some arguments are specific to datasets and models. You can see the model and dataset specific arguments by looking at their class definitions. The dataset definition is in training/datasets/multimodal_dataset.py and the model is in models/transflower_model.py.

To give a more concrete example, and following the exact workflow in the provided Google colab which I recommend using to try the model, assume we have a filename called myCoolSong.wav. After installing dependencies, we can create a folder to store it, and also one for the seeds and pretrained models, and download them. This assumes you have gsutil installed.

We then extract the music features as follows

Finally, we can generate as follows

and the result will be inside inference/generated/transflower_expmap_old/videos.

Next we explain in some more detail the structure and options of the general dataset format we use, as well as models available and their main options

The multimodal dataset in training/datasets is designed to be a general purpose dataset which works for all the experiments within the scope of this repository. It expects numpy arrays corresponding to time-synced and same-length sequneces of a number of "input modalities" and a number of "output modalities", to be found in the folder given in --data_dir argument. These should be numpy arrays of rank 2, where the first dimension is the sequence dimension, and the second one is the feature dimension. The files in the folder should be formated as [sequence_id].[feature_name].npy. The dataset will read which sequence ids to use for training from a file named base_filenames_train.txt on the same folder as the data, and then it will pick up the desired input and output modalities, according to the modalities specified (comma-separated) in the arguments --input_modalities and output_modalities. It will constract individual data points from these sequences, by specifying the length of window that you wish for each input modality (comma-separated) in --input_lenghts, and for each output modality (comma_separated in --output_lengths, you can provide offsets for each modality in --output_time_offsets and --input_time_offsets, both zero-indexed

In the image below you see an illustration of how a data point would look like with two input modalities (e.g. music, and movement), and one output modality (e.g. movement), with the specified lengths and offsets. This way of specifying data points is quite general and can conver a variety of tasks, including the multimodal autoregressive generation tasks we are studying here.

Note that although not a technical requirement for the above dataset to work, for more tasks, we expect the sequences to be sampled at the same frequency, and have the same length (the later requirement could be relaxed, as we are gonna take subwindows of different sizes, but it at the moment it's what it expects)

Most of the models studied here are designed to work with the above multimodal dataset, and so they will build a model to fit the corresponding data point structure (number, and lengths, of the input and output modalities). The modality dimensions (number of features) are specified in the --dins and --douts arguments.

The basic (multimodal) transformer model is a generalization of the model proposed in this paper, to work with any number of input or output modalities.

Here's an example of how it would look with the input and output modalities described above: 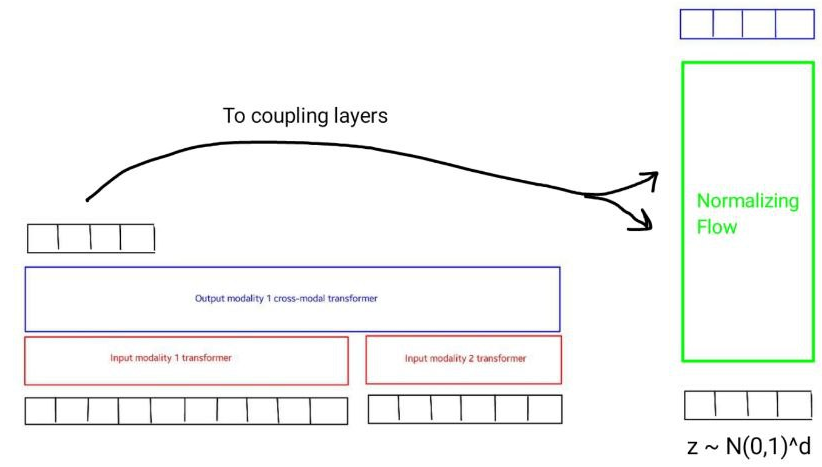 Within the normalizing flow there are a series of different architectural choices possible, some of which correspond to the model variations in the model folder.

You can see some more details in this post

A very quick summary of normalizing flows. Normalizing flows are implicit generative models, which also allow computation of the exact probability (so they are explicit at the same time? I find the nomenclature confusing). This is done because the function mapping the stochastic latent to the output is reversible. We usually define the following

The model is trained by exact likelihood maximization. We can compute the likelihood of the data, by using the transformation of variables formula, to compute P(X) as the determinant of the Jacobian of the forward flow, times Prior(f(X)), where Prior is the latent distribution (usually a standard Gaussian), and f(X) is the Z to which X is mapped by the forward flow. By the chain rule, the Jacobian determinant of the flow, can be decomposed into a product of the Jacobian determinant of each of the atomic operations in the flow. There are tricks to make these Jacobians more efficient to compute. sldj on the code I think stands for "sum of log determinant of Jacobian", as the product becomes sum after taking the log.

MoGlow made use of the coupling layers to make the NF conditional on the recent history, thus making the model autoregressive.

As an interesting recent development in NFs, there's FFJORD, which uses the interesting fact that as ODEs are reversible, one can use Neural ODEs to make NFs!

There's a recent review of different types of probabilistic deep generative models. However, it only focuses on images, so it is unclear how much their conclusions transfer to other domains. I think the question of which generative models work well for different tasks is a very interesting and valuable one, as these models are so fundamental and useful for real-world applications, where stochasticity and uncertainty means that we need to model probability distributions!

As a very quick summary, from that paper + my experience, the main advantages of NFs are:

The main disadvantages are:

Overall, at least in image world (less clear about other modalities), they produce better quality results than VAEs, but worse than GANs. However, they may be more stable and thus easier to train than GANs. I think GANs are worth giving a try, though. Other models that I think are worth giving a try are: VQ-VAEs and energy-based models, which have different strengths and weaknesses, but have both shown very good performance at modeling complex distributions (again mostly in images). VQ-VAEs are also state of the art at music modelling, and close to SOTA at image modelling, so they are worth looking at I think. I am giving NFs a try mostly because they are SOTA for motion modelling currently, and they have nice theoretical properties (thanks to exact inference)

We are compiling the dataset, which comprises several sources, and will release it soon.

Some parts of the dataset are already publicly available. The AIST++ dataset is available here, and most of the VR dances are available from several playing lists including this one, this one, this one and this channel. These dances can all be visualized in 3D in the VRChat world Papa Dance by lox9973. The VR dance videos can be converted to bvh (and retargetted to any humanoid skeleton) using this Unity tool, and the features processed as explained in the code. However, we will release the full set of features soon, so that it will be easier to replicate and build on this dataset:)

If you use models or code from this repo, cite us using

Add styles from famous paintings to any photo in a fraction of a second
20 September 2021
Transformers4Rec is a flexible and efficient library for sequential and session-based recommendation, available for both PyTorch and Tensorflow
23 September 2021
A model library for exploring state-of-the-art deep learning topologies and techniques for optimizing Natural Language Processing neural networks
22 September 2021