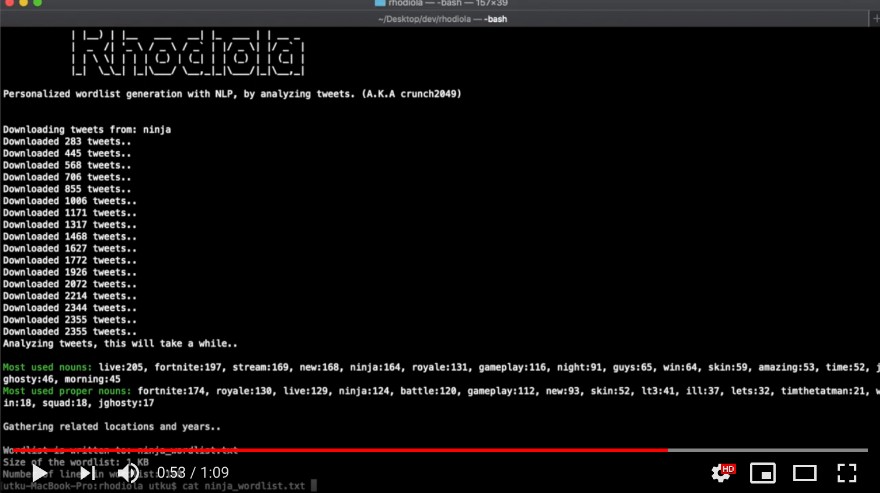 Personalized wordlist generator with NLP, by analyzing tweets. (A.K.A crunch2049)

Adversaries need to have a wordlist or combination-generation tool while conducting password guessing attacks. To narrow the combination pool, researchers developed a method named ”mask attack” where the attacker needs to assume a password’s structure. Even if it narrows the combination pool significantly, it’s still too large to use for online attacks or offline attacks with low hardware resources. Analyses on leaked password databases showed that people tend to use meaningful English words for their passwords, and most of them are nouns or proper nouns. Other research shows that people are choosing these nouns from their hobbies and other interest areas. Since people are exposing their hobbies and other interest areas on Twitter, it’s possible to identify these by analyzing their tweets. Rhodiola does that.

Rhodiola is written in Python 2.7 and tested on macOS, Debian based Linux systems. To install Rhodiola, run sudo python install.py on Rhodiola's directory. It will download and install necessary libraries and files. (Note:pip is required)

Rhodiola requires Twitter Developer API keys to work (If you don't have that one, you can bring your own data. Check the details below). You can get them by creating a Twitter app from here: https://developer.twitter.com/en/docs/basics/getting-started

After you get API keys, open Rhodiola.py with your favourite text editor and edit following fields:

Rhodiola has three different usage styles: base, regex and mask.

In the regex mode, you can generate additional strings with the provided regex. These generated strings will be appended as a prefix or suffix to the words. For this mode, Rhodiola takes a regex value as an argument. There is also an optional argument: ”regex_place” which defines the string placement (Can be:"prefix" or "suffix". Default value is "suffix").

In the mask mode, user can provide hashcat style mask values. Only \l (lower-alpha) and \u (upper-alpha) charsets are available.

Bring Your Own Data

An easy to use Natural Language Processing library and framework for predicting, training, fine-tuning, and serving up state-of-the-art NLP models.

A small example of an interactive visualization for attention values as being used by transformer language models like GPT2 and BERT.

This repository is intended to be a tutorial of various DNN interpretation and explanation techniques.