Austin is a Python frame stack sampler for CPython written in pure C. Samples are collected by reading the CPython interpreter virtual memory space in order to retrieve information about the currently running threads along with the stack of the frames that are being executed. Hence, one can use Austin to easily make powerful statistical profilers that have minimal impact on the target application and that don't require any instrumentation.

The key features of Austin are:

The simplest way to turn Austin into a full-fledged profiler is to combine it
with FlameGraph. However, Austin's
simple output format can be piped into any other external or custom tool for
further processing. Look, for instance, at the following Python TUI 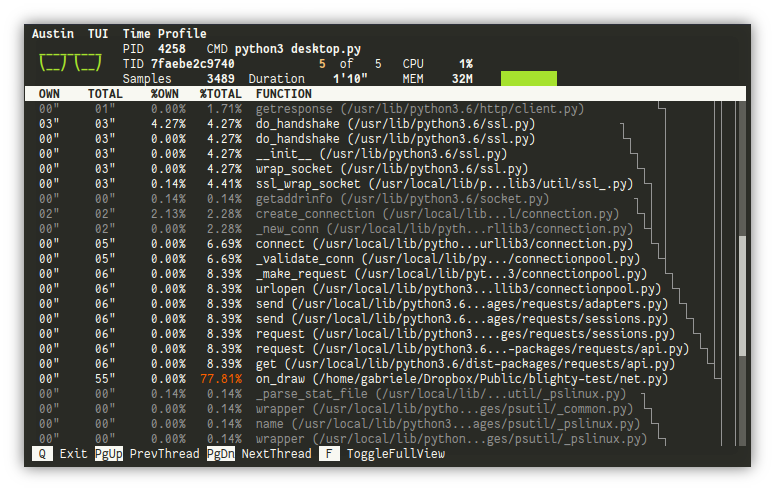 Austin is available from the major software repositories of the most popular
platforms.

On Linux, it can be installed using autotools or as a snap from the Snap
Store. The latter will automatically perform the steps of the autotools method
with a single command. On distributions derived from Debian, Austin can be
installed from the official repositores with Aptitude.

On Windows, Austin can be easily installed from the command line from the
Chocolatey repositories.

For any other platform, compiling Austin from sources is as easy as cloning the
repository and running the C compiler.

Installing Austin using autotools amounts to the usual ./configure, make
and make install finger gymnastic. The only dependency is the standard C
library.

Alternatively, sources can be compiled with just a C compiler (see below).

From the Snap Store

On Debian and Derivatives

On March 30 2019 Austin was accepted into the official Debian
repositories and can therefore be installed with the apt utility.

To install Austin from Chocolatey, run
the following command from the command line or from PowerShell

To upgrade run the following command from the command line or from PowerShell:

To install Austin from sources using the GNU C compiler, without autotools,
clone the repository with

On Linux one can then use the command

whereas on Mac OS it is enough to run

On Windows, the -lpsapi switch is needed

Add -DDEBUG if you need a more verbose log. This is useful if you encounter a
bug with Austin and you want to report it here.

The output is a sequence of frame stack samples, one on each line. The format is
the collapsed one that is recognised by
FlameGraph so that it can be piped
straight to flamegraph.pl for a quick visualisation, or redirected to a file
for some further processing.

By default, each line has the following structure:

where the presence of the process ID, the structure of [frame] and the number
and type of metrics on each line depend on the mode.

When no special switch are passed to Austin from the command line, the process
identifier is omitted and [frame] has the structure

The reason for not including the line number in the ([module]) part, as one
might have expected, is that this way the flame graph will show the total time
spent in each function, plus the finer detail of the time spent on each line. A
drawback of this format is that frame stacks double in height. If you prefer
something more conventional, you can use the -a option to switch to the
alternative format in which [frame] has the structure

Each line then ends with a single [metric], i.e. the sampling time measured in
microseconds.

Austin can be told to profile multi-process applications with the -C or
--children switch. This way Austin will look for new children of the parent
process. In this case, each sample will contain the process identifier to help
determine from which process the sample came from.

Austin uses syslog on Linux and Mac OS, and %TEMP%\austin.log on Windows
for log messages, so make sure to watch these to get execution details and
statistics. Bad frames are output together with the other frames. In general,
entries for bad frames will not be visible in a flame graph as all tests show
error rates below 1% on average.

Austin supports Python 2.3-2.7 and 3.3-3.8 and has been tested on the following
platforms and architectures

Due to the System Integrity Protection introduced in MacOS with El
Capitan, Austin cannot profile Python processes that use an executable located
in the /bin folder, even with sudo. Hence, either run the interpreter from a
virtual environment or use a Python interpreter that is installed in, e.g.,
/Applications or via brew with the default prefix (/usr/local). Even in
these cases, though, the use of sudo is required.

NOTE Austin might work with other versions of Python on all the
platforms and architectures above. So it is worth giving it a try even if
your system is not listed below.

When there already are similar tools out there, it's normal to wonder why one
should be interested in yet another one. So here is a list of features that
currently distinguish Austin.

The following flame graph has been obtained with the command

where the sample test.py script has the following content

To profile Apache2 WSGI application, one can attach Austin to the web server
with

Any child processes will be automatically detected as they are created and
Austin will sample them too.

The Python TUI that is currently included in this repository provides an
example of how to use Austin to profile Python applications. You can use
PageUp and PageDown to navigate the frame stack of each frame as the Python
application runs.

with the same command line as Austin.

The TUI is based on python-curses. The version included with the standard
Windows installations of Python is broken so it won't work out of the box. A
solution is to install the the wheel of the port to Windows from
this page. Wheel files
can be installed directly with pip, as described in the
linked
page.

Web Austin is yet another example of how to use Austin to make a profiling
tool. It makes use of
d3-flame-graph to display a
live flame graph in the web browser that refreshes every 3 seconds with newly
collected samples. Web Austin can also be used for remote profiling by
setting the WEBAUSTIN_HOST and WEBAUSTIN_PORT environment variables.

with the same command line as Austin. This starts a simple HTTP server that
serves on WEBAUSTIN_HOST if set or on localhost otherwise. The port can be
controlled with the WEBAUSTIN_PORT environment variable. If it is not set,
Web Austin will use an ephemeral port.

Austin output format can be converted easily into the
Speedscope JSON format. You can find a sample utility along
with the TUI and Austin Web.

where input is a file containing the output from Austin and output is the
name of the JSON file to use to save the result of the conversion, ready to be
used on Speedscope.

The ROOT system provides a set of OO frameworks with all the functionality needed to handle and analyze large amounts of data in a very efficient way.
19 January 2021
A cluster computing framework for processing large-scale geospatial data.
18 January 2021
A Parametric Framework to Generate Visual Illusions using Python.
15 January 2021