Take an image of a face you'd like to modify and align the face by using an align face script. I'd recommend the one here.

Then find the latents for the aligned face by using the encode_image.py script.

If the resulting image is not to your liking, play around with the vgg16 layer that is used and also modify/add loss functions.

The Image To Latent Model

The process of optimizing the latents with strictly just the features extracted by the VGG16 model can be timely and possibly prone to local minima. To combat this problem, we can use another model thats sole goal is to predict the latents of an image. This gives the latent optimizer model a better initilization point to optimize from and helps reduce the amount of time needed for optimization and the likelyhood of getting stuck in a far away minima.

Here you can see the the images generated with the predicted latents from the Image To Latent Model.

All of the training is located in the train_image_to_latent_model.ipynb notebook. To generate a dataset use the following command.

This will populate a directory at ./dataset_directory with 50,000 generated faces and a numpy file called wp.npy. You can then load these into the notebook to train a new model. Using more than 50,000 will train a better latent predictor.

What is a StyleGAN?

StyleGAN is a NVIDIA based work that enables the generation of high-quality images representing the image dataset that it was trained on with the ability to control aspects of the image synthesis.

What are latent codes (latents)? 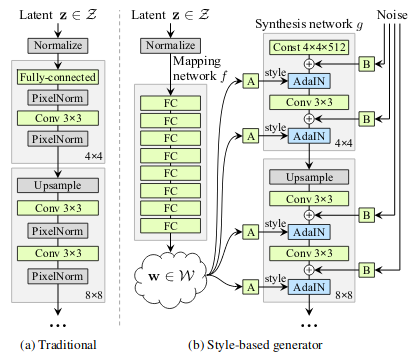 What are the benifits of using a mapping network to create a latent space?

Additionally, with StyleGAN the image creation starts from a constant vector that is optimized during the training process. This constant vector acts as a seed for the GAN and the mapped vectors w are passed into the convolutional layers within the GAN through adaptive instance normalization (AdaIN). This takes away the responsiblity of the GAN having to learn how to warp a uniform distribution into one that represents the data and allows it to simply focus on generating images. All of these aspects together allow for very high quality image generation.

How do latents (latent space) make it easier to modify an image?

A vector within the latent space W from the mapping network represents a fixed image with fixed features. If you take that vector and shift it across an axis, you modify the features of the image. If modified in soley the direction of a specific feature within the latent space W, everything about the image stays the same besides the feature that the vector (latent) is being shifted towards.

To make this more clear, imagine a vector that represents a male with short hair within the latent space W. If you'd like to keep the short hair, but generate a female version of a male, all you need to do is shift the vector in the direction of female without changing the direction of the length of hair.

This can be done with any discoverable feature within the latent space. For example, age and gender.

What you may notice from these transformations is that features are not completely independent. When changing one feature you often change many other dependent features.

Okay, we have a query image we want to modify. How do we get the latent representation of that query image so that we can modify it? 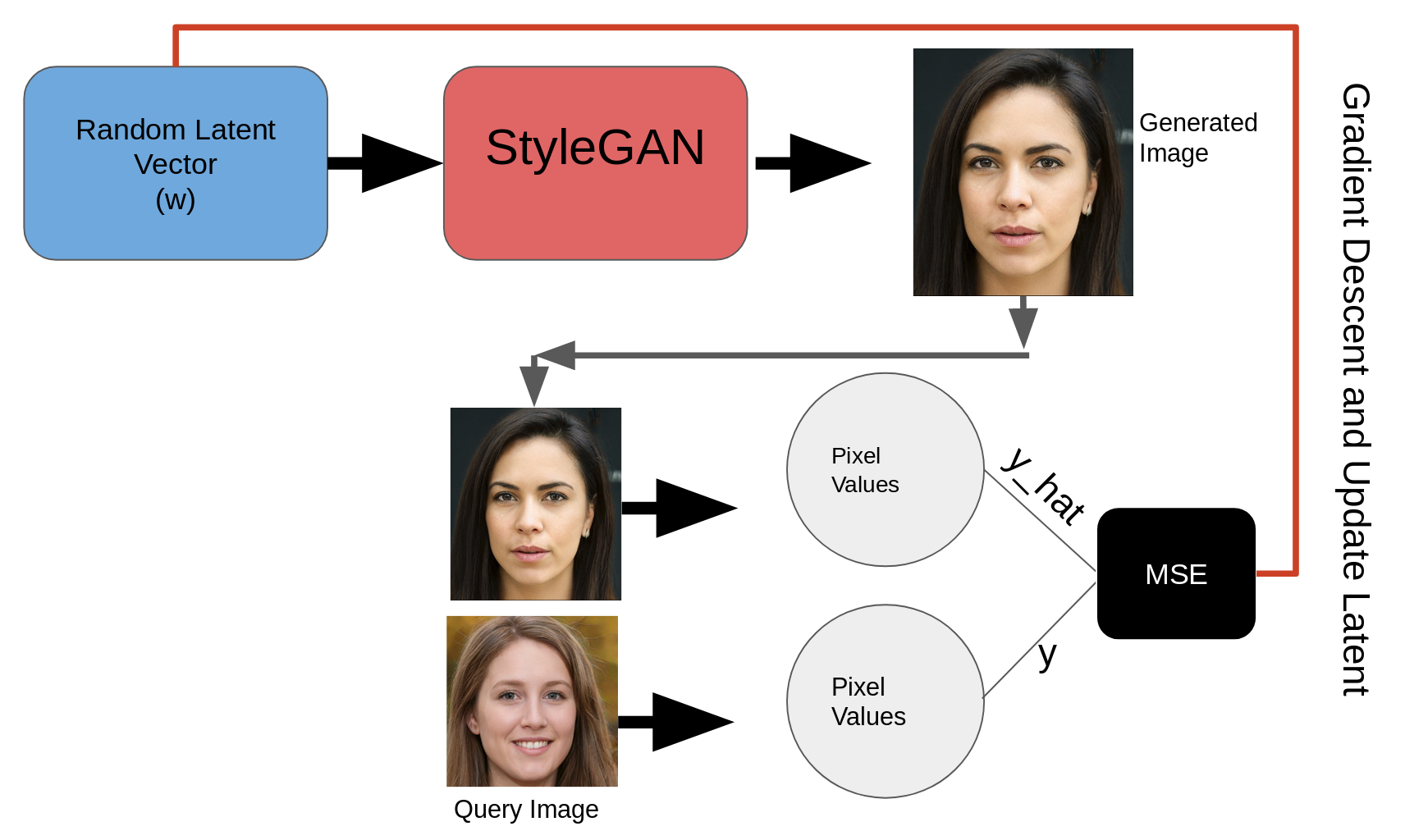 The issue with this is that it turns out to be really difficult to optimize from pixel differences between images without a specialised loss function.

To get around this issue, instead of comparing pixel-wise you can compare feature-wise by extracting the features of both images through a pretrained feature extractor like VGG16 and forgoing the use of the final fully-connected classification layers. Featurewise optimization works much better in practice with simple loss functions like MSE. 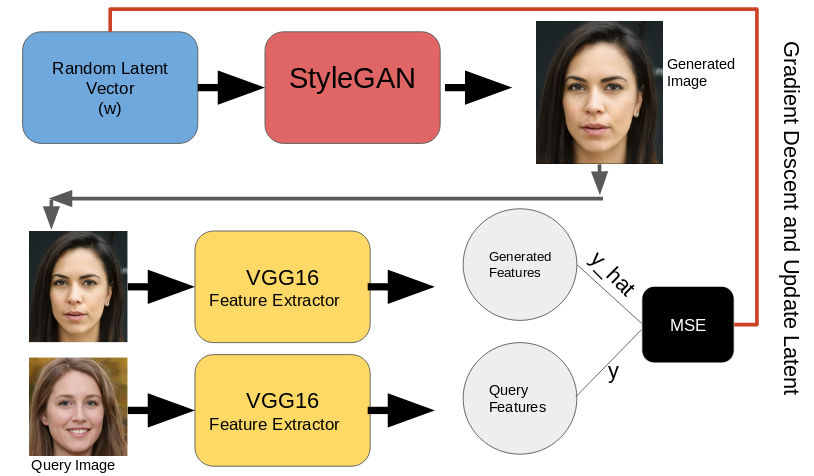 What if instead of a random latent vector as a starting point, we could speed up the optimization process by making a really good guess as to what the query image's latent vector is? This is where a machine learning model called the Image To Latent model comes in. I've talked about it briefly here

How do we discover features within a latent space to modify latent representations?

Simply put, one can use support vector machines or other classifiers to discover a seperating hyperplane that within the latent space seperates the features of interest from other features. To edit the face you then can take the normal of the hyperplane and travel in the direction of the normal. This in returns modifies the latent code of the query image and in return modifies the generated image.

This is all talked about here.

The purpose of this reposity is to create the latent space representation of a query image and not the editing as the editing is a relatively simple process.