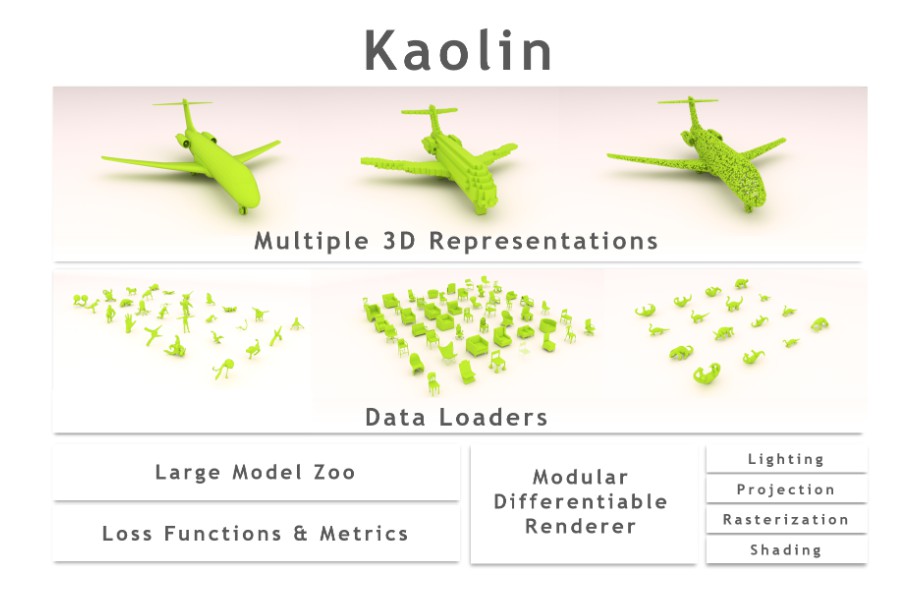 NOTE: The API is currently somewhat unstable, as we're making constant changes. (It's a beta release)

Kaolin is officially supported on Linux platforms and has been built and tested on Ubuntu 18. Windows and Mac support should be considered experimental.

We highly recommend installing Kaolin inside of a virtual environment (such as ones created using conda or virtualenv). Kaolin expects Python 3.6+, and currently needs a CUDA-enabled machine (i.e., with nvcc installed) for the build.

Now, you can install the library. From the root directory of this repo (i.e., the directory containing this README file), run

During installation, the packman package manager will
download the nv-usd package to ~/packman-repo/ containing the necessary packages for reading and writing Universal Scene Description (USD) files.

To verify that kaolin has been installed, fire up your python interpreter, and execute the following commands.

To delve deeper into the library, build the documentation. From the root directory of the repository (i.e., the directory containing this README file), execute the following.

To run unittests, from the root directory of the repository (i.e., the directory containing this README file), execute the following commands.

The time series forecasting package for the tidymodels ecosystem.

This repo shares models from PolyAI publications, including the ConveRT efficient dual-encoder model.