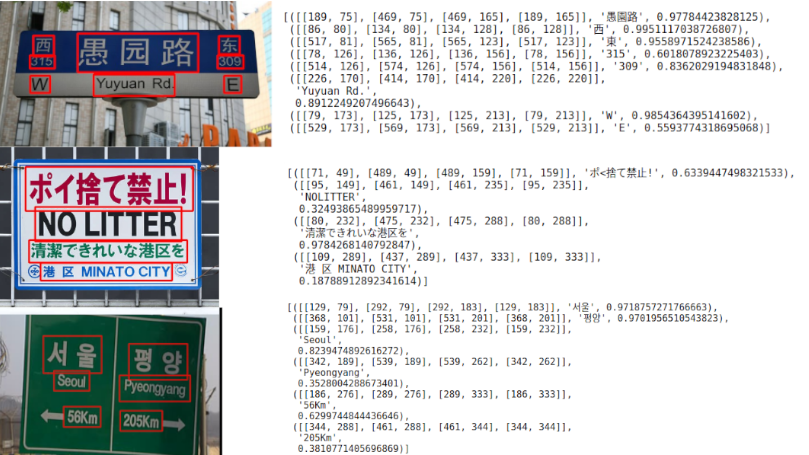 We are currently supporting following 42 languages.

List of characters is in folder easyocr/character. If you are native speaker
of any language and think we should add or remove any character,
please create an issue and/or pull request (like this one).

Output will be in list format, each item represents bounding box, text and confident level, respectively.

In case you do not have GPU or your GPU has low memory, you can run it in CPU mode by adding gpu = False

There are optional arguments for readtext function, decoder can be 'greedy'(default), 'beamsearch', or 'wordbeamsearch'. For 'beamsearch' and 'wordbeamsearch', you can also set beamWidth (default=5). Bigger number will be slower but can be more accurate. For multiprocessing, you can set workers and batch_size. Current version converts image into grey scale for recognition model, so contrast can be an issue. You can try playing with contrast_ths, adjust_contrast and filter_ths.

This project is based on researches/codes from several papers/open-source repositories.

Detection part is using CRAFT algorithm from this official repository and their paper.

Recognition model is CRNN (paper). It is composed of 3 main components, feature extraction (we are currently using Resnet), sequence labeling (LSTM) and decoding (CTC). Training pipeline for recognition part is a modified version from this repository.

Beam search code is based on this repository and his blog.

And good read about CTC from distill.pub here.

A GUI for Nvidia's GauGAN/SPADE like shown in the tech demo.

tract is a Neural Network inference toolkit. It can read Tensorflow 1, ONNX or NNEF, optimize them and run data through them.

In general solution is based on frame-by-frame classification approach. Other complex things did not work so well on public leaderboard.