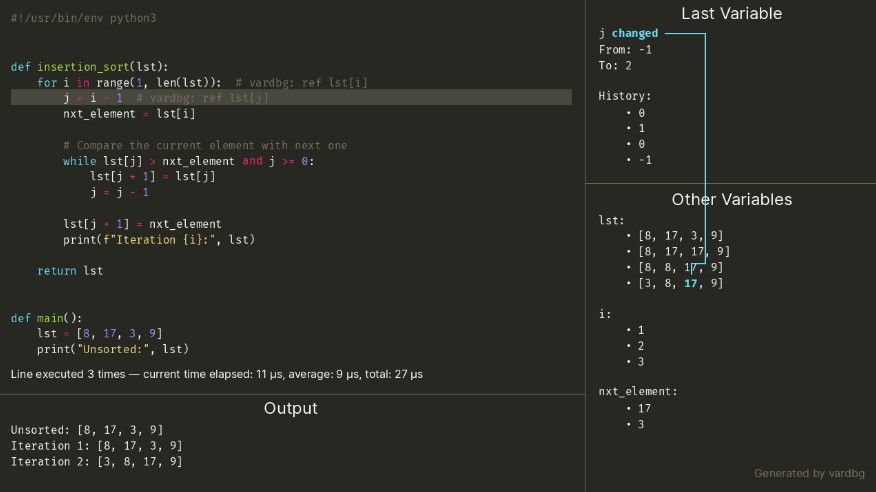 A simple Python debugger and profiler that generates animated visualizations of program flow. It is meant to help with learning algorithms by allowing you to visualize what the algorithms are doing.

Python 3.6 or newer is required due to the use of f-strings.

This project was created during Google Code-in 2019 for CCExtractor Development.

The latest tagged version can be obtained from PyPI:

Alternatively, one can clone this repository and run it directly after installing dependencies:

It can also be installed from the repository:

The above instructions assume the use of a virtual environment to avoid interfering with the system install of Python.

All of the debugger's subcommands and options are documented in the usage help, which is readily available on the command line.

For example, this command will debug the function quick_sort from the file sort.py with the arguments 9 3 5 1 and record the session to a JSON file named sort1.json:

A video can then be generated from the above recording:

It is possible to generate videos live while running the debugged program, but this is discouraged because the overhead of video creation inflates execution times greatly and thus ruins profiler results. However, if profiling is not important to you, it is a valid use case.

The video generator has many options: resolution, speed, fonts, and sizes. These options can be modified using a TOML config file. The default config documents the available options, which can be customized in an minimal overlay config without having to duplicate the entire config. The config can then be used by passing the -c argument on the command line.

An example of a simple overlay is the config used to generate official demo videos for embedding in READMEs. This simple config increases the speed (FPS) slightly and adds an intro screen at the beginning of the video.

Special comments can be added to lines of code that define variables to control how vardbg handles said variable:

Specifying the name of the variable may appear to be redundant, but there are two reasons behind this: reliably parsing all code that defines variables is very hard (there are more possible methods than one might think — loops, unpacking, direct assignments, exec calls, etc.), and more than one variable can be declared on a line. For example, tuple unpacking and function arguments are common occurrences of multiple variables being added on a single line. Thus, specifying the variable name in references is mandatory to prevent ambiguity.

A DevOps Tools Path to Production for DevOps Learning and Design. Design with Web Component can use it any page.