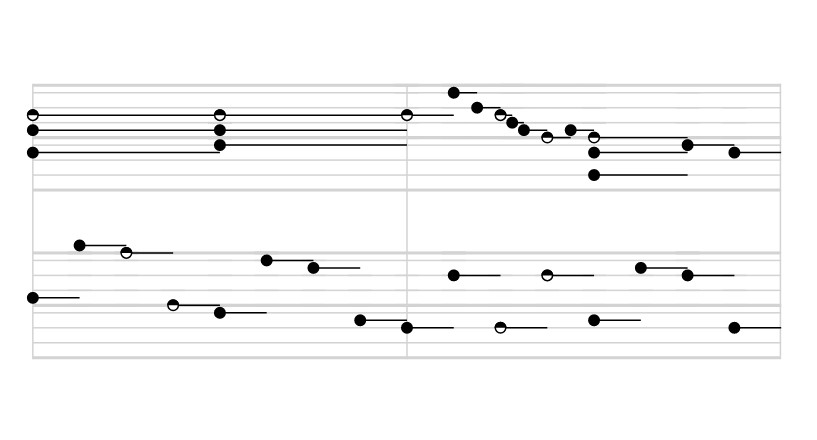 I got frustrated with the inconsistencies and (what I perceived as) unnecessary complexity in modern music notation. All I want to know is where to put my fingers. Note length, tempo, velocity, progression and other stuff are minor worries in comparison. Those things can be felt, without learning.

I wanted to create a simple and consistent music notation, along with parsers, converters and whatnot. Turns out writing beautiful renderers is tough, and it can get quite ugly with edge cases and the variety of sheets out there. I haven't yet had the motivation to finish anything considerable, so instead for some peace of mind, I'm documenting the envisioned notation here.

This is written from the perspective of a clueless piano beginner who just wants to play.

I haven't spent much time on tuning the rendering; this is just to give a rough idea.

I've included a barebones parser and renderer. I'm trying to keep the code as short and simple as possible, and focus on ironing out the worst of issues. I don't want to deal with wrapping, justification and the plethora of other visual adjustments at this point.

Note value and accidental are encoded in the shape of the note.

Natural, sharp and flat notes have the following shapes:

The stem is horizontal, and as long as the note duration.

Python assignments for the machine learning class by andrew ng on coursera with complete submission for grading capability and re-written instructions.

Curve is an open-source tool to help label anomalies on time-series data.