some scripts to print out images of pokemons to terminal. Inspired by
DT's colorscripts compilation

Prints out colored unicode sprites of pokemon onto your terminal. Contains
almost 900 pokemon from gen 1 to gen 8. Has all the pokemons you could ever want
(okay it doesn't have shiny pokemon or different forms, but cut me some slack)

demo of the program being used

demo of the program running on terminal startup. 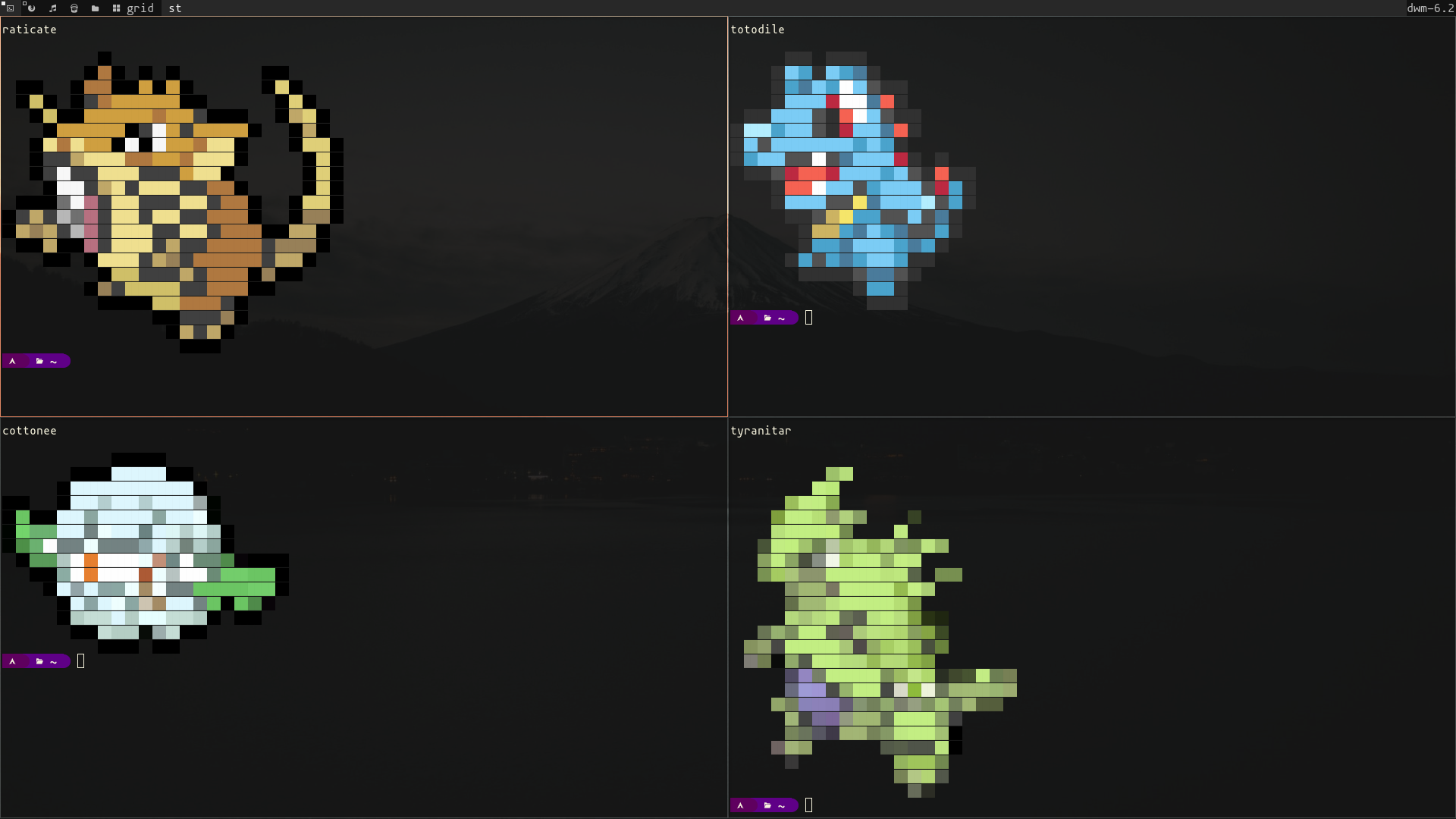 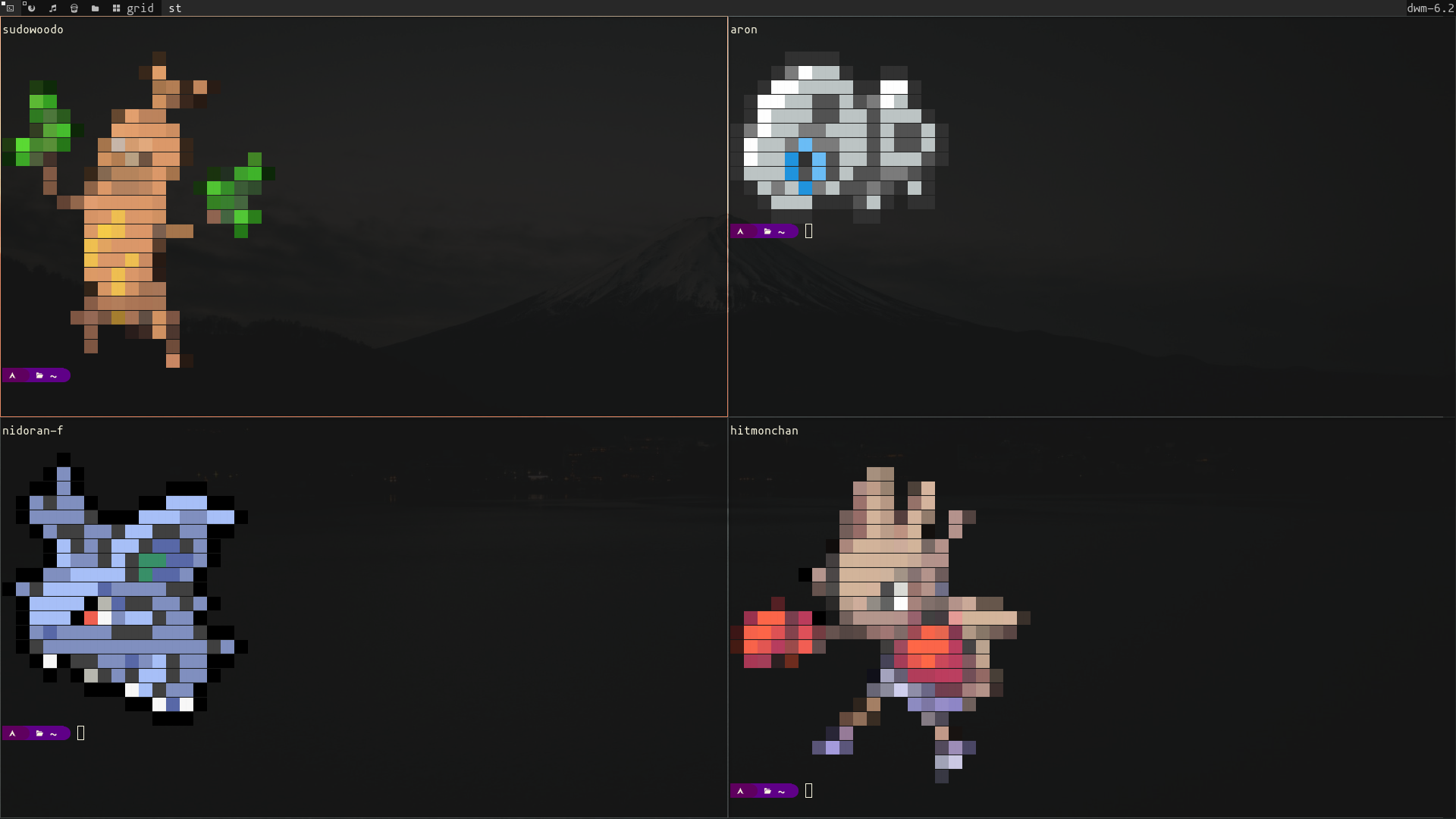 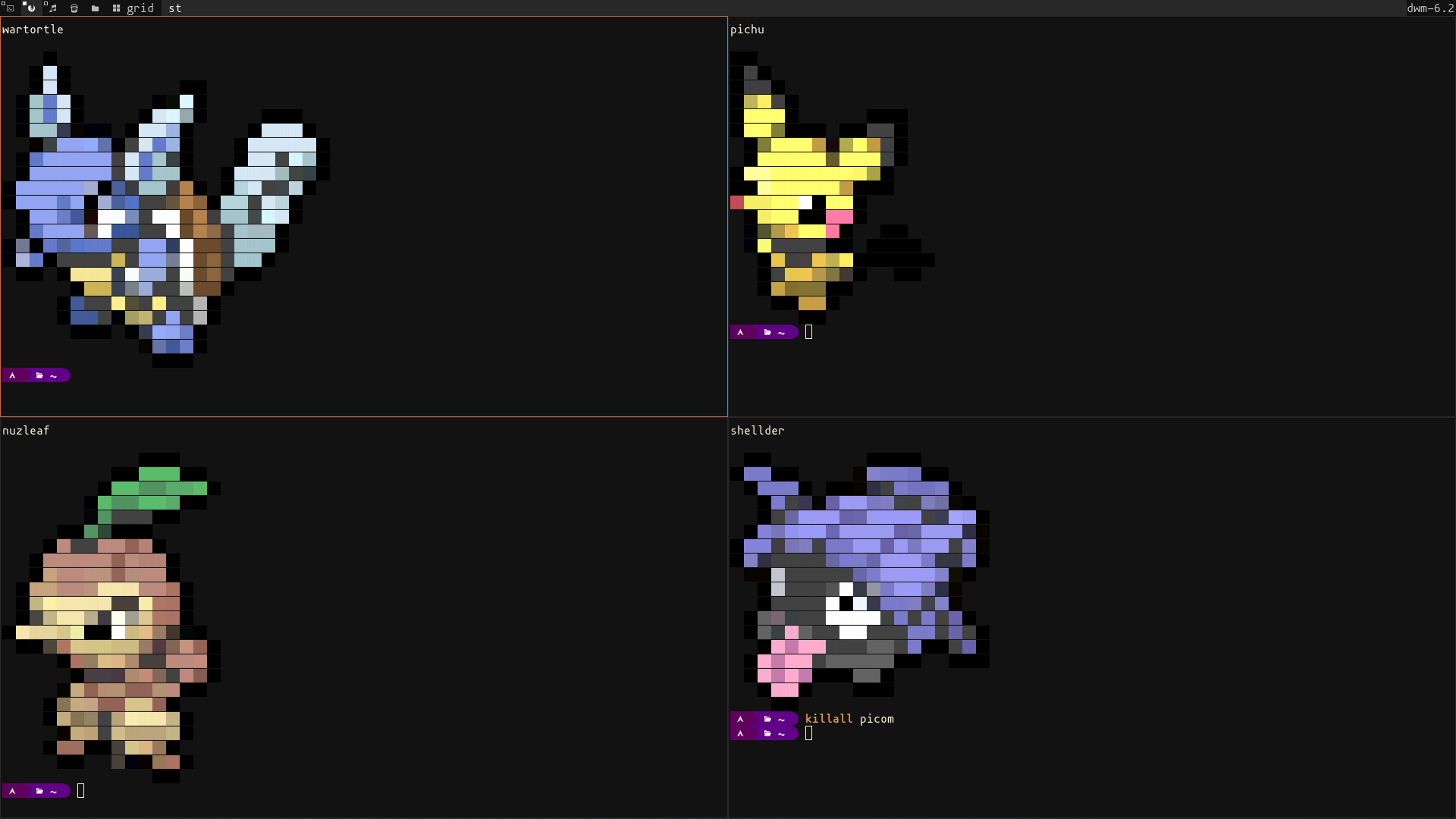 The program itself is just a shell script that prints out custom color formatted
text files.So as long as you have a POSIX compliant shell like dash,bash,zsh etc.
as your /bin/sh the script should work.
You will however need a terminal with true color support, which most
modern terminals have. More on terminals and color support can be found in
this gist

Download the code from this repository or use git clone

cd into the directory and run the install script

now the program should be installed. You can check this by running

which should print out the help page for the program

You can run the program from the command line to either display a pokemon of your
choice by specifying the pokemon name or make it display a random pokemon.

example of printing out a specific pokemon

example of printing out a random pokemon

these are rare exceptions and if required you can parse the --list page to see
the names of all the pokemon.

You can display a random pokemon whenever a terminal gets launched by adding
the pokemon-colorscripts -r command to your .bash_profile or .zsh_profile.

location of the files

The program itself is a simple bash script that prints out text files corresponding
to the relevant pokemon or a randomly selected pokemon. The textfiles formatted with
appropriate colors can be found in the colorscripts folder of the repo. The sprites
were taken from pokemondb and were converted into text
files using a custom python script after some preprocessing. A simple script to
scrape and download all the sprites, and the python script to convert these sprites into properly formatted and colored
text files are also included in the repo and can be found in the generator_scripts folder.

It's a simple python package to play videos in a terminal using ASCII characters.
21 June 2021
termplotlibtermplotlib is a Python library for all your terminal plotting needs. It aims to work like matplotlib. Line plotsFor line plots, termplotlib relies on gnuplot. With that installed, the code import termplotlib as
23 September 2021
Python Tensorflow 2 scripts for detecting objects of any class in an image without knowing their label.
20 September 2021