The main aim of this project is to recognize voice of the user as input and convert that input voice into the text form.

Libraries Used Inside the Project

We have used Speech Recognition module of Python to accomplish this mission. Inside it we have modules like PyAudio which helps us to play and record audio.

Also, we have used the MySQL connector module for connecting our Python program to our MySQL database.

Libraries Created During the Project

We have created a library named MySQLvoice which helps our Artificial Intelligence to manage and organise the databases.

The main aim of this module is to select the keywords from the given input. After selecting the keywords our Artificial Intelligence start working on the database and provide the required results.

How We Converted the Voice into Text

After recognizing we printed the input into the text form to check the durability of our program. 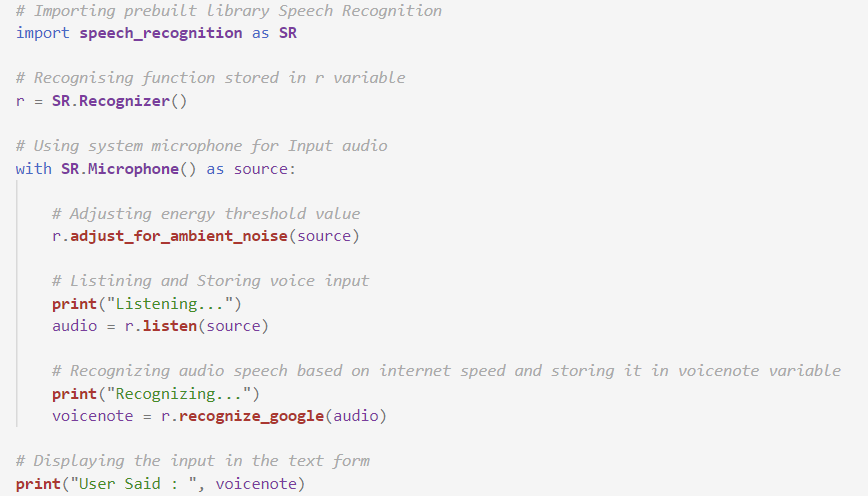 Using MySQLvoice library user doesn’t need to know SQL database languages to make any changes or to know anything about their database. We have announced eight new keywords as follows:

How to Install and Run the Project

Once the MySQLvoice pip package is uploaded on PyPI, you can directly write “pip install MySQLvoice” in your respective terminals
to install it in your system. After installing you can import it in your Python compiler and get benefited.

How to Use the Project

This Project is limited to MySQL Database operations but it can be used in all regions of the world for handeling databases as
it is very easy to develop for regional languages. We are mostly working in common English language but it has the capability
to be coded for any languages spoken in the world like Kannada, Korean, Japenese, Hindi, Gujrati etc. It will help the Non-Technical
person to handle databases with ease.

This project will help a lot of indutries and business as they are able to manage and organize their databases with thier voice. Also it will reduce the work load to a greater extent.

This project is just a small example of Artificial Intelligence related Database Management.

This project was jointly created by: